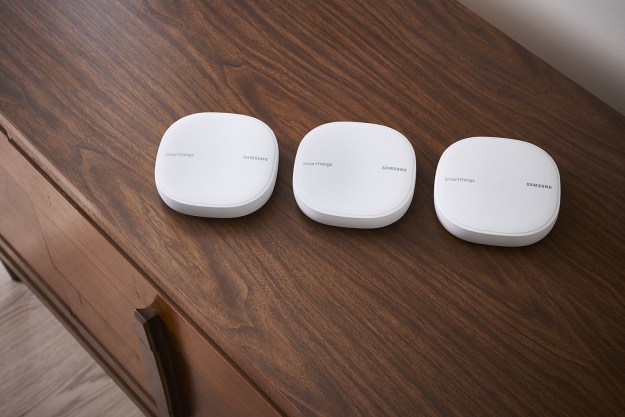 If you think that the humble home router is one of the less interesting devices in your smart home arsenal, then it’s time for a fresh look. Last year we saw a new generation of stylish, mesh Wi-Fi hubs replace lumpy, antenna-laden routers across the world. Google Wi-Fi, Netgear Orbi and friends didn’t just look good – their innovative “hub and satellite” design delivered stronger network connections and improved speeds around the home.

In the second half of 2018, we welcome the next generation of mesh Wi-Fi systems, and this year’s theme is all about convergence. The newly announced Netgear Orbi is packing both Amazon Alexa and a Harmon Kardon smart speaker, while the updated TP-Link Deco M9 Plus is adding smart home device control to the mix, with Bluetooth and Zigbee radios joining traditional Wi-Fi connectivity.

It follows a path previously trodden by Samsung Connect Home, the Korean tech giant’s first attempt to mash-up a mesh Wi-Fi router with a SmartThings controller. We loved the concept and the hardware looked great, but poor networking performance and clunky controls meant we couldn’t give Connect Home a full endorsement.

SmartThings Wi-Fi is Samsung’s second attempt to crack convergence. With a significant price cut ($280 for a three-pack with single hubs available for $120), this new model looks very similar to Samsung Connect. Under the hood, however, things are different, with Samsung partnering with network-specialist Plume to improve the system’s Wi-Fi performance.

An early innovator in mesh Wi-Fi, Plume’s technology is popping up in a host of third-party devices, courtesy of telco partnerships with Comcast, Bell and others. Like Samsung Connect Home, our experience with Plume’s own devices to date has been underwhelming. Let’s see if this latest collaboration changes our view.

If it ain’t broke, don’t fix it

While SmartThings Wi-Fi benefits from a lower price and a brand-new engine, visually, the new system looks very similar to last year’s model – and that’s no bad thing. The puck-shaped devices have a slight color-change and a new, matte finish which is a touch more sober than Connect Home, but it’s basically the same chassis.

While more aesthetically appealing in the home than clunky, traditional routers, like all mesh Wi-Fi systems, SmartThings Wi-Fi suffers when it comes to wired connectivity. One significant weakness compared to competitors is a lack of wired backhaul support, which means that the hubs must connect wirelessly, limiting speeds. There’s also no USB port for storage sharing.

Like the first-generation system, a single hub should deliver a range up to 1,500 feet, while the three-pack we’re reviewing today is good for homes up to 4,600 square feet. Mansion-dwellers can add up to 32 hubs for mega-coverage.

Installing and configuring SmartThings Wi-Fi using SmartThings’ app-hosted setup is simple enough. Plug in, set up an account, configure your wireless network name and a password, and the basics are done.

From there, you can proceed to hook up any additional hubs around the home. One particularly neat feature is the system’s ability to automatically detect Wi-Fi hubs available for connection. They’ll pop up in the SmartThings app, and you’ll be guided step-by-step through configuration.

Once everything is hooked up, Plume’s integrated mesh Wi-Fi technology continuously monitors connection quality between the hubs and, where possible, will try to optimize performance automatically. It’s all quite seamless.

With an internal smart home hub and third-party mesh wireless support, Samsung SmartThings Wi-Fi comprises a heady mix of tech that, integrated poorly, could result in a horrible user experience. The good news is that, this time around, the SmartThings app does better job of guiding you through the sheer wealth of features on offer. But, where apps for Google Wi-Fi and Netgear Orbi offer an oasis of calm, SmartThings is a busy, bustling hub, packed with guides and walkthroughs to help you make the most of SmartThings Wi-Fi. That’s partly good news, but with 14 notifications waiting to be read as soon as we set up the router, taking your second and third steps with Samsung SmartThings Wi-Fi can be overwhelming.

It doesn’t help that network management features are split across two separate mobile apps. The SmartThings app supports basic network status reporting, Internet speed testing and basic access controls that allow you to cut Internet access to specific devices. For everything else, you’ll need to download and install a standalone Plume app and, like most mesh Wi-Fi systems, you can’t manage network setting in your PC’s browser.

Fortunately, the Plume app is strong, supporting handy features like guest Wi-Fi access, device speed testing and advanced network features such as static IP addressing, port forwarding, subnet controls and DNS configuration. If you wish, you can even break out discrete networks on each hub. Of course, you won’t find the swathe of settings available on traditional routers such as parental controls. The offering was surprisingly lean, but otherwise, SmartThings Wi-Fi offers a reasonable selection of network features that are simple to manage.

We placed three hubs around a four-floor, 2,500 square-foot home. The main hub was positioned next to the cable modem in a second-floor bedroom. One satellite hub was placed a floor above in the attic, while the third was installed two floors below in a basement where Wi-Fi coverage is patchy.

Thankfully, short range wireless performance was more competitive. An average speed of 426 Mbps couldn’t quite top last year’s Samsung Connect Home Pro result, but is well ahead of the pack. Of course, much of reason you’d buy a mesh Wi-Fi system is for strong performance throughout the home – so how did Samsung SmartThings Wi-Fi stack up against the best?

We wandered around the home with a Microsoft Surface Pro 4, testing wireless speeds when connected in a bedroom, where the main hub was located, and in the attic and basement. We placed sub hubs in these two rooms at the extremes of the house, where wireless connectivity is patchy.

In tests, we found that Samsung SmartThings Wi-Fi performed much better than last year’s Connect Home model, with reasonably strong wireless network connectivity and solid speeds that would be more than sufficient for work, web browsing and social media as well as more bandwidth intensive activities like video streaming. In the basement, our most problematic room, an average speed of 91 Mbps places Samsung SmartThings Wifi in the middle of pack on performance. A fair result, but most definitely behind leading systems from Netgear and Linksys.

Many mesh Wi-Fi systems support a feature known as “wired backhaul,” which optimizes network speeds by using Ethernet connections between the hubs. This feature was available on Samsung Connect Home, although in tests, we found it didn’t boost speeds significantly. With SmartThings Wi-Fi, however, hubs can only be connected wirelessly. As such, while this new collaboration with Plume has certainly enhanced the system’s wireless speeds, poor wired networking performance means SmartThings Wi-Fi is not the all-rounder we hoped to love.

Samsung SmartThings Wifi is protected by a one-year warranty.

Samsung’s collaboration with Plume has resulted in a better wireless router than the company’s previous generation. But it’s also introduced some weaknesses. Slow wired speeds, a lack of Ethernet backhaul and fragmented app controls means there are better mesh Wi-Fi systems available from competitors, although few offer smart home control.

That said, if space is a premium – for example in smaller apartments – or you simply don’t need wired connectivity, the convergence of a smart home controller and a solid wireless router is certainly a bonus. If you’re prepared for a little complexity, you’ll appreciate SmartThings Wi-Fi’s convenience.

If you’re simply looking for the fastest overall mesh Wi-fi system around, both Netgear Orbi and Linksys Velop offer great performance across both wired and wireless connections, without the convenience of smart home control. Otherwise, check out the new TP-Link Deco M9 Plus which also offers converged networking and smart home control but, unlike SmartThings Wi-Fi, lacks Z-Wave support.

Samsung is still relatively new to the networking game, so SmartThings Wi-Fi remains somewhat of an experiment. The collaboration with Plume on networking means there’s more moving parts than we’d like when it comes to support. However, Samsung continues to invest in the SmartThings brand, so on balance, you should be confident that SmartThings Wi-Fi will be supported over the long term.

If you’re short on space and the idea of a one-box Wi-Fi and smart home controller appeals, SmartThings Wi-Fi will do the job, albeit with some complexity to manage. If wired networking speeds are important to your household, you may wish to stick with standalone devices.

Amazon’s annual fall hardware event will take place on September 28
IFTTT routines for fall
The best motorized smart blinds for 2022
The best video doorbells for 2022
Best oven deals for September 2022
HelloFresh Free Trial: Can you get your first box for free?
This massive French door air fryer is insanely cheap today
The iRobot Roomba and Braava Jet have sweet discounts today
How to sell your parents on a smart assistant
Best Amazon Echo Deals: Get an Echo Dot for $25
Keurig’s new SMART brewers offer a mind-blowing amount of coffee drinks
The best smart locks for 2022
Best security camera deals for 2022