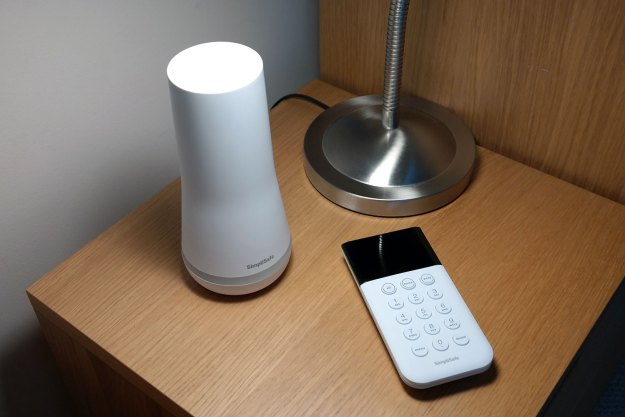 If you’re concerned about home security but lack the time (or inclination) to research the myriad products available, a one-box solution like SimpliSafe Protect may calm your fears. This starter kit is part of a larger range of smart home security lines that includes alarms, sensors, cameras, and more with 24/7 professional monitoring support.

With just 20 percent of Americans currently protected, smart home security is about to boom: Amazon is pushing beyond smart doorbells into 360-degree smart home security with its recent acquisition of Ring, for example, competing with Google’s Nest Secure and newcomers like Abode. SimpliSafe may not (yet) be a household name, but the company has been in the home security game for more than ten years, and a recent injection of capital sees the company valued at over $1 billion.

So, with the company’s third-generation system on the shelves of your local big-box store, there’s no better time to check out SimpliSafe.

In 2018, secure, smart, and simple are no longer the smart home device differentiators they once were. Now, consumers are also demanding style. Cheaply-built Kickstarter kits may have been good enough in 2014, but streamlined systems like Nest Secure have raised the game, thanks to beautifully crafted sensors and curvy keypads.

In response, SimpliSafe collaborated with design gurus IDEO to reinvent smart home security hardware – with elegant results. The SimpliSafe base station is the star of the show, resembling the fruits of a one-night stand between Amazon Echo and Google Home. Armed with a high-quality speaker, 95dB siren, and no-charge cellular and Wi-Fi connectivity, the powerful hub blends beautifully into the background. But when called in to action, you and your intruders will know it’s there. An on-board battery backup provides continued protection in the case of a power outage.

While other components lack the same visual impact, exploring the beautifully presented starter kit uncovers a generous array of smart home sensors and controllers. You can customize the kit contents when you order your system, so pricing will vary depending on your needs – otherwise, pick a preconfigured bento box of your choosing.

For comparison purposes, a custom selection of SimpliSafe’s kit closely matching the $199 Ring Protect system (base station, keypad, one entry sensor and a motion detector) is priced at $229 – a little more expensive, but as we’ll discuss shortly, SimpliSafe’s hardware is more advanced.

The base station is accompanied by a large, wall mountable keypad, used to arm and disarm the system. Unlike Nest and Ring, the SimpliSafe keypad includes a monochrome display and is used for system configuration as well as arming. This new device is more compact than the previous generation and includes a larger, brighter screen, illuminated keys, and longer signal range. Soft-touch plastics and sleek lines ensure a neat match with the base station, but clicky controls (where you press down on the sides of the screen to navigate) and annoying beeps, which accompany each command, cheapen the experience. An oversized key fob can also be included to toggle protection.

Four entry sensors, designed for windows and doors, are neat enough but lack the finesse and premium finish of Nest Secure. A motion sensor fits neatly into a corner between the wall and ceiling (or it can sit on a desktop) and you’ll also find a standalone panic alarm, water leak sensor, and freeze sensor included in the box. For convenience, most sensors include self-adhesive backing, but screws are also included for permanent mounting.

To help ward off potential intruders, a large yard sign and window stickers boasting SimpliSafe’s 24/7 home monitoring protection are also included. Add an extended selection comprising smoke and CO2 alarms, security cameras, plus an upcoming smart doorbell and lock, and it’s clear that SimpliSafe is one of the most comprehensive security systems available on the market today.

Voice-guided configuration is simple, once you get used to a physical keypad

As you’d expect, given the number of components included, installing the system takes a little time, although you’ll find the starter kit is partially preconfigured for you when it arrives. You’ll obviously need to invest some time figuring out the best placement for the various sensors and other triggers included in your kit. Once physically installed, you simply press a button on each component to register, then you’ll be asked to enter a personalized name for it on the keypad. An included test mode allows you to walk round the home pressing each button once again to check all devices are operational.

A lack of smartphone integration out of the box is a real disappointment.

SimpliSafe apparently connects to the cellular network automatically, but in the past a lack of signal strength has left users somewhat in the dark. Wi-Fi support has been added to this latest generation, so dig into the keypad settings once again and you’ll find that connecting the system to your home network is straightforward enough, if you remember to do so.

The process – once you get reacquainted with using a physical keypad rather than a smartphone app – is simple, and voice prompts from the base station’s high-quality speaker ensure you’re never lost.

Blends beautifully into the background, but you’ll need to pony up for full features

Once you’re up and running, you’ll find that SimpliSafe is mostly invisible, unless there’s a problem. For us, that’s a big plus. Large “home” and “away” buttons on the keypad and key fob make arming and disarming the system very easy, and we found the sensors to be robust and very responsive. Activating the base station alarm and keypad notifications took less than a second.

At 1,000 feet, SimpliSafe boasts a better sensor range than both Nest and Ring, while also besting competitors with a battery life of between five to seven years.  However, a lack of smartphone integration out of the box is a big disappointment. SimpliSafe offers both a web app and a mobile app, but without subscribing to the company’s $15 per month home monitoring service, you’ll only find basic features included, such as home monitoring activation, camera monitoring, and account management.

Once active, the service opens remote notifications and app control as well as 24/7 human monitoring. When your alarm is triggered, your base station will notify the monitoring center, who’ll contact you (and other designated family or friends). False alarms can be easily disabled via a safe word, otherwise, police or the fire department will be dispatched to your home.

We love the low price and comprehensive home protection offered by SimpliSafe, but would prefer to see remote notifications and system access available without paying for full home monitoring.

SimpliSafe is protected by a three-year limited warranty, well ahead of both Nest Secure (two years) and Ring Alarm (one year).

If you’re thinking of protecting your home with a remote monitoring service, opting for SimpliSafe makes a lot of sense. A low-price service subscription with 24/7 monitoring, remote access, high-performing sensors, and stylish security hardware is a compelling combination.

SimpliSafe certainly offers real value and performance, even without home monitoring, but the lack of remote app access and notifications weakens the proposition. That said, such a comprehensive selection of sensors and supporting hardware makes SimpliSafe a fantastic pick for 24/7 home protection.

At $499 Nest Secure features gorgeous hardware, but fails to compete on price and lacks the sheer range of security sensors offered by SimpliSafe. At $199, Ring Alarm is a more compelling competitor. Again, it lacks SimpliSafe’s breadth, but Ring is rapidly building out its security hardware ecosystem, making it one to watch. For now, a comprehensive selection of sensors, supporting hardware and monitoring services makes SimpliSafe a fantastic pick for 24/7 home protection.

SimpliSafe is one of the original pioneers of smart home security, and a significant injection of capital means they’re going to be around for some time to come. Buy with confidence.

Good looking hardware, a comprehensive selection of sensors and supporting monitoring services makes SimpliSafe a fantastic pick for 24/7 home protection. Simply put, SimpliSafe is among the best home security systems on the market.