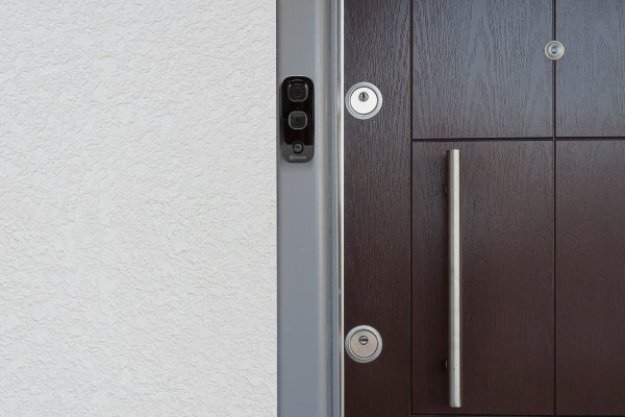 “It's not perfect, but a few software patches could make the SwannBuddy Video Doorbell a far greater option.”

The SwannBuddy Video Doorbell is an impressive piece of technology, with high-resolution streams, an array of sensors, and a budget-friendly price point. It serves as a strong entry point into the world of smart home security, especially right now at the start of the holiday season.

It competes against other products similarly new to the market, like the Blink Video Doorbell. The SwannBuddy makes a name for itself as a great option for people that live in apartments (or just those that aren’t the savviest with tools) because it doesn’t need to be hardwired. It can run on batteries alone, while delivering performance on par with much higher-end video doorbells.

That said, the SwannBuddy isn’t perfect. Although I found it easy to set up and use, there are several places where I feel the video doorbell could improve.

The SwannBuddy Video Doorbell isn’t hard to set up, but the included instructions are a bit confusing. If you can’t hardwire the doorbell to anything, like if you live in an apartment or your doorbell doesn’t have a C-wire, don’t worry — you can attach it with the included adhesive straight to your door.

You’ll need to charge the battery first, a process that can take up to six hours. An included USB charger means you just have to plug the SwannBuddy in, and a light on the front of the camera will let you know when it’s fully charged. The battery life is pretty impressive; after a week of frequent use with near-hourly triggers, the SwannBuddy was still at 75%.

You can also secure the bracket to your door with screws. You will need a screwdriver regardless of the way you choose to mount the doorbell, though. An anti-tamper screw is inserted through the bottom of the bracket into the video doorbell itself.

Though the hardware for hardwiring the doorbell is included, there are no instructions demonstrating how to perform this particular task. Of course, a quick YouTube video could also solve that problem.

In addition to the SwannBuddy, you’ll find a chime in the box. This unit is powered by two AA batteries and pairs automatically to your doorbell. The moment someone rings the doorbell, the chime will play — quite loudly the first time, if you haven’t already adjusted the volume in settings.

Pairing your new SwannBuddy doorbell with the app is as simple as scanning the QR code and following the on-screen instructions. There’s nothing to it, especially if you’ve ever set up a smart device before.

When someone rings your doorbell and you aren’t home, you’ll check your phone to see who it is. Right? The main problem I had with the SwannBuddy is the load time. It takes as long as 15 seconds or more to load the camera within the app.

Nine times out of ten, I’m looking at the history on the app to see who came to the door. It doesn’t load fast enough for me to catch them while they’re still at the door, especially if it’s a delivery driver or someone in a hurry. The SwannBuddy only notifies you if motion is detected. It doesn’t actually alert you to someone ringing the doorbell unless you have already configured that setting, but it seems like it should be enabled by default.

Even with minimal light, the camera is powerful enough to make out finer details.

These two issues baffled me during my use of the doorbell, but they both feel like they could easily be fixed through software updates. A couple of patches could all but eliminate my main complaints about this device. Outside of these problems, the rest of the Swann app is intuitive. There are three modes to choose from: Home, Night, and Away. You can configure the modes to have different levels of motion detection, as well as whether you want to receive push notifications or not.

The Activity tab shows an overview of all the alerts throughout the day, broken down into two categories: Motion and System. Motion alerts occur anytime something passes in front of the doorbell, but system alerts only crop up when you change the Mode. As far as I could tell, the SwannBuddy doesn’t utilize geofencing, so there is no automatic mode shifts when you leave home.

The Live View tab lets you check on any Swann camera you have enabled, whether it’s a security camera or just the doorbell. It’s an easy way to see all of your video feeds in one place, but again — it can take several seconds for the video to load.

From within the Device Settings menu, you can select your doorbell and change its settings, but this is another area where I found performance to be less than optimum. Each time I loaded the SwannBuddy, a warning would say “Some of the device information is out of date.” This would disappear after a few seconds, but during this period, I couldn’t access any of the settings. All I could do was wait for the app to finish loading.

From within this menu, you can change the name of the device, its time zone, what Wi-Fi network it’s connected to, and view the Wi-Fi strength and the battery level. You can also adjust things like the camera date format, whether it uses color night vision or not, and the speaker and microphone volume.

The Swann app gives you access to most of the important things you need, but I found myself wishing there were more options — like the ability to change the chime, for example. Right now, it plays a Christmas jingle that goes on for twenty seconds. I would love to change it to a simple doorbell sound from within the app. Instead, changing the tune requires pressing a physical button on the chime unit itself. Yes, there are six options to choose from, but most just feel superfluous.

One area where the SwannBuddy does excel is in motion detection. The doorbell uses True Detect technology and can pick up motion and heat for more reliable alerts. It can also distinguish between people and animals.

Two-way talk lets you speak to visitors or leave instructions for delivery drivers (assuming the app loads fast enough to chat with them), while a 180-degree viewing angle means you can see your door as well as what’s on the ground in front of it. At this time of year, this means you can keep an eye on any packages delivered to your home.

The SwannBuddy includes a 32GB SD card that allows you to store footage locally on the device. Clips are also saved to the cloud for easy access. The SwannBuddy also integrates with Google Assistant and Alexa. You can display the feed on either of these devices by asking the smart assistant to show you the screen.

If your porch light is off at night, the SwannBuddy can see up to 16 feet away with infrared vision. Even with minimal light, the camera is powerful enough to make out finer details about anyone that pays a visit to your door.

Finally, the SwannBuddy has an IP56 rating. It can withstand almost all weather conditions. There’s no need to worry that direct sunlight or a rainstorm will damage the device.

The SwannBuddy Video Doorbell is a great device marred by a few minor, but supremely annoying issues. At $150, it’s inexpensive enough that I can easily overlook these problems in favor of all it does right. The doorbell’s potential could easily be met with a few software patches. If I had an entire setup of Swann cameras already, then adding the SwannBuddy to the repertoire would be a no-brainer.

All in all, it’s not a bad doorbell, but it’s not the best I’ve ever seen, either. Its ability to run on either batteries or through hardwiring, and its impressive specs save it from being just another video doorbell in the smart home blitzkrieg.

If you’re looking for top-of-the-line, it’s hard to go wrong with the Ring Video Doorbell Pro 2. It’s an expensive piece of hardware (priced at $250), but it comes with access to all of Ring’s impressive technology, like the birds-eye view and the automatic, Alexa-powered responses.

At the other end of the spectrum, the Blink Video Doorbell is only $35, but sacrifices features in the name of savings. It still streams and records in 1080p, but connecting to the device is a bit less streamlined and requires the Sync Module 2 or a membership with the Blink Subscription Plan.

The SwannBuddy Video Doorbell is made of pretty sturdy stuff. It feels nice and heavy in the hand, and is bulky enough to give the impression of quality. With proper care, it should last you for years. If something happens, Swann provides a one-year warranty from the date of purchase.

Yes. Despite its problems, the SwannBuddy Video Doorbell performs well. I hope that Swann will release updates that will correct the problems I had with it.