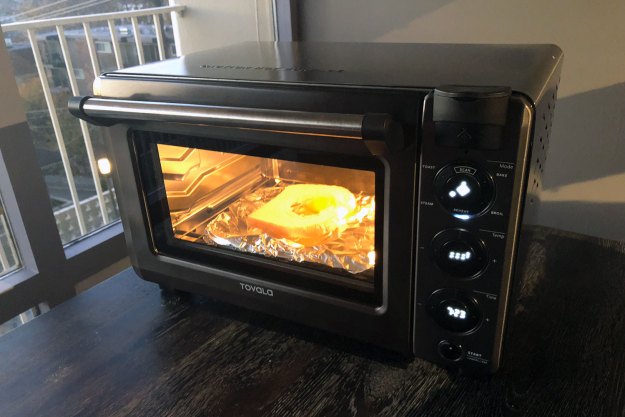 Steam ovens are pretty amazing, but most people don’t know how to use them. Maybe that’s why the Tovala Steam Oven doesn’t make a big deal of that feature. Sure, it’s in the name, but the steam takes a backseat to its big selling point: the no-prep meal kits designed specifically for the oven.

The second-generation Tovala ($349) makes some improvements over its predecessor, but some things — like the price of its meals — haven’t changed. After spending a few days with this elegant easy-bake oven, we’re still not sure who it’s for.

Not your momma’s toaster oven

You’ll probably need to move your microwave off your counter to fit your Tovala, as it’s 18.5 by 15 by 12 inches — roughly the same size. There’s some assembly required, meaning that you must place a metal piece over the steamer, insert a crumb tray, and put in the rack. The tray makes cleanup easier than the first-generation appliance, which had an exposed heating element.

The control panel is also an upgrade. Before, users needed the app to set specific temperatures and use the broil settings. That is obnoxious, because some people have husbands who refuse to download the app of any kitchen gadget they are testing. (“You shouldn’t need an app to microwave food” may or may not be a direct quote.)

This time, Tovala got it right, letting you choose between bake, broil, steam, and toast, set the temperature in 25-degree Fahrenheit increments, and select the time in one-minute intervals right on the appliance itself. There’s also a built-in scanner for its meal kits. Press the button, hold the package’s QR code under the red light, and the Tovala will set itself to follow all the instructions. Go ahead. Leave your phone across the room! Actually, the chime letting you know it’s done cooking is pretty quiet, so you still might have to rely on the app notification.

Why teach someone to prepare fish when you call sell them a piece of salmon ready to pop in the oven for $12 a pop?

The Tovala comes with a mini baking sheet, which you’re supposed to use for practically everything that isn’t a meal kit. The interior of the oven is by no means cavernous, though you can fit two meal kits at a time.

You could conceivably use the Tovala as a countertop steam oven sans the Wi-Fi connection, as the app does give some guidance for how to cook with it. Some, anyway. There’s no search function on the recipe portion of the app, because you don’t need it. There are only 54 recipes on the app, and 15 are for chicken. In addition, you can create your own multi-step recipes, having the oven switch from bake to broil to get a crispier finish on your meat, for example. There’s also a place to set the cook time and temperature, though you’ll still need to physically push start on the oven.

More than a microwave meal

As far as we can tell, the reason the Tovala only has 54 recipes on its app is that it doesn’t really want to teach you to cook. Why teach someone to prepare fish when you call sell them a piece of salmon ready to pop in the oven for $12 a pop? Tovala will send users between three and 12 oven-ready meals a week, each for $12. Unlike Blue Apron, you don’t get a discount for buying in bulk. The difference is that Tovala takes virtually no prep, but it’s still around $12 per meal. Depending on where you live, you could probably get an order of pad see ew for the same price and have more leftovers than your Tovala meal.

Though the oven has dropped in price by about $50 since generation one, it’s still clearly not trying to save users money. Its packaging clearly lists the fat, carbs, and calories in each meal, which is probably more than you can say for your local Thai restaurant. These meals seem to be meant for busy individuals who don’t typically cook and may want some more insight into exactly what they’re eating. The main draw is that not only are these meals easy to prepare, they taste really good.

The built-in scanner means you don’t have to pull out your phone to cook a meal.

Each prepackaged meal comes with a few containers of ingredients. Prep time is essentially zero. You just open the containers, perhaps drizzle a sauce on the meat or veggies, put the aluminum container in the oven, scan the code, and press start. Then you can walk way for roughly 20 minutes while the Tovala bakes and steams, creating juicy chicken and tender salmon. When people wring their hands about future generations not learning to cook because robots will do it for them, this is what they’re worried about.

And we have no doubt that some people with enough money to spend will see the appeal. They probably use Postmates several times a week, anyway. Some of the company’s customers are busy professionals, some are empty nesters, Tovala CEO David Rabie told Digital Trends.

“The thing they have in common that they told us is that cooking dinner during the week is a burden,” he said, and they were relying on takeout several times a week.

Steamed hams, but it’s not in the app

For a $349 countertop oven, it does many things very well. Our chicken didn’t dry out, our asparagus stayed crisp, and cheese got bubbly and brown. As with any new appliance, there was some trial and error. When we made a batch of cookies (we could only fit six on the included sheet), the recommended time on the package was 14 to 18 minutes. They weren’t quite done at 14 minutes and got a little too brown at 16.

Which brings us back to the 54 recipes in the app. There were even fewer when generation one launched, said Rabie, and now the company is releasing five new ones every couple of weeks. Most people are relying on the presets and meal kits, he said, but perhaps that’s because of the dearth of guidance in the app. There are just two baking recipes at the moment, so there’s not a lot of explanation for anyone unfamiliar with convection — just a mention that it’s faster.

When people wring their hands about future generations not learning to cook because robots will do it for them, this is what they’re worried about.

As we mentioned earlier, steam ovens are unfamiliar for most people. We would have loved to see Tovala take time to flesh out some explanations of how to apply the feature to familiar recipes. When you click on the upper-right hand corner of a recipe in the app, it lets you duplicate it, showing the different modes it goes through. It’s a bit clunky and doesn’t seem aimed at offering genuine instruction. If you want to figure out how to perfectly crisp bacon in your Tovala, you’ll have to practice trial and error or wait until the app gets more recipes.

Some users may never want to take the training wheels off and will stick to the rivers and lakes – that is, the prepped meals and app recipes – they’re used to. But for those who want to get adventurous with their steam oven, the lack of guidance and trickle of new recipes may prove frustrating.

The Tovala Steam Oven has a one-year, limited warranty, but you can try it for 180 days and get a refund if it you decide to return it.

The Tovala seems perfect for a lot tech bros we know. They’re single, don’t really know how cook, and try to eat reasonably healthy. Oh, and they make a lot of money. Hopefully Tovala beefs up the app (like maybe with a few beef recipes?), so there’s more of a balance between quick weekday meals and the opportunity to get creative on the weekends.

The Tovala is pretty unique. The $300 Cuisinart Combo Steam and Convection Oven lacks its smarts, while the $599 June Oven doesn’t steam. However, June recently paired with Whole Foods, so the grocery chain’s semi-prepped foods, like lemon-thyme-rubbed salmon, have preprogrammed settings on the oven. It doesn’t deliver ready-to-cook meal kits like Tovala – yet.

One nice thing about the Tovala is that it’s interface means even if the company goes under, you can still use it like a regular countertop oven. Sure, you won’t have access to the tasty $12 meals anymore, but at least you can still toast bread and steam broccoli. On the other hand, the fact that it’s Wi-Fi connected means Tovala can keep pushing new recipes to the app for you to test out.

If you absolutely hate to cook but don’t want to eat takeout every day and can afford $12 a meal, go for it. If you’re just looking for a countertop steam oven, you might want to work at the slightly cheaper Cuisinart.