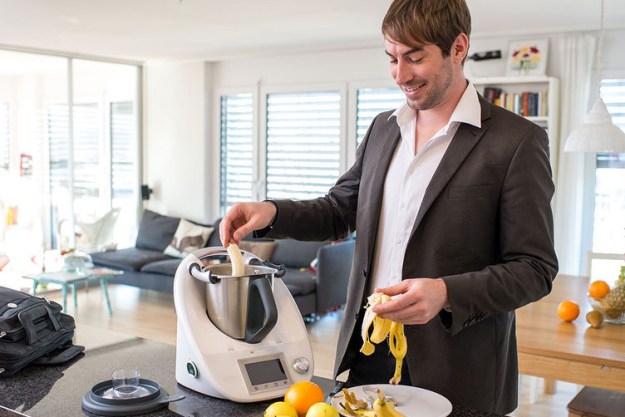 “If you’re going to surrender your counter space to a kitchen gadget, it might as well be one that does it all.”

For Thanksgiving, I made mashed potatoes, lemonade, cheesecake, whipped cream, and asparagus — all in one machine.

The Thermomix is a coveted gadget that’s been around for decades in Europe and Australia, but stopped being available in the U.S. in 2004. Now it’s back stateside, ready to whip, dice, and mix, along with about 10 other functions. Like a creature in a sci-fi movie, it sucks the life out of your other countertop appliances: Why pull out the coffee grinder, when I can use the Thermomix? Who needs a blender when I have my Thermomix?

You won’t find the $1,299 machine in a store; instead, you need to go to the website and set up a demo. Warning: Once you let the Thermomix in, you may not want it to leave.

Anyone who’s bought a KitchenAid stand mixer knows there’s no end to the attachments you can buy: A dough hook, ice cream bowl, and vegetable peeler are just the start. Vorwerk’s Thermomix takes a different approach: Everything you need to perform its 12 functions (weighing, timing, sautéing, melting, steaming, stirring, emulsifying, whipping, chopping, blending, grinding, and kneading) comes in the box.

The Thermomix might do more than your average blender — and at 13.4 by 12.8 by 12.8 inches and 17.5 pounds, it’s bigger than one too. Its white base has a scale included, as well as a touchscreen and knob. On the side is a slot for a recipe chip. There’s also an internal heating element. A stainless steel jug (or mixing bowl) fits inside the base. It holds about 74 ounces of food and has four blades — two of which nearly scrape the bottom of the bowl, while the other two jut upwards. One side of each blade is sharp, for chopping, while the other is dull, for mixing. A plastic lid with a “measuring cup” that fits into its hole sits on top and self-locks before the blades start whirring.

There are a few more accessories in addition to the base and bowl: A three-part plastic “varoma” is a tub that sits on top of the lid for steaming vegetables. There’s also a simmering basket that fits inside the bowl, for food you don’t want to come in contact with the blades. The butterfly whisk works for whipping cream, and a spatula helps scrape food off the bowl’s sides.

In addition to the big, round button next to the screen, there are four buttons along the bottom of it: One takes you back to the main screen, one brings up the scale, one activates the turbo or dough modes, and one reverses the blades to the “mixing” function.

Learning to cook the Thermomix way

Multicookers always come with a bit of a learning curve. Often, you’ll get a book with a few recipes, and once you have those mastered, you can extrapolate from there when it’s time to try unincluded dishes. The Thermomix has its own language when it comes to recipes, but it also has a few things going for it when it comes to teaching you to speak it.

For one, the screen makes it really easy to follow the included recipes. There are more than 150 recipes on the chip, from ketchup to béchamel sauce to gazpacho to lasagna to mashed potatoes to lemon meringue pie to chocolate ice cream. When you turn on the machine by pressing in the big dial button, you’re taken to a screen with three circles: The one on the left is for time, the middle is for temperature, and the one on the right is for speed. If you don’t want to follow a recipe — if you just want to dice an onion, for example — you can use the dial to set these parameters. To melt butter, you drop the butter in, and set the time for three minutes, the temperature to 212 degrees Fahrenheit, and the speed at 1. Once you set the lid on, it locks into place, and the blades start turning, the heating element clicks on, and the time starts counting down.

To follow a recipe, you click on the menu button on the touchscreen, and go to cookbook. You can find what you want by alphabetized list or by category. Once you click on the chocolate chip cookie recipe, you’re taken to a list of ingredients. Hit the “next” button on the screen, and you’ll be taken through each step. Preheat the oven, line the cookie sheets — it’s all in there. When you’re told to add 5 ounces of chocolate, a little mixing bowl icon shows up, with 0.0 ounces next to it. As you add in the chunks, you’ll see exactly how many ounces you’re adding. Unfortunately, it’s not smart enough to adjust the recipe if you add 6 ounces instead of 5. Once you’ve finished that step, you hit the next button and it will tell you to put the lid on, then it will tell you the exact time and speed (three seconds and 6) it will take to chop the chocolate. It goes on from there.

The follow-along steps make it pretty difficult to screw up the included recipes, but they’re also pretty customizable. If you want to skip a step, you simply hit next, and it won’t make a dinging sound at you or anything. When I compared Thermomix’s scale to a couple other kitchen scales, it held its own — though not when I accidentally had it resting on its own cord. It won’t measure down to the teaspoon or tablespoon, so you’ll still need to hang onto those utensils.

Everything you need to perform its 12 functions comes in the box.

Thermomix is extremely popular in many countries around the world, which also works to newbies’ advantage. I wasn’t satisfied with the whipped cream recipe in the Thermomix chip library (it told me to put it on speed 3 and avoid over-whipping with no time suggestion), but I found one online immediately, and it worked out perfectly. Between the hundreds of online recipes, the chip, and the charts for steaming and chopping guides included in the accompanying cookbook, you should be able to figure out what your machine can — and can’t — do. It makes Miracle Whip but not miracles. You can make a soup or pizza dough, but the Thermomix is not going to sear your steak or bake a crust.

The mixing bowl is dishwasher safe, but I mostly found myself using the old blender method of washing — putting a couple inches of water in it and letting it self-clean on speed 10 for a few seconds.

Thermomix had some issues with its TM31 model; several customers got badly burned due to a problem with the machine’s sealing ring. A company rep assured me this model was never sold in the U.S., but it did make me pay extra attention to the safety measures. The machine won’t start the blades spinning if the lid isn’t on, but it will still operate without the measuring cup in the hole. That’s by design, as some of the heated recipes need a place to vent the steam; sometimes the recipe will instruct you to put the simmering basket on top of the lid to prevent hot liquid from splashing out.

From the strawberry sorbet to the mojito to the risotto, everything I made in the Thermomix was easy and delicious. I never want to dice an onion with a knife again.

There aren’t a ton of machines that can do all the things Thermomix can, at least in the U.S. The Kenwood Cooking Machine ($1,000) is similar, as it actually heats food, unlike many of the other “kitchen machines” that are more like a mixer with more attachments. There are multicookers, like the $400 model from KitchenAid, that can handle many of the tasks at a fraction of the price, but you don’t get the same step-by-step instruction.

When something costs as much as a Thermomix, you definitely want it to last. Though it does come with a lot of recipes, it doesn’t have Wi-Fi. That might not be a big deal for now, but with things like the Drop kitchen scale integrating with appliances, it could make it a little less cutting edge down the road.

If you have zero other kitchen gadgets and not a lot of counter space, the Thermomix might just be the go-to appliance, starting with your morning smoothie and ending with your nighttime cup of cocoa.