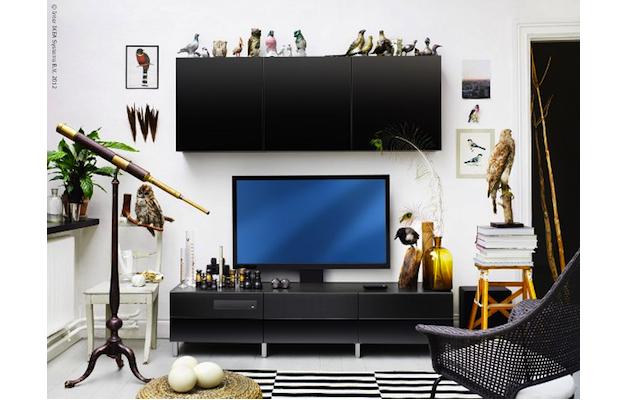 New information has emerged concerning Ikea’s forthcoming Uppleva home entertainment system, which was publicly announced during April, but with only the minimum of detail.

It’s the Swedish brand’s attempt to integrate its love of minimalist design and a high degree of customization into the ultra-competitive world of consumer electronics, and it’s a very brave move indeed. Especially if the price they’ve given relates to the model with the smallest screen.

We already know the Uppleva is a smart TV that comes with a Blu-ray player, a 2.1 audio system and a clever stand to organize and hide away all the cables, but Gigaom.com has managed to unearth some more information regarding the “smart” aspect of the television.

Like other connected TVs, the Uppleva will come with a variety of apps installed, totaling around 20 in this case. Not surprisingly, apps for the big names in online video will be standard, so expect native YouTube, Vimeo and Dailymotion support.

As the Uppleva will initially be released in parts of Europe, the only radio apps mentioned are QTom and TuneIn, plus there will be local versions of TV catch-up apps and video-on-demand services, but as they’ll primarily be specific to the country in which the Uppleva will be sold, no names have been mentioned.

The browser will likely be Opera TV, which includes a customized, TV-friendly interface and the ability to sync all your bookmarks and passwords across from the desktop version.

The screen is going to be manufactured by China’s TCL Corporation, which produces products for RCA in America and Alcatel in Europe, and will be available in several different sizes, starting at 24-inches and moving up to 46-inches. According to GDGT.com, a unusual 36-inch model and a more regular 40-inch model will join them.

Going by this information, it looks like the $960 start price could be for the 24-inch model.

While this price has been obtained by converting over the starting cost in Swedish Krona, it’s probably not going to be all that different in dollars, and you’re going to have to really love the design, the 2.1 speaker system and the media player to pay that for a 24-inch screen; especially when you can pop down to Best Buy and pick up the latest 40-inch Samsung 3D smart TV for $999.

But then, the Uppleva probably isn’t going to attract those who want the highest spec TV or the biggest screen, and instead will appeal to those who dislike being forced to integrate a TV that doesn’t fit with the decor into their homes.

The Uppleva’s staggered release schedule begins next month, when the Uppleva will start appearing in Europe, before arriving in the USA sometime next year.

Why you need this alarm clock with Google Assistant — now $30

Best Google Home and Google Nest deals for May 2022