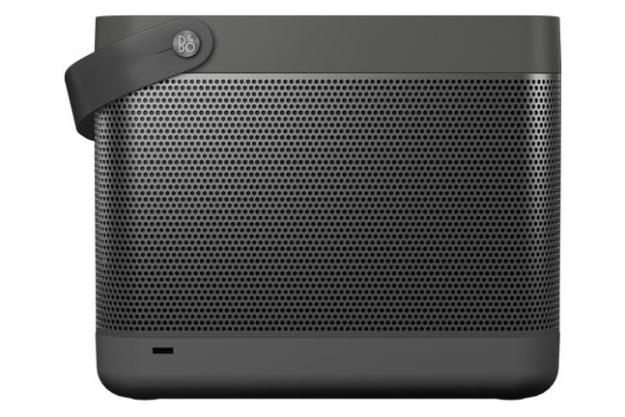 “The Beolit 12’s portability is convenient, and its sound quality well above average for a speaker of its size. However, justifying an $800 price tag is a huge stretch for us.”

Editor’s Note: We make mention in our video review that the Beolit 12 had to be manually reconnected to our Wi-Fi network each time it was powered up. B&O has since informed us this will be changed with a firmware update that will be available by the time the unit is available in the US.

Most folks have, at some time or another, run into a Bang & Olufsen (B&O) product. The company’s recognizable take on electronics design has produced some unique-looking and historically upscale products, which have enjoyed a glut of product placement love from the TV and movie industry. The Beocom 2, for instance, appeared in Sex in the City. The BS9000 is practically a staple for any recent production involving Hugh Grant. We’re pretty sure there was a B&O product somewhere in The Devil Wears Prada, and remember the TV hit series Friends? B&O was all up in that, too.

That being the case, it’s easy to understand why B&O gets pegged as a “lifestyle” brand and is often lumped in with other such companies (we won’t mentioned any names) that often prioritize style over performance. You know, the kind that produce electronics regarded as “elitist” by the US public, and ridiculed by high-end audio enthusiasts.

Such a broad characterization is rarely fair — even the other “lifestyle” company we elude to has turned out some genuinely decent-sounding products from time to time. And, in the case of B&O, it is probably especially so. Some of B&O’s past products may have been unnecessarily expensive, but they actually sounded (and looked) quite good.

With that attitude in mind, we approached B&O for a review sample of its newly unveiled Beolit 12 AirPlay speaker. B&O got one to us very quickly and we got into evaluating it straight away. In our B&O Beolit 12 portable AirPlay speaker review, we discuss its good and not-so-good design points, evaluate its sonic performance, and rank it against the likes of the B&W Zeppelin Air and Klipsch G-17 Air.

The Beolit 12 is smartly packaged without any unnecessary fluff. The bright red box it sits in is outfitted with a carrying strap, echoing the strapped design of the Beolit 12 itself.

The factor that most distinguishes the Beolit 12 from other premium AirPlay speakers such as the B&W Zeppelin Air or Klipsch G-17 Air is its portability. Inside the Beolit 12 is a rechargeable battery which B&O claims can power the unit for up to eight hours with a wired connection or up to four hours via AirPlay. It charges iOS devices, too.

To enhance its portability, a leather carrying strap affixes to opposite ends of the speaker cabinet with round lugs. It hugs the left side of the speaker when lowered to minimize its appearance and help the speaker keep a clean look.

The top of the speaker is recessed and lined with a rubbery anti-skid material. This provides a sort of “tray” for phones or other small portable media devices. B&O also uses it to hide the unit’s four touch capacitive buttons for power, toggling wireless, and turning the volume up and down. The bottom of the speaker has four round rubber pads for stability.

The back of the speaker bears a pop-out door that hides the speaker’s AC power port and Ethernet port. A small cutout in the door allows cables to be passed through. The right side of the speaker has a small recess at the bottom, where we find the speaker’s USB port and ⅛-inch mini-jack for direct connection of an iOS device (or any other audio device, really).

The front of the speaker is comprised primarily of an aluminum grill. The only B&O logo we found is on the lugs that attach the leather strap to the speaker. Otherwise, the front face of the unit is exceptionally clean. In fact, the speaker is kind of reminiscent of an oversized lunchbox or a small picnic basket. To be sure, it looks like anything but a portable speaker, which we think could resonate with all sorts who want an audio solution that blends in to its surrounding decor. With that said, the opinion of those in our office varied greatly. Some liked the Beolit 12’s appearance while others were not huge fans.

Under the clean-looking facade hides a 120-watt digital amplifier, which powers a single 4-inch mid-bass driver and two 2-inch tweeters. This may not sound like a lot speakers, but the tweeters in use are larger than most and could potentially be designed to efficiently cover much of the upper midrange frequencies. That leaves the 4-inch driver to cover the mid-bass and bass frequencies without the added hassle of tackling the whole midrange band on its own.

At this point, we have no major gripes to report on, save, perhaps, the absence of a remote control. This may seem ironic, considering we’ve commented in the past that such a thing seems redundant with an AirPlay speaker, since the iOS device itself functions as the remote. However, having toted the Beolit 12 around outside of our home and office (and away from a Wi-Fi network) with our iPhone hardwired to the speaker, we have to say a small remote would have come in pretty handy.

As is the case with any AirPlay speaker, the Beolit 12 must be connected to a Wi-Fi network before the wireless music streaming party can commence. This is the only technically involved process, per se, but it can throw you a curve ball if you’re not paying attention to the provided instructions.

Some boomboxes do it by having the speaker act as a Wi-Fi access point, which is then reprogrammed with a Mac, PC or iOS app. B&O opted for the hardwire approach instead, which requires an Ethernet cable connection between the speaker and a Mac or PC computer’s Ethernet port.

B&O’s printed instructions are just fine, but for those wanting a live setup tutorial, the company provides a video on its website. For the most part, the setup process went along as described in the instructions and was pretty brief. However, on our first connection attempt at home, the Beolit 12 positively indicated it was connected to our Wi-Fi network, yet it wasn’t identified by iTunes. After a second attempt to connect, iTunes recognized the presence of the Beolit 12 and we were able to stream music right away… from our PC, anyway.

Like the Klipsch G-17 Air, the Beolit 12 is the unfortunate victim of some sort of compatibility problem that exists between the iPhone 4S and AirPlay hardware. It’s a problem that Apple has promised to fix with its iOS update, due out “sometime in the near future.” So we never got to stream music via AirPlay with our iPhone 4S and neither will you, should you decide to purchase the Beolit 12 prior to Apple’s iOS update release.

B&O does point out a workaround that involves using the iPhone 4S as a remote control for a PC or Mac’s iTunes library. Yes, that’s a convenient feature, but it presumes that the user’s iTunes library will always be available, and doesn’t take into account all the other content that sits waiting on the iPhone.

Nope, we want to be able to stream directly from our device so that we can listen to Pandora, Spotify or YouTube audio on demand through the speaker, but for the time being, that just isn’t possible. Users of the iPhone 3GS, iPhone 4 or either iPad model should have no issues. Guess we’ll just have to wait for the iOS update like everyone else. Thanks a bunch, Apple.

The Beolit 12 sounds very good; better than we expected, actually. The compact shape doesn’t allow for any stereo separation, so in-room response is pretty localized, but the sound quality is much better than many of the much larger iPod speaker docks we’ve tested.

While the bass response of the Beolit 12 can’t reach down as deep as the Klipsch G-17 Air, it still provides plenty of punctual low end. We appreciate that the speaker doesn’t exhibit bloated, boomy or forced bass. Instead, it rounds out the sonic picture very well and adds a distinctive punch while deftly avoiding the “one-note bass” pitfall common to many other small speaker docks that aim to eke out as much bass presence as possible. We particularly liked how smoothly the speaker transitioned between bass, midbass and midrange tones. The Beolit 12 won’t have your friends looking around for a subwoofer, but the bass-to-size ratio and accuracy is still extremely impressive.

The Beolit 12’s handling of high frequencies was probably our favorite part of the unit’s sound signature. Treble through this speaker was clean, articulate, just a bit airy, and detailed enough to be satisfying. It was not thin, metallic, overextended or artificially bright. Even our coarsely bright recordings sounded really good through this speaker.

Midrange response was very good as well. We felt like there was a little more body and presence to vocals than we experienced with the Klipsch G-17 Air. We also got a bit more crunch to distorted guitar effects and better tone out of the drums, too.

The Beolit 12’s off-axis response isn’t quite as good as the Zeppelin Air or G-17 Air. When you move off to the side or stand above the unit, the treble and upper mids take a bit of a hit. Still, the speaker is capable of some pretty healthy volumes, and does a good job of filling medium-large (say, up to 20 x 20 foot) spaces. And, of course, it works just fine outside as well, where it will likely add a nice musical backdrop to outdoor work.

If we don’t already know how much an item costs before we review it, we avoid finding out until our review is complete. The idea here is that we form an opinion and rating based on how the item functions without regard for the price. Based on this methodology, we were prepared to give the Beolit 12 an 8.5. Then we learned what the intended retail price would be: $799?!

Look, we understand that some people will pay unnecessarily bloated price premiums for something special, and we submit that the Beolit 12’s portability is convenient, and its sound quality well above average for a speaker of its size. However, justifying an $800 price tag is a huge stretch for us.

For that, we could pick up a pair of Paradigm Shift A2, Paradigm’s Bluetooth dongle, and an Apple Airport express and still have enough scratch left over to load our iTunes library up with over 150 songs worth of new music. Sure, the resulting system wouldn’t be portable, but the sound quality would absolutely blow the Beolit 12’s right out of the water. So, the question is: Is the portability worth it to you?

In a time when price-to-performance ratios are moving ever toward the benefit of the consumer, it seems counter-intuitive to produce a product that runs the opposite direction. Unless, of course, the intent here is to maintain that elitist reputation and alienate a large segment of potential buyers.

We scored the Beolit 12 an 8 for excellent performance and portability, but can’t issue our recommended product badge when so many other good sounding portable music options exist for iOS device owners at far lower price points.