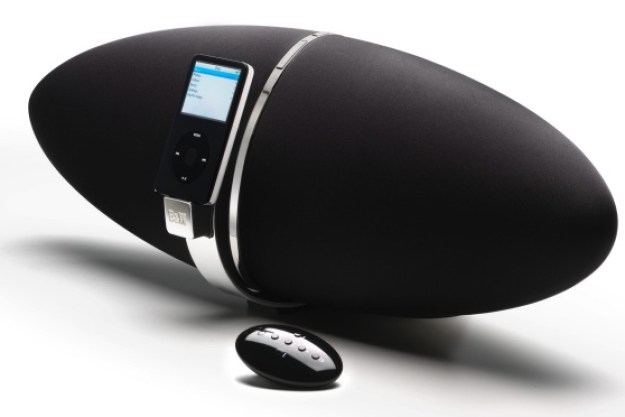 “If you're going to listen to an iPod at home, this is the way to do it.”

The Zeppelin airship was to be a supreme affirmation of German superiority… and we all know how well that turned out. However, British speaker company Bowers & Wilkins has high hopes for its own 21st cen-tury Zeppelin – the difference being that this product relies on its shape, not to be airworthy, but rather “audio-worthy” instead. Granted, it isn’t an easy thing to do with digital music recorded in MP3 format, and especially for those who’ve gotten used to enjoying an iPod’s low-quality recordings played through inex-pensive ear buds. So let’s see just what $599 USD gets you exactly, besides, of course, a stainless steel body with black trim and black cloth grilles…

There’s no denying that the Zeppelin’s shape draws attention, and the fact that it’s made of steel and has a heft of 16 lbs. shows that there’s some serious weight being thrown around inside. The back sports two bass ports, along with a dual audio input handling both analog and digital sources, and both S-Video and composite out options for video. There’s also a USB port designed for updates and the power plug.

A rubberized bottom pad that places the device at about a 40-degree angle dictates the way the Zeppelin stands. This is good for when the unit is located below ear level, such as on a desk or countertop. An ex-tra pad is further provided to make the Zeppelin face more straightforwardly – it has inserts to keep it in place.

On the front sits a docking bar that runs up the center, between the two sides, and holds the iPod in place through a clever bit of friction engineering that alleviates the need for different inserts. You simply press forward on the dock to move it out and then insert the connector and release so that the iPod lies against a backing plate. But because of the docking bar’s placement, it seems to shout out to be gripped when you want to pick the Zeppelin up. However this should never be done as it could easily damage the dock. (I had to pull my hand back from doing this on more than one occasion) – the proper way to grip the unit is by holding both sides.)

The dock works with all Nanos, the iPhone and iPod Touch, the iPod with color display, iPod with video and the Mini and iPod Classic. There’s full functionality with 5G iPods as well, but it’s limited with the 3G/4G models (and Mini). For example, the Zep doesn’t charge 3G iPods while they’re in use and the same happened when I tried attaching my first generation Nano.

Controls ride along at the top of the dock’s strip and are incredibly unobtrusive, consisting of a +/- volume bar and a power button that also chooses sources (connecting an iPod chooses it automatically).

We get the idea of continuing the design theme, which is why the remote is black and steel-backed. But honestly, we can’t really say anything good about the egg-like shape. Besides tiny buttons and even tinier text, you can’t quickly tell which end is up, and it’s not comfortable to hold for a long time. The remote doesn’t let you control every aspect of the iPod either. It lets you play/pause and “move” through songs, but you can’t select playlists or artists from it and so have to do the initial selection on the iPod itself. Nonetheless, the infrared beam works well despite the small area at the front of the remote where the emitter is located.

A look “under the hood” has to be mostly done via imagination, since we can’t really rip the Zeppelin apart for an intimate and invasive look and B&W deliberately makes it tough to remove the grills. But if we had X-ray vision, what we’d see would be left and right channel midrange cones and a tweeter at each end, plus a Bass driver in the middle and an infrared receiver and multi-color LED. B&W says that the system’s elliptical shape isn’t just to attract attention, but is specifically designed to greater focus the music by nar-rowing at the sides where the tweeters are found. These tweeters are the same Nautilus type that you’d find in B&W’s superlative 800 reference speaker range, by the way.

Turning the Zeppelin on for the first time sees it going through an internal check. The LED on the front changes color to indicate its “state” – for example, red for standby, blue for when an iPod is being used or green for when the auxiliary input is selected. (FYI – the input “knows” whether an analog or optical plug is attached and adjusts accordingly.) Putting in an iPod automatically selects it as the source. We’re using a 5G model and once attached, it easily started charging.

Video quality is nothing special – it’s as good as expected in that low-resolution videos exhibit artifacting and plenty of pixilation plus it can go pretty soft at times. However, playing a higher-resolution file causes video to look much better – the Zeppelin itself just being a conveyor of the video from the iPod to the screen.

Sonic-wise, it’s fair to say that a speaker is mightily influenced by the audio that it is being fed. An MP3 file isn’t going to compete on the same level as that of a fully-realized audio signal from a CD, but the real issue is how it sounds with ordinary tunes. Hence, during testing, our iPod played through a variety of songs both downloaded from the iTunes store along with those ripped by hand at a higher bit-rate. We listened to the Eagles and the Cars and Elvis Costello and even some Snoop Dogg from our collection, using a 5G iPod as well as a first generation Nano.

Sound coming from the Zeppelin is amazingly good and the stereo separation surprisingly so. Voices are clear and sweet and you even start hearing nuances that weren’t being picked up before. Music has a density belying its iPod-based sources and is not “thin” to the ear. Midtones are fluid and the bass is solid, deep and powerful. And that’s even at low volumes, which doesn’t happen often, because you’ll crave playing tracks as loud as the Zep’s got power to spare (there’s a 25 watt amp for each two-way mid/high-frequency section, and 50 watts for the sub). This experience is only amplified when you plug in a CD player for, say, some Mahler and Tchaikovsky, which only further reinforces just how expansive the soundfield is. To be blunt, our Bose SoundDock can now be tossed in the trash, because it sounds noth-ing as good as the Zep. It just goes to show what taking the high road with speakers – regardless of what sound source they’re going to be used with – can accomplish.

We’ve always had a lot of respect for B&W, as they don’t cut corners when it comes to building some really sweet speakers. The Zeppelin continues this tradition and adds a design that benefits sound quality even more than it does the eye. In short, no matter how many times you’ve parsed through those same tired old iPod tracks in your collection, it’s still bound to make you stop and take a good listen.

Apple AirPods Pro 2 vs. AirPods Pro: What’s new?
Amazon’s third-gen Fire TV Cube has great features the Apple TV is missing
Amazon adds spatial audio to the Echo Studio smart speaker
B&W’s flagship Px8 headphones cost way more than they were supposed to
The best superhero movies of all time
Marantz’s new Cinema series AV receivers are a stylish way to go 8K
The best superhero TV shows of all time
What’s new on HBO and HBO Max and what’s leaving in October
These giant TVs are all under $300 during this Walmart TV sale
Best Prime Day Deals: What to expect from the October event
Sennheiser Ambeo Soundbar Plus hit by unforeseen technical delay
The best TVs of 2022: our favorites from Samsung, LG, Sony, and more
Apple AirPods Pro 2 vs. Google Pixel Buds Pro