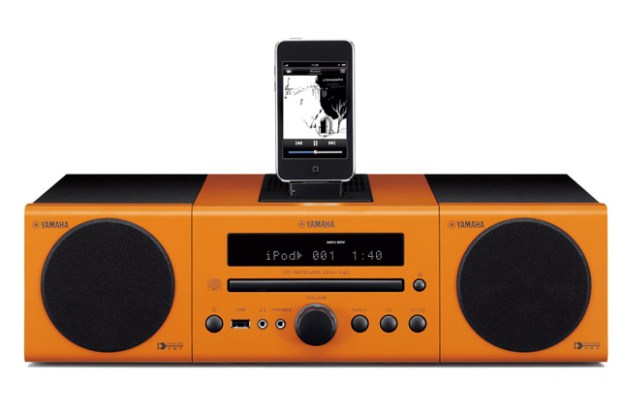 “Yamaha’s MCR-140 Micro Audio system goes above and beyond a typical iPod dock with a wireless transmitter that lets you take your iPod with you.”

Since the iPod speaker dock has gotten wildly popular, desktop component audio systems (A.K.A. micro systems or executive desktop audio systems) haven’t gotten a lot of attention. Perhaps their lack of popularity is due to the flooding of iPod speaker docks into the market and the resulting lack of display-shelf room; or maybe it’s because these oft expensive systems have frequently lacked the right combination of features, style and sound quality to appeal to consumers..

With the MCR-140, Yamaha aims to stand out from the crowd and steal a little spotlight for the likes of compact audio. By including a CD player, wireless iPod capability, USB input, 1/8” external jack and AM/FM tuner and into a low profile, custom iPod color schemed package, this unit boasts everything that many iPod speaker docks miss. Here, we test the MCR-140 to see if it earns its $400.00 sticker price.

Pulling the MCR-140 out of the box was a rather unceremonious affair. Because the component system is comprised of just three pieces and a couple of accessories, there isn’t a whole lot to go through; but that seems to be point. The MCR-140 is easy to set up and simple to use.

The MCR-140 is stylishly dressed to match your iPod’s color. The review sample we received was orange, but there are nine other colors to choose from, each matching the Apple’s color palette. The top and front face of the main unit is fitted with a colored panel as is the front face of the speaker’s cabinets. The CRX-140 (CD receiver) measures in at 4-3/4″ x 7-1/8″ x 12-1/8″. Each speaker measures 4-3/4″ x 4-5/8″ x 11-1/4″. Included with the component system is a wireless iPod transmitter, a thin, compact remote control and an FM antenna.

The main unit’s front face includes a CD tray, power button, three different input jacks, volume control, input button and a few others for CD playback. The LED display is dimmable for use in a bedroom but is otherwise bright enough for use in an already brightly lit room.

After connecting each speaker to the back of the CD receiver and plugging it in, the MCR-140 was ready to go. Simple.

Along with its color, the MCR-140’s streamlined design helps to give it a modern, unobtrusive look that should be a good fit for a wide variety of décor. By making the speaker cabinets as deep as the receiver and using a single, 4” driver, the speakers share the low height of the CD receiver but maintain enough internal volume to support good bass response. Each speaker is powered by a 15 watt per channel digital amplifier that, along with Yamaha’s YST servo technology, should produce big sound from the 4” speakers.

The MCR-140’s set-up menu can be accessed only by remote control and offers adjustments for bass, treble and balance. There are also sections for setting the clock, sleep timer and a power saving mode. Outside of setup, you can use the remote to advance through folders and tracks on your iPod, control the CD player, access AM/FM radio, save radio station pre-sets, turn on the sleep timer, adjust or mute the volume and power the unit on or off.

The included wireless transmitter is like a lounge chair for your iPod or iPhone. It cradles your iPod from the back and the underside so that it can be placed atop the MCR-140 for charging and non-wireless iPod playback. That’s a good thing for a couple of reasons: The transmitter eliminates the need for multiple adapter plates that match various iPods and, since the transmitter operates off your iPhone battery, you’ll need to be able to charge it without necessarily interrupting music playback. The downside: it’s bulky.

The MCR-140 can also accommodate another iPod, any other portable media player or a laptop computer through either the 1/8” connection or USB jack. It will also play back Windows Media Audio files or streaming digital audio via USB.

Before we did any serious listening to the MCR-140, we decided to take the wireless transmitter for a spin. Since the transmitter is a plug-and-play device, we didn’t have to do any pairing, as you do with most Bluetooth devices. After a few minutes of walking around we learned that as long as you’re in the same room as the receiver, the sound quality was on par with a wired connection. Since this wireless adapter doesn’t use Bluetooth technology, there is no compression of the signal so what you hear is essentially the same as or close a hard connection to the receiver. Unfortunately, once we strayed into another room or allowed any other bulky object to obstruct our line of sight with the MCR-140, we lost the signal entirely. So, while the wireless transmitter will allow you to take phone calls or adjust audio tracks and volume from the comfort of your couch, desk or bed, it will not let you carry on about the house with your phone on you. That’s of little consequence since the transmitter is a little too bulky for pocketing your device anyway.

We appreciate the fact that the MCR-140 powered itself on when we connected our iPhone to the wireless adapter and began to play music. Likewise, it powered off when we were done. Also, when we received a phone call, the MCR-140 paused the music, and restarted when the phone call was ended. Another nice touch is that the volume control on our iPhone actually adjusted the volume of the receiver and not just the output level of the iPhone. Unlike many wireless iPod adapters, the MCR-140 wireless unit sends out a digital audio signal (PCM) instead of an analog signal with varying volume levels. The result is sound that is always clean and never overdriven.

Once we were done playing around with the MCR-140’s wireless capability, we sat down to critique its sound quality. For our testing purposes, we used a selection of 5 different tracks with versions on CD, iPhone and a thumb drive in WMA format.

Generally speaking, we felt the MCR-140’s sonic performance was good, but not great. Bass response had more presence and impact than we anticipated but the upper end of the bass range was a little too prominent and gave some of our tracks a bloated sound. Midrange response was on par or better than most devices in this price range, but lacked a presence that we had hoped to hear from the 4” speakers. The only true disappointment was the high frequency response. Though we were happy to hear that the Yamaha didn’t have an overly aggressive or screeching quality to its treble, we did hear a lot of grit and some distortion. The effect was much more noticeable at close range than from a distance but we consider it an issue since many desktop systems end up, you know, on a desktop and at a close proximity to the listener.

Yamaha’s MCR-140 offers more features and connectivity than most iPod docks and an art-deco appearance that should appeal to a wide range of shoppers. Its sound quality, while not without its limitations, is good enough for most listeners to appreciate. Also, the wireless adapter is a nice thought and provides superior sound quality when compared to many other wireless options, but its bulkiness and limited range make it more of a novelty than a practical feature. If wireless playback isn’t all that important, we suggest considering the step-down model MCR-040, which is $100.00 less and offers all of the same features minus the wireless adapter.