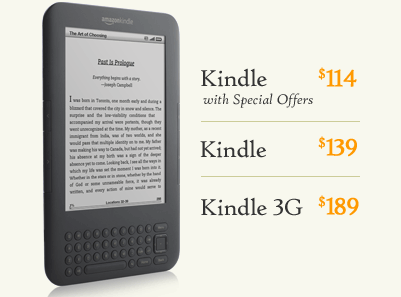 Amazon is now selling the Kindle for $114 – but there’s a catch. The discounted e-reader will come with advertisements included, which Amazon promises won’t interrupt your reading and will only show up on the home screen and screensavers. “We took our bestselling Kindle and made a version with special offers and sponsored screensavers. Companies sponsor the screensavers and you pay less for your Kindle.”

And to make the offer even more appealing, Amazon claims these ads will be things “customers want to see.” The online retailer created an app called AdMash which users can download and pick ads that interest them. Sweetening the deal further are discounts that will be sent directly to your Kindle from Amazon during the first few weeks of its promotion. Included deals are:

It’s a pretty sweet deal, and just one more way Amazon has found to discount the Kindle, this time also raking in some sponsorship money and coin from these screensaver sales for itself. The $139 Wi-Fi only Kindle was a great chance for consumers to get their hands on a best-selling product that had one caveat but otherwise saved them $50 and functioned just as well. Sure, Amazon profited off selling a less expensive Kindle, but it wasn’t two-fold. This time, the company is seeing ad money as well as new customers.

Of course, if you really, really hate ads, $25 to never see one on your Kindle is probably worth it. But with all the concessions Amazon is making to keep these promos from annoying users, it sounds like an easy way to save some cash.

Best Prime Day Smartwatch Deals 2022: What to expect in July