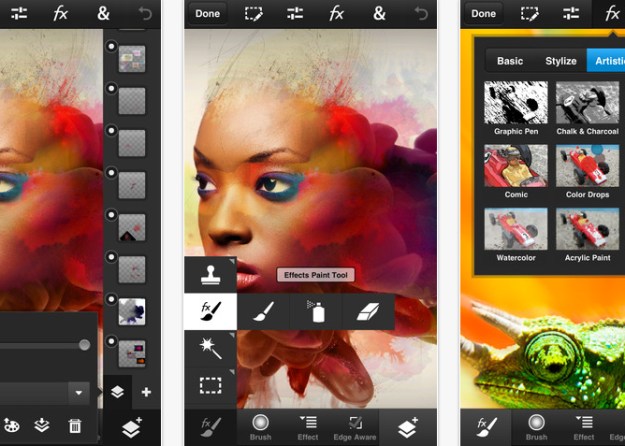 If the slew of smartphone photo-editing apps already on the market just don’t cut it when it comes to sprucing up your images, then Adobe’s Photoshop Touch for phone may be just the ticket.

Released Tuesday, Adobe’s powerful software comes with a reasonable $5 price tag and is available for the iPhone (4S and 5) and latest iPod Touch as well as any Android handset running 4.0 or later.

The software, which supports images of up to 12 megapixels in size, brings with it many of the features found on the tablet version, including layers, advanced selections tools, adjustments and filters. You can also add drop shadows, fades, strokes, graphical text….the list goes on. Features such as Scribble Selection for high-precision selections using your finger and Camera Fill for real-time creative blending are also included.

Its range of filters will also be familiar to tablet users of Photoshop Touch – Color Drops and Acrylic Paint are both included – while a new Ripple filter has also been added.

“With Photoshop Touch and the Adobe Creative Cloud, I can start a project on my phone, continue it on my tablet, and polish it off at my desk in Photoshop CS6,” Photoshop’s Stephen Nielson said in a blog post announcing the launch of the new app. “Photoshop Touch will automatically keep my projects in sync on each device, at the full resolution and with all the layers intact.”

Sign up to Adobe’s Creative Cloud to store and share your work and the company will give you 2GB of space for free.

It’s pretty remarkable that Adobe has managed to squeeze such a feature-rich version of its powerful image editing software onto the screen of a smartphone, but for some users it’s exactly that which may put them off shelling out for it. Do you think you might find it a bit too fiddly to perform the intricate edits the software offers on such a diminutive screen?

However, for urgent work in the field when you’re without a tablet or laptop, it could well become the go-to app for serious snappers.

Photoshop Touch for phone is available now from the iTunes store and Google Play.