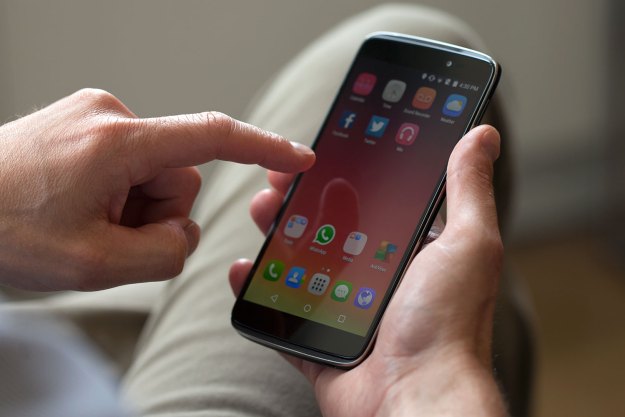 “Thoughtfully designed and punching well above its weight class, the OneTouch Idol 3 proves budget phones can be wonderful.”

In pursuit of emerging markets and feature-phone holdouts, companies like Motorola, Microsoft, Asus, and others have launched uncompromising hardware at increasingly attractive prices. The Asus Zenfone 2, for example, packs a 5.5-inch 1080p display and 2GB of RAM and starts at $200. The Microsoft Lumia 640 is even cheaper – $80 – but cuts surprisingly few corners.

Those are cream of the crop examples, granted. Despite the market’s maturation, some of today’s mid-range handset are spectacularly ill-conceived, or fail to live up to lofty expectations, or launch in so few markets as to quickly fall into obsolescence. But there are exceptions — phones subversive enough to match or best the standard-bearers in their category, phones that manage to stand out among a crowded field of competitors – with price points that belie their quality.

After using the Alcatel OneTouch Idol for two weeks, I can safely say it’s one of those.

If the name “Alcatel” doesn’t ring a bell, don’t worry — you’re in good company. The Idol 3 is the French phone first stateside, off-contract, direct-to-consumer phone. But you wouldn’t know it: The hardware holds its own.

Importantly, the Idol 3 feels good in the hand. It’s substantial for a plastic phone, but falls thankfully short of the heft in the competition’s metal and glass bodies. That’s not to say the construction’s perfect — its angular sides have a bad habit of digging into the palm — but whatever the Idol 3 lacks in ergonomics it more than makes up for in style. Its flat, non-removable rear panel features a pleasingly minimalist etched grey design, fashioned from a polymer that seems a cut above most plastics. It’s solid, unflexing, and reassuringly sturdy, a feeling that carries throughout. The faux metal band around the Idol 3 is rigid to the touch, and even the power and volume buttons, which are notorious sources of weakness on mid-range handsets, feel sturdy.

The Idol 3’s absolutely brimming with thoughtful little design touches. The edges are subtly curved and ever-so-slightly chamfered, and the display glass stops just short of the phone’s top and bottom to accommodate stereo speakers. The ports (a USB connection, stereo jack, and SIM slot) are unobtrusive, as is the rear camera, which is tucked away in the top-left corner, bordered by silver plastic. The overall effect is easiest explained in wristwatch terms: the Idol 3’s like the Seiko that most people take for a Rolex until told otherwise. It’s really that nice.

Behind the display glass is a sizeable (5.5-inch) IPS LCD panel with an impressively slim bezel. It’s 1080p and not the 1440p most higher-end handsets sport, but there’s a reason not all phone makers have moved to higher-resolution displays: It’s often tough to tell the difference, and that’s definitely the case here. The Idol 3’s has excellent viewing angles, is bright both indoors and in direct sunlight, and shows none of the washed-out colors or shimmer exhibited by displays on other phones in its category. It’s vivid – it won’t be mistaken for AMOLED, but colors pop. And it’s fully laminated, so the gap between the screen and glass is practically undiscernable, giving photos and text an almost paper-like appearance.

The dual, forward-facing JBL speakers are the other hardware highlight. They have surprisingly good dynamic range, and in terms of low and high frequency reproduction far surpass the stereo speakers in the Nexus 6 to which I compared them. (Bass-heavy tracks sound especially good.) They’re plenty audible, too: just about as loud, if not more so, than the BoomSound array in the HTC One M9.

It’s not all perfect, of course. Slightly less impressive is the Idol 3’s camera for one thing. The 13-megapixel Sony sensor and single flash resolves a good amount of detail in decent lighting, but the quality takes a dive in dim environments. And focusing is a bit slow (a good two or three seconds behind flagships like the Galaxy S6). But it’s not all bad – videos (up to 1080p) are mostly free of judder and noise, and the camera app offers a fair degree of control without overwhelming, including options for manual exposure, panaramic mode, HDR, and skin tone/texture correction.

Performance, like the camera, is in the “good, but not great” category too. The Qualcomm Snapdragon 615 processor and 2GB of RAM are no slouch in most cases, especially if you aren’t multitasking – basic tasks like checking e-mail, surfing the web, and scrolling through Google Now cards never felt like a chore. But open more than a few apps at a time and things start to bog down, especially when resource-heavy productivity apps and 3D games are left running in the background.

The battery’s a better performer. It’s 2,910mAh, and feels every bit of it – I never had to worry about running out of juice on the most demanding of workdays. During a lighter week, I even managed to stretch it a day and a half.

Android on the Idol 3 is an almost Nexus-like experience. This is Google’s mobile operating system in nearly its purest form, unblighted by the non-removable apps and restrictions in tow on nearly every third-party Android skin.

Performance, like the camera, is in the “good, but not great” category.

The few customizations present are restrained, but mostly welcome. By default, the lockscreen contains shortcuts to activities and utilities like a selfie mode, turn-by-turn directions, phone contacts, preset music playlists, and a barcode scanner. There’s the cleverly named “Eye-D,” a security feature which unlocks the phone by matching the unique blood vessel patterns in the whites of your eyes.  And you can wake and shut off the Idol 3 with a double-tap gesture, like LG’s G4, and mute incoming calls and alarms by flipping it face down.

Alcatel touts the Idol 3’s “reversability” as its most innovative feature, and it’s easy to see why: Orient the handset right side up or upside down and the interface automatically “flips” (with a nifty animation, I might add) to accommodate the orientation. Thanks to dual microphones on opposite ends, you can even take phone calls in “reverse mode,” though why you’d ever want to is beyond me.

The orientation feature felt more gimmicky than anything, but I found a few of Alcatel’s preloaded apps useful. A simple sound recorder lets you save voice memos, there’s a note-taking app for jotting down memos, and a radio UI lets you tune to FM stations within range. There are a few pre-installed third-party apps, but the ones most likely to annoy – productivity suite WPS Office, selfie editor Facetune, and social media apps like Twitter and Facebook – are uninstallable.

The knee-jerk reaction to phones beneath the $300 mark is to expect the worst; trade-offs are basically understood as inevitable. That’s true to some extent for the Idol 3, yet Alcatel’s handset bucks more than a few budget phone strictures. It’s plastic, but quite durable. It sports a beautiful display and excellent speakers. And it runs a vanilla version of Android with features that only augment, not change or restrict, the software experience. The Idol 3’s a package, all in all, that you’d expect several price brackets above its MSRP.

The Idol 3 isn’t perfect. The camera could be better. It occasionally stutters. But factor in the unsubsidized cost — $250 — and those nitpicks become a lot more digestible.