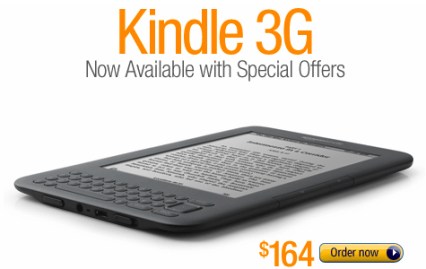 With news being public for a while now that Barnes & Noble was going to be releasing a new e-reader, Amazon will have had ample time to prepare its response. And here it is: an ad-supported Kindle 3G.

In a press release issued on Tuesday, just hours after Barnes & Noble unveiled its new Nook Simple Touch e-reader, Amazon announced the release of the Kindle 3G With Special Offers, coming in at $164, which is $25 less than the cost of the regular Kindle 3G.

Amazon’s Jay Marine said of the new product: “You will get all the features readers love about Kindle 3G – free 3G wireless, global wireless access, Pearl electronic ink display that’s easy to read even in bright sunlight.” And some ads.

The e-reader market is certainly hotting up just now, with Kobo recently announcing its new Kobo eReader Touch, priced at $129.99 and available early June. Then on Tuesday, from bookseller Barnes & Noble, came the Nook Simple Touch e-reader. Its new device is priced at $139 and shipping is scheduled to begin around June 10.

Of these three e-readers, only the Kindle lacks touchscreen capability. The new Nook and Kobo e-readers, however, have no 3G.

Amazon will be hoping the price of the ad-supported Kindle 3G will be enough to keep potential customers from taking too much interest in the offerings of its competitors. Anyone interested in the new device will be pleased to learn that it’s available from today.

The first Kindle was released in 2007 and the product has gone on to become a huge hit with bookworms around the world. As a result, sales of e-books continue to grow fast, with a recent report revealing that in February, for the first time ever in the US, e-books sold in greater numbers than the more traditional paper-and-ink product.

Topics
Video-editing app LumaFusion to get a Galaxy Tab S8 launch
How to share Kindle books with family and friends
CES 2023: The Lenovo Smart Paper looks like a great Kindle Scribe killer
Latest Amazon Kindle is 10% off, with delivery by December 14
Why a Kindle Paperwhite is the best $100 you can spend on Cyber Monday
Is the Samsung Galaxy A14 5G waterproof?
The best fitness trackers in 2023: our 10 favorite picks
Watch the Galaxy S23 Ultra get unboxed a week before launch
The best iPhone apps in 2023: 50+ apps you need to download now
The iPhone 15 Pro’s rumored new design is one I can’t wait for
The best folding phones in 2023: our 6 favorite foldables right now
You can finally take ECGs and track AFib on a Garmin smartwatch
I bought a $50 Apple Watch Ultra clone, and it blew me away