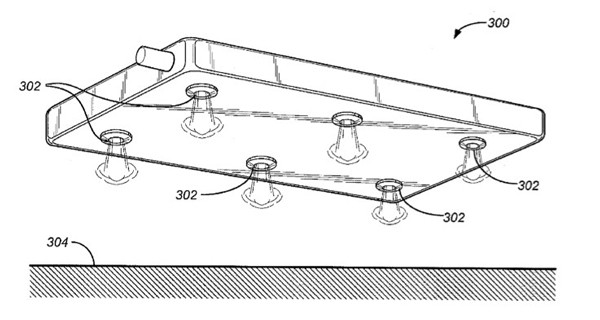 The smartphone has basically become an extension of ourselves–which is why it’s so devastating when little more than a two foot fall can destroy it. And now you can thank Jeff Bezos for keeping your precious device that much safer: The Amazon CEO, along with the company’s VP Greg Heart, has filed a patent to outfit smartphones and other handheld electronics with airbags. Geekwire first noticed the document, which explains that one out of three cell phones are lost or damaged within the first year of use. And the two Amazon execs want to do something about it.

Called a “damage avoidance system,” your device would detect it was falling and approximate the distance between it and the ground, and calculate its own velocity. This is more or less how car airbags function, so that a vehicle can determine when and when not to deploy airbags. A light fender bender won’t activate the safety instruments, but the impact from a more serious collision will. Using this same idea, your gadgets would use the data collected during a fall to conclude the risk in hitting the approaching surface, and if the risk is great enough, deploy airbags.

This monitoring system would likely be based on a smartphone’s gyroscope or some other built-in sensor. It would also be able to establish what side the phone was going to fall on, and activate the respective airbags. Sounds pretty intense for a pocket-sized product, but as the patent puts it, smartphone damages and repairs are pricey.

The patent just surfaced but was filed in February, possibly around when Amazon was putting its Android ecosystem plans into action. The company is getting into the gadget business and is speculated to be releasing two to three tablets in the near future. Looks like Bezos has mobile on the brain. The idea might sound a little outlandish, but in the interest of protecting your intellectual property (which is obviously becoming more and more important as patent wars heat up), it’s smart to put your name on any notion that seems like even a slight possibility.

Video-editing app LumaFusion to get a Galaxy Tab S8 launch
Forget Apple’s newest iPad — the Galaxy Tab S8 should be your next tablet
Save up to $350 on the Samsung Galaxy Z Fold 4, Z Flip 4
Samsung Galaxy S23: release date, specs, price, and all other rumors
This ridiculous smartwatch has a hidden pair of earbuds inside
The Galaxy Z Flip 5 might fix the Flip 4’s biggest design flaws
Don’t listen to billionaires like Elon Musk — app stores are fantastic
The best Samsung Galaxy S22 Ultra screen protectors for 2022
The most innovative tablets of 2022
Sunbird looks like the iMessage for Android app you’ve been waiting for
The most innovative smartphones of 2022
The most innovative smartwatches and wearables of 2022
These 6 things could make the Pixel 7a the perfect Google phone