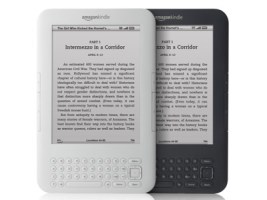 Amazon announced today the Kindle Library Lending feature, which will enable Kindle owners to borrow Kindle e-books from 11,000 libraries across the country. The service will be available for “all generations of Kindle device and free Kindle reading apps,” the company said today in a press release.

The service lets users check out (i.e. download) and read Kindle books from participating libraries, free of charge. Users will also be able to take notes and add bookmarks to their borrowed e-books — a big no-no with paper library books. If a user decides to purchase the book after borrowing, the annotations added to the borrowed copy automatically transfer to the purchased version.

“We’re excited that millions of Kindle customers will be able to borrow Kindle books from their local libraries,” said Jay Marine, Director, Amazon Kindle, in a statement.

While the idea of e-book borrowing may seem like a novel idea, similar services have been available on a wide variety of e-readers, from companies like Sony, as well as on the Barnes & Noble Nook reader, through a digital content provider OverDrive.

In fact, it is the OverDrive service that is powering Amazon’s e-borrowing feature. OverDrive will enable Amazon to deliver “a seamless library borrowing experience to Kindle customers,” Amazon says.

OverDrive also offers apps for the iPhone and iPad lines, as well as devices that run Google’s Android operating system, and BlackBerry devices, which allow users of those devices to borrow books from participating libraries.

Kindle users have been able to (unofficially) borrow e-books for some time, through the use of services like LendInk and BookLending.com. Unlike these services, however, Amazon’s borrowing feature appears to require actually visiting a library, rather than being allowed to perform the download from a home computer.

Video-editing app LumaFusion to get a Galaxy Tab S8 launch
The best ad-blocking apps for Android in 2022
How to turn on the haptic keyboard in iOS 16
How to use iOS 16 photo cutout to cut and paste images
How to change the time font on your iOS 16 lock screen
Apple comes clean with what it really thinks about iPhone 14’s Dynamic Island
Waiting for Touch ID on a new iPhone? This report has some bad news
Is the Apple Watch UItra too big? We took a bunch of photos to show you
Samsung Galaxy Watch 5 Pro vs. Galaxy Watch 4 Classic
Xiaomi’s new phone has a 200MP camera — and its photos are stunning
It’s official: Apple is required to make a USB-C iPhone by 2024
The Google Home app finally has the big redesign you’ve been waiting for
Relax, the EU’s scary USB-C rule won’t rob you of fast-charging benefits