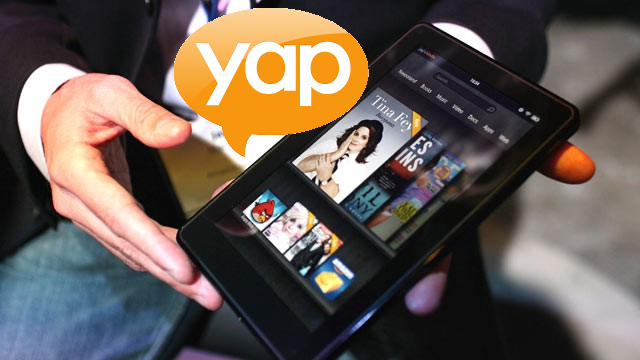 Amazon has been making big moves lately. The Kindle Fire and its app marketplace are becoming a more serious competitive threat, with hosting and storage services to back it up. In the scheme of things, Amazon is shaping up to not only challenge the digital retail space, but the Apple ecosystem has been put on notice ever since the rumors of an Amazon tablet surfaced.

And its most recent acquisition has given new life to the Amazon vs. iOS speculation. AllThingsD has confirmed that Amazon now owns Yap, which most recently has been serving as a voicemail-to-text service. However, previously, Yap’s focus was voice recognition technology, something the company was reportedly still developing.

Sound familiar? The iPhone 4S’ Siri has been the belle of the iOS ball ever since the refreshed iPhone 4 debuted last month. The all-encompassing virtual assistant has not only been the new handset’s major sell, it’s been heralded as a significant step toward ushering next-gen tech into the average consumer’s hands.

Whether you buy the Siri hype or not, the application has hit a chord with its audience, and Apple competitors know it. No sooner had the iPhone 4S launched then Android takes on Siri began to get some attention. And now, Amazon appears to be investing in its own attempts at artificial intelligence.

The easiest assumption to make right off that bat is that this means a future version of the Kindle Fire will include virtual assistant technology (it’s worth noting that Siri has not made its way to older versions of the iPhone or the iPad – however we’re due for the next-gen version which could very easily include the feature). From there, the grander guesses come fast and furiously: does this confirm that Amazon is pursuing a family of mobile devices—including smartphones and additional tablets? A larger model of the Kindle Fire is rumored to be part of Amazon’s roadmap.

Adding some drama to the deal is the fact that Amazon has kept incredibly quiet about the entire thing. The acquisition has been in the works since last month, and only after a blogger picked up on SEC filing did any of this come to light.

The jury is still out on whether or not Yap means Siri-like intelligence for Amazon products—whatever those products may be. If anything, this just confirms that Amazon won’t remain complacent in the mobile technology race.