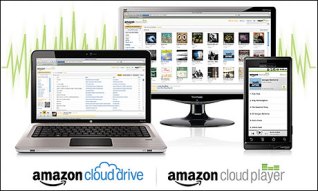 The era of mainstream cloud computing officially arrived today with Amazon’s launch of three cloud products: Cloud Drive, Cloud Player for Web and Cloud Player for Android. Through this release, Amazon has catapulted itself over the competition, to the forefront of consumer computing — and left Apple and Google eating its dust.

The Cloud Drive, news of which leaked out Monday, serves as a “digital locker” for storing any type of digital media, from music to high-definition movies to resumes, on the Amazon servers. Once stored, that media is accessible from any computer. And the Cloud Drive accepts media regardless of where it was purchased.

Amazon provides all registered customer with a free 5GB of Cloud Drive storage. Anyone who purchases an MP3 album through Amazon, however, is automatically upgraded to 20GB. Otherwise, pricing works out to $1-per-GB, per year, with pricing plan options at 20, 50, 200, 500 and 1000GB (1TB). To make the deal even sweeter, Amazon automatically uploads any MP3s purchased through its site to the customer’s Cloud Drive, and stores that music for free.

Using the new Cloud Player for Web, says Amazon, “[c]ustomers who have a computer with a Web browser can listen to their music” — it’s as simple as that. Cloud Player for Web is compatible with all major web browsers, including Internet Explorer, Firefox, Safari and Chrome. Cloud Player works on both PC and Intel-based Mac computers, and allows users to stream music directly from their Cloud Drive, or to download the music, which can then be uploaded onto an iPod or Zune (RIP) using iTunes or Windows Media Player.

Android users can also access the Cloud Player, which is now included as part of the Amazon MP3 App, directly from their smartphone. Through the mobile Cloud Player, users can search their music library, create playlists and download music directly to their Android handset.

Conspicuously absent from Amazon’s cloud offerings is support for any Apple iOS device. Apple is said to currently have its own “digital locker” service (most likely in the form of a revamped MobileMe service) available for customers later this year. Like all other Apple products, however, it’s likely that any cloud service it launches will only work with Apple devices and media purchased through iTunes.

Google is also rumored to be working on its own cloud offering, which could arrive as early as May. But until then, Amazon is at the head of the pack. And if its Cloud Drive and Cloud Player work as well as they should, it might just stay there.

Video-editing app LumaFusion to get a Galaxy Tab S8 launch
Does the iPhone 14 Pro have a battery life problem? It sure looks like it
How to add widgets to your iPhone lock screen on iOS 16
iOS 16’s infuriating copy-and-paste permission pop-up is being fixed
The best voice-recording apps for Android and iPhone
Amazon’s new Fire HD 8 tablets run faster, last longer, and start at $100
Samsung Galaxy S22 buying guide: everything you need to know
Watch the iPhone 14’s car crash detection get put to the test
When is my phone getting Android 13? Google, Samsung, OnePlus, and more
Everything (and we mean everything) to know about 5G on the iPhone
OnePlus 11 Pro leaked specs predict a zooming disappointment
How to turn off your iPhone 14 Pro’s always-on display
Your guide to the best e-book readers for 2022