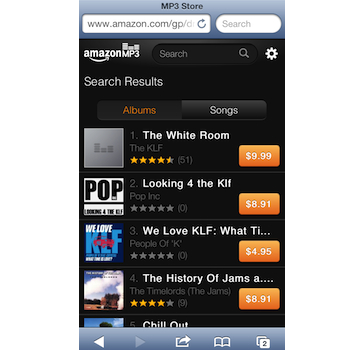 Amazon has opened its MP3 music store to owners of the iPhone, iPod Touch and the iPad; but not in the way Apple would prefer, as it has ignored the iTunes App Store and instead created its own HTML5-based Web-app. You may be wondering why, well, the answer is simple: by not providing an app, Amazon neatly avoids having to pay Apple’s mandatory 30-percent commission on every purchase. Using a Web-app to avoid Apple’s 30-percent charge is nothing new, with bookstores such as Kobo and newspapers like The Times all experimenting with it in the past.

If you’ve never used a web-app before, the experience is very similar to that of an app you’d download from the App Store. When you visit the Amazon store, it has an intuitive gesture control system to swipe through the carousels of individual songs, plus the option to listen to a 30-second preview before you buy. All the usual in-store features are there too, from recommendations based on previous purchases to a search bar with autocomplete. Amazon’s MP3 store is serious competition for iTunes, as for the first time, prices can be compared, quickly and easily, then purchased on the device.

To access Amazon’s MP3 store, you’ll need to open Safari and head to www.amazon.com/mp3, where a library of more than 22 million songs and two million albums awaits. Once inside, you can purchase music in the same way as you would normally, but the songs aren’t downloaded to your device, and are instead stored inside Amazon’s Cloud Player ready to be played back on any other connected device.

Amazon’s new Web store works with the Amazon Cloud Player app for iOS, which provides access to all your music stored in Amazon’s Cloud, ready to be streamed or downloaded for offline playback. It’s interesting to see many of the negative reviews left for the app in iTunes reference the inability to buy music through it, a problem which Amazon has now solved. It’s clearly a feature many have wanted, so will it go on to have an affect on iTunes’ sales figures?

Topics
Video-editing app LumaFusion to get a Galaxy Tab S8 launch
Why I hope Apple makes iOS 17 as boring as possible
How to block text messages on iPhone and Android
How to find downloaded files on your iPhone or Android smartphone
Beatspend app: how to make your own Spotify listening receipt
The best dating apps for 2023
The best webcams for 2023
The best USB-C headphone adapters for 2023
The best tablets for seniors for 2023
The best iPad keyboards for 2023
Is the Samsung Galaxy A14 5G waterproof?
The best fitness trackers in 2023: our 10 favorite picks
Watch the Galaxy S23 Ultra get unboxed a week before launch