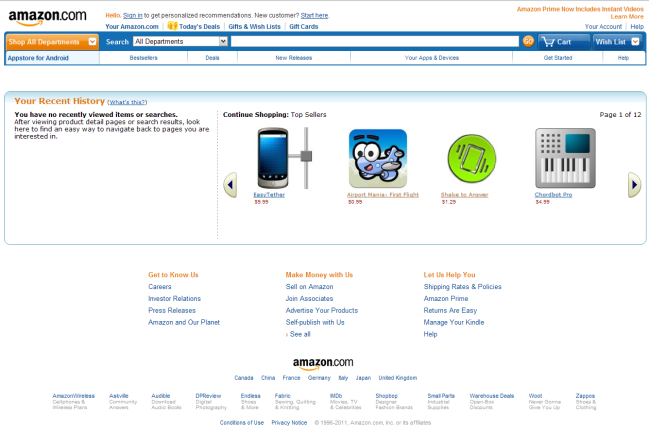 While fans are still busy rejoicing that Angry Birds Rio will debut in Amazon’s AppStore, we’re seeing leaked screenshots of what’s to come. German blog AndroidNews happened upon the information when its contributor randomly decided to visit “http://www.amazon.com/apps.” Lo and behold, there was the Amazon AppStore, featuring apps and prices in all their glory.

The URL now simply redirects to Amazon.com, but screenshots remain, and they suggest Amazon plans to undercut the Google Android Market. Amazon pulled this same move last year when it offered far lower prices on Kindle e-books, inciting the wrath of publishers. If Google chooses to challenge these prices (or if Android doesn’t amend them before an official launch of the app store), we could be looking at a repeat of the pricing war, which Amazon ended up ceding.

AndroidNews also found that Angry Birds Rio won’t be the only app Amazon will exclusively launch. It looks like Call of Duty: Modern Warfare: Force Recon will also make an appearance.

So in addition to cheaper prices, and some tempting exclusive offers, Amazon has Google’s recent malware busts on its side. The Android Marketplace has taken a media lashing lately, and the reports of virus-laden applications and Google’s inability to effectively monitor this content isn’t doing it any favors. It will be interesting to see if either platform can more effectively woo developers, and if they end up competing or existing harmoniously side-by-side.

To satiate your curiosity, check out the screenshot of a sampling of the apps and their prices below.