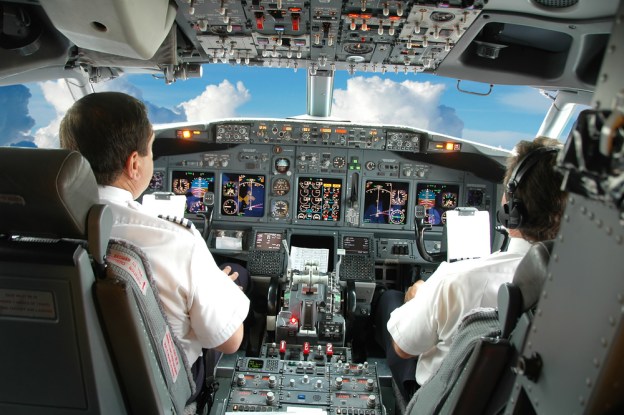 American Airlines is reported to be the first carrier to receive authorization from the Federal Aviation Authority allowing pilots to use iPads “in all phases of flight.” Pilots at United Airlines and Alaska Airlines are also known to be trying out Apple’s device during flights.

But don’t get the wrong idea here – they won’t be swiping the screen to take off or tilting the iPad to the right to turn the plane in that direction. According to a ZDNet report, the iPads will be taken on board AA aircraft from this Friday and used to replace the traditional paper-based flight bag, which is essentially a flight manual containing information such as navigation charts and details on how to operate the particular plane you’re flying in (that’s good to know).

An unnamed source told ZDNet that “the airline will begin iPad operations on B-777 aircraft, and then implement across all other fleets.”

The source continued: “Other airlines such as United, Alaska, and UPS are also reviewing this potential, but none have been approved to conduct flight operations in all phases of flight except American. This FAA approval cumulates the results from a six month test period whereby American flew thousands of hours with iPads to test and evaluate the product.”

A paper-based flight bag can consist of as many as 12,000 pages and weigh up to 38 pounds (17kg). The iPad tips the scales at less than 1.5 pounds (under 1kg). In August, United Airlines spelled out the benefits of ditching the old flight bag, saying it would save “nearly 16 million sheets of paper a year which is equivalent to more than 1,900 trees not cut down.”

It also said that lighter aircraft would result in savings of 326,000 gallons of jet fuel a year, thereby reducing greenhouse gas emissions by 3,208 metric tons.

The question needs to be asked though – it’s all very well ditching the heavy paper manuals, but what if the iPad seizes up just as the pilots are using it to find out what to do about the smoke billowing from the left engine? Or are the chances of engine failure and iPad failure happening at exactly the same time just too small to worry about?

Video-editing app LumaFusion to get a Galaxy Tab S8 launch
Reverse wireless charging on the iPhone gets one step closer to reality
Does the iPhone 14 have an always-on display? Know this before buying
How to hide photos on your iPhone with iOS 16
iPhone 14 Pro vs. iPhone 14 camera battle shows why small details matter
Google wants you to know Android apps aren’t just for phones anymore
I have a confession — I may have been wrong about the Apple Watch Ultra
The best Samsung Galaxy Watch 4 screen protectors
Can’t stand using Instagram in 2022? This app fixes everything you hate about it
Apple AirPods Pro 2 vs. Google Pixel Buds Pro
These 80+ apps could be running adware on your iPhone or Android device
Stage Manager is coming to older iPad Pro models after all
Samsung just copy-and-pasted iOS 16’s lock screen in its One UI 5 beta