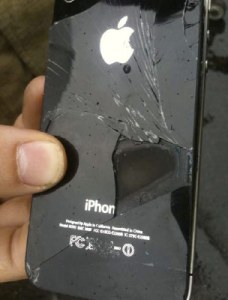 It sounds like there is yet another reason power off your cell phone on your next flight. Australian airline Regional Express issued a press release stating an incident involving an exploding iPhone. No one on the flight was harmed during the event that involved lots of smoke and a red glow.

Shortly after the regional flight from Lismore to Sydney landed, a passenger’s cell phone started “emitting a significant amount of dense smoke, accompanied by a red glow.” The report states that the flight attendant extinguished the red glow successfully, which implies that the glow was actually a fire, but there is no note of an open flame. A picture of the phone has been included, and it is indeed an iPhone 4.

The phone pictured appears to not only have some fire damage, but also had some damage to the back glass. Now it’s not clear how much damage was caused by the combustion, or by the flight attendant extinguishing the phone. While there may be a list of problems users of the iPhone 4 have complained about, explosion is not on the list but this isn’t the first report of an Apple iDevice exploding.

The phone in question has been given to the Australian Transport Safety Bureau for analysis. While it seems unlikely that an undamaged phone would randomly explode, it is possible, and the fact that the airline issued the press release and it didn’t come from a person seeking money from the company helps us believe the story. We have heard about an exploding Motorola Droid 2  before, but no one was hurt.

Video-editing app LumaFusion to get a Galaxy Tab S8 launch
How to enable and use Live Captions in iOS 16
Google Pixel 7 Pro vs. Apple iPhone 14 Pro: Which pro phone is best?
Apple Watch Series 8 vs. Apple Watch Series 7
The iPhone 14 Pro could be a gaming beast, but something is holding it back
Apple comes clean with what it really thinks about iPhone 14’s Dynamic Island
Waiting for Touch ID on a new iPhone? This report has some bad news
Is the Apple Watch UItra too big? We took a bunch of photos to show you
Samsung Galaxy Watch 5 Pro vs. Galaxy Watch 4 Classic
Xiaomi’s new phone has a 200MP camera — and its photos are stunning
It’s official: Apple is required to make a USB-C iPhone by 2024
The Google Home app finally has the big redesign you’ve been waiting for
Relax, the EU’s scary USB-C rule won’t rob you of fast-charging benefits