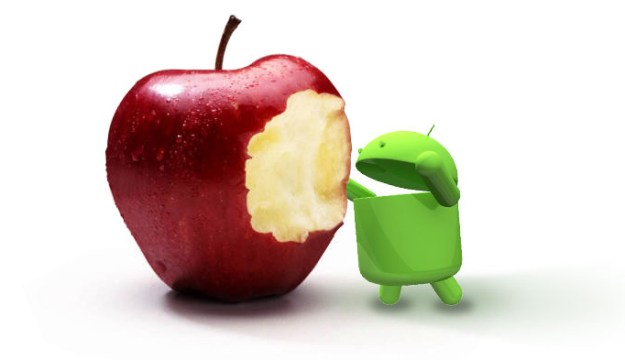 Apple’s had a rough few months, with recent stories showing Android’s growth over the last year. And it looks like it’s in for more stiff competition in the year ahead. As Forbes reports, 54.6 percent of consumers planning to buy a smartphone in the next three months are leaning towards an Android device. That’s in comparison to the 41.5 percent of the bracket looking into an iPhone. This goes hand-in-hand with the news from earlier today about Android’s astounding 177 percent market share growth over Q1 2012.

What Forbes refers to as the Android collective (That is, HTC, Motorola, LG, and Samsung) are pushing Apple, all together, as hard as they can, and it’s having a serious impact.

The Google Play Store is about even on downloads with the App Store, and although Apple’s doing far better in overall revenue from downloads, the tide has shifted faster over the last year than either side likely could have anticipated. And Android is expected to keep on growing this quarter, following the release of the Samsung Galaxy S4 this coming weekend (officially, anyway).

Interestingly, on Forbes’ “Hot or Not” meter, 67.6 percent of Millenials (that is, those born between 1983 and 1995) are all hot over the iPhone 5. The meter isn’t restricted to a single vote, so the Galaxy S4 is still enticing at about 61.9 percent heat, but more than a little less so. Millenials are also 7.7 percent more likely to be thinking about an iPhone than shoppers overall.

The iPhone 5S is coming in August or September, but is also expected to be little more than entirely incremental update. With the iPhone 6 almost certainly not hitting until 2014, and little more known about it than a rumored larger screen, one has to wonder whether or not Apple’s throne is secure.

If these studies are to be believed, the Millenials will be Apple’s key demographic in the U.S. for at least a little while yet, but there’s really no way to tell what changes to expect from the industry right now. The next few years will likely see a lot of evolution in the mobile industry, and a lot of these developments are wildcards.

Topics
Video-editing app LumaFusion to get a Galaxy Tab S8 launch
How to unlock a phone on every carrier in 2022
I thought iOS 16 would ruin my iPhone 8, but it shocked me
The best iPhone games to play in December 2022: Marvel Snap and more
The most innovative smartphones of 2022
Instafest app: How to make your own Spotify festival lineup
How old phones became the cool, good phones in 2022
The best Android apps for December 2022
The Galaxy Z Flip 5 might fix the Flip 4’s biggest design flaws
Don’t listen to billionaires like Elon Musk — app stores are fantastic
The best Samsung Galaxy S22 Ultra screen protectors for 2022
The most innovative tablets of 2022
Sunbird looks like the iMessage for Android app you’ve been waiting for