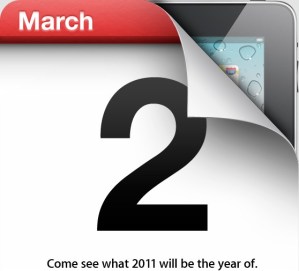 The time for rumors is over — at least as far as the iPad 2 event date is concerned. Apple has confirmed that it will hold an event on March 2 to announce the launch of the second-generation iPad tablet. The official word comes by way of invites sent to media outlets.

If you were following the news yesterday, you know it was difficult to separate fact from speculation surrounding the iPad 2 launch.

In the morning, Reuters reported that late design changes made to the new iPad had pushed the device’s production schedule back all the way to June. That information came from brokerage firm Yuanta Securities. Unfortunately for Apple and its Wall Street investors, that information wasn’t true.

Soon after the Reuters report went public, Apple stock prices dropped 2.9 percent to $340.29 in afternoon trading on Nasdaq. A report from All Things Digital promptly arrived, which cited “multiple sources” that said, no, actually the iPad 2 is right on schedule, and will be officially announced on March 2.

In other words, people were losing real money on apparently false information.

Reuters updated their story to reflect the All Things D report. At that point, however, it was still unclear what to believe: Apple hadn’t confirmed or denied anything. But the timing of the March 2 details leak appeared to many to come straight from Apple, whether they publicly admitted it or not.

Regardless of the source of the March 2 date, it now is clear that that is, indeed the correct information.

We don’t yet know any more specific details about the device — we’ll surely have to wait until next week for that. But rumor has it that the iPad 2 will be the same 9.7-inches as the original iPad, with a 1024×768 resolution screen. It’s expected to have two cameras, one front-facing for “FaceTime” video chat functionality. Models designed to connect to a wireless network could also have dual GSM/CDMA chips, allowing those devices to connect to both AT&T and Verizon services in the US.

The rumors that Apple also has a smaller “iPad 3” in the works as well remain just that — rumors.

So mark your calendars for March 2, people — the new iPad is nearly here.