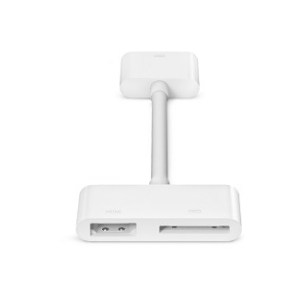 Among yesterday’s big iPad 2 and iOS 4.3 revelations at Apple’s press conference, another new product was announced that has the company’s mobile device users excited: an HDMI Out adapter, aka the Apple Digital AV Adapter.

The iPad 2 doesn’t make the step up to proper high-definition, but it’s got a considerably beefed-up graphics processor. Those who want to use the tablet as a TV-connected device will have the option thanks to this adapter which, like the iPad Camera Connection Kit, connects via the device’s charging port. The $39 attachment outputs video from the iPad 2 at 720p and offers screen mirroring at 1080p.

Apple’s newly posted product page for the just-announced item further reveals that the fun doesn’t stop with the second-gen iPad, however. It also supports the first-gen iPad, the iPhone 4 and the fourth-gen iPod Touch. The adapter only offers a maximum 720p output for these older devices, though the difference between 720p and 1080p is pretty minimal to most viewers’ eyes, especially on displays smaller than 50 inches. It’s going to be tough to complain about slightly less awesome HD output when you’re cruising around the web via your iPhone-to-TV connection.