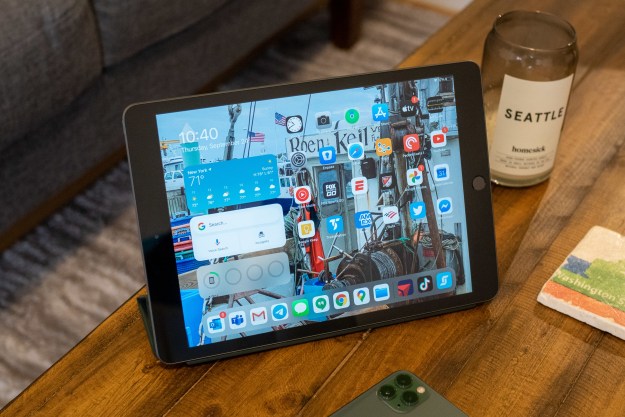 “When you need a tablet at a reasonable price, the iPad should be your first choice.”

In the technology world, “iPad” is an equally generic word to “Kleenex.” As Apple’s iPad lineup has expanded to include the Air and Pro models, it has retained a base iPad to anchor the group. It is, simply, the iPad. No year, no generation, no designation. It’s for the people who go online or walk into a store and say “I would like to buy an iPad today.” They can have one for just $329.

This is Apple’s 2020 iPad — the 8th generation for those who are counting. It’s the perfect tablet for people who just want a computing appliance.

Apple debuted an all-new design with the iPad Pro line, and just brought that design to the new iPad Air alongside a lovely new color palette. It hasn’t yet reached the economies of scale to be included in Apple’s cheap iPad, though — this looks and feels identical to the last few iPads. What’s there to say that hasn’t been repeated for years now? Apple has perfected this design.

The slab of aluminum has a perfectly flat back, pleasantly curved sides, and a little chamfer that perfectly meets the front glass. There is no flourish. It’s simply a portal to iPadOS 14. It’s an appliance, no different from your toaster or Keurig.

The 10.2-inch display is a step down from the iPad Air, though not in its 2160 x 1620 resolution, which produces the same density as the Air. However, you will notice this isn’t a laminated display. There’s a visible gap between the screen and the glass covering it, which is different from the iPad Air, iPad Pro, and every modern smartphone.

Despite this shortcoming, the screen’s colors and clarity are superb, and you only see the gap at certain viewing angles. Peak brightness is quoted at 500 nits, which is plenty — although outdoors, I have the brightness constantly pegged at 100%. The lack of lamination can cause issues outside, with more reflection in daylight than most tablets.

Unless you spend a ton of time using it outside, you’ll love this display.

I actually don’t mind the iPad’s old-school circular Touch ID sensor in terms of its functionality, but it sure does feel antiquated compared to other alternatives like an in-display fingerprint sensor, or the iPad Air’s side-mounted sensor integrated into the power button. I’d bet that this is the last iPad with the Touch ID button.

And I hope when the switch is made, the screen bezels also shrink, because they look comical. Bezels are useful for holding the tablet without touching the screen, but they don’t need to be this big.

The iPad is comfortable to hold at 1.08 pounds, and the weight is well distributed. Though you’re reminded of this design’s age again as it’s heavier than the iPad Air and iPad Pro, which both have dramatically more capability and larger displays. Regardless, it’s easy to hold the tablet up one-handed in portrait, or two-handed while watching a long video.

Video comes up short in terms of audio, though. There’s only a speaker on one side that’s easily covered by your hand and is rather tinny. The back is slippery, too, and if you want to prop it up for any sort of extended viewing or typing, you need Apple’s tri-fold Smart Cover — that’ll set you back a cool $50.

iOS 14 is the biggest change to the iPhone’s software in years, but the same can’t be said for iPadOS 14. The iPad benefits the most from the iOS 14 move to have notifications and alerts not take over your entire screen, and there’s a new Spotlight search interface. Other than that, it’s effectively iPadOS 13.

Perhaps the biggest addition is “Scribble,” which lets you use the Apple Pencil for handwriting-to-text recognition across the interface, but of course, that requires a $99 accessory, and is a different discussion altogether.

Unfortunately, iOS 14’s App Library isn’t here, so you’re stuck manually managing pages of apps and folders, which seems archaic now. You also can’t move widgets anywhere on the home screen, which I find to be a massive oversight — although you can pin the widget pane to the left third of the main home screen in landscape.

Multitasking remains complicated — there’s a lot of power here, but it’s hard to discover and seemingly impossible to master. There’s an awkward dance of gestures to call up apps, use split-screen, and trigger floating windows, with no discoverability hints — you kind of just have to try stuff.

Apple likely knows the typical base iPad customer is doing far less multitasking than those buying an Air or Pro, but don’t let that discourage you from trying to get the most out of it.

With the A12 Bionic processor and plenty of screen, you can get a lot done once you plumb the depths of gesture controls for multitasking. And the iPad never skips a beat — using two or three apps at once, even with other apps in the background, it doesn’t miss a step. The iPad is clearly built with specs to handle the lofty features and capabilities of a forthcoming iPadOS 17, not 14.

The only place that isn’t ready for the future is storage. The base 32GB just isn’t enough. After a couple of days, I already had used up 23GB — but thankfully, I ordered a 128GB model. I suggest everyone do the same. It’s just a shame Apple gouges you for another $100, or 30% more, to get it.

Battery life is, as expected, fantastic. The 32 watt-hour cell offers “never think about it” longevity. Apple advertises its usual “10 hours of surfing the web or watching video,” which of course isn’t at all representative of how people use iPads. I used it for a couple hours a day for an entire workweek, with a mix of every sort of light-duty load of social media apps, email and messaging, and keeping up with YouTube and podcasts — and I didn’t have to charge once. The iPad is particularly good at sitting idle for hours (or days) without using a discernible amount of power. If you’re not actively using it, the iPad isn’t draining.

Unfortunately, alongside the relics of the design and Touch ID sensor, the iPad also still uses Lightning to charge. Let’s hope this is the last iPad to use the old port, and it’ll join every other iPad (and MacBook, and every Android phone) on USB-C. It’s just downright better. At least the charger in the box is now USB-C on the wall side.

The iPad has a camera on the back, but it might as well not. The 8-megapixel sensor is useful for taking photos of receipts or to accompany an explanatory message to a friend, but that’s about it. The 1.2MP front-facing camera handles video call duty on your app of choice, up to 720p, with quality about on par with a laptop but lagging behind a modern phone. The ease with which you can dial up a FaceTime call with loved ones is in many ways more important than the quality of the camera itself.

The 8th-generation iPad isn’t exciting, but it is an exceptional tablet for $329. iPadOS 14 is easy to pick up and use, and can be extremely powerful for multitasking and light productivity work if you spend time learning it. Battery life is exceptional, and the display is great for the money. The hardware looks and feels old, but it’s incredibly effective — and most importantly, it’s built to last both physically and in terms of internal specs.

Saying that the iPad is $329 is a bit of a misnomer, however. For that money you get just 32GB of storage, which isn’t enough — you have to spend $429 to get 128GB. Ouch. And you’re basically required to get a Smart Cover that every iPad needs, which is $50 more. So, we’re really talking about a total package of $479.

But even at $429, it’s impossible to find a better overall tablet experience. Yes, if you need a keyboard for some thinly-veiled attempt at making an iPad a work machine, you should buy a Chromebook instead of a $159 keyboard accessory. But as a tablet, if you’re on a budget, you can’t do any better than the iPad.

The Samsung Galaxy Tab A 10.1 is cheaper and a similar size. But iPadOS is entirely superior to Android on tablets, and the app selection is so far ahead it doesn’t merit comparison. The Tab A 10.1 is only a better choice if you’re really tight on budget and have no need for the tablet beyond the simplest browsing and media watching.

If you have any need for your iPad to be used for work or school, there’s a great argument that you shouldn’t be buying an iPad of any kind. Once you get the higher storage option and Apple’s keyboard, you’re well into the territory of buying a laptop. A Lenovo Chromebook Duet or an Asus Chromebook Flip is a better choice, but then you’ll deal with missing out on the iPad app ecosystem.

Apple has an exceptional track record for updating the software on its tablets. For example, iPadOS 14 is available all the way back to the 5th generation iPad from 2017. There’s every expectation that you’ll get at least three yearly software updates to this iPad, and it’s clear there’s enough internal hardware to handle running it.

The Lightning charging port and Touch ID sensor with a physical home button are both areas that will start to feel old quicker, but those are minimal parts of the experience compared to being able to continue to use the latest software and apps for the next few years.

Yes. If you don’t have the budget allocated for an iPad Air, and just need a basic tablet as a secondary device for casual use, have one for just $329. Just be aware of the potential budget creep of wanting to buy the 128GB model and a Smart Cover for it.

Video-editing app LumaFusion to get a Galaxy Tab S8 launch
The Pixel Watch puts the best of Google’s software on your wrist for $350
Google Pixel Watch buying guide: everything you need to know
Best Prime Day Deals: What to expect on October 11 and 12
The best weather apps for the iPhone, iPad, and iPod Touch
How to quickly share Wi-Fi settings in Android
Best refurbished iPhone deals and sales for October 2022
Best refurbished iPad deals and sales for October 2022
Best Amazon Fire tablet deals for October 2022
The best Apple iPhone 14 screen protectors for 2022
Apple comes clean with what it really thinks about iPhone 14’s Dynamic Island
Waiting for Touch ID on a new iPhone? This report has some bad news
Is the Apple Watch UItra too big? We took a bunch of photos to show you