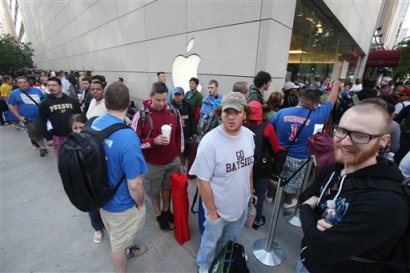 Apple Inc’s newest iPhone flew off store shelves, but lucky shoppers still managed on Friday to get their hands on one at least a dozen stores across the United States.

The smartphone appeared to be sold out for walk-in purchases at the vast majority of Apple outlets in the United States a day after it launched, the latest sign Apple was having a hard time meeting demand.

“The demand for the iPhone 4 is off the charts. We’re working hard to get them to everyone as quickly as possible,” Apple spokeswoman Natalie Kerris said. But there were a handful of stores where, to the surprise of some shoppers, the iPhone was indeed available.

Seattle had four stores with supply on Friday morning, while another city in the Pacific Northwest, Portland, Oregon, had two stores with iPhones in stock. Even a store in Los Angeles had some on hand, an outlet at The Grove — one of the city’s busiest and best-known malls.

“I came to shop for my boyfriend and realized the line wasn’t that long, so we decided to wait and get it,” said stylishly attired thirty-something Brittany Davis, camped out near the front of a line of over a hundred.

At a packed retail store in Bellevue Square — an upscale mall in Bellevue, Washington — about 25 “standby” potential customers waited in line for an iPhone. “I didn’t think I’d be getting one today,” said Chris Bohm, who waited an hour for his purchase ticket.

But in general, IPhone availability appeared to be the exception.

When contacted on Friday, roughly 60 Apple stores said the iPhone 4 was sold out. When asked when new ones might arrive, store employees responded they did not know. Some outlets reported they had received shipments that day, but they did not include iPhones. A few said they did not expect to get more iPhones for a week or more.

Outlets in Boston, Houston, Washington, Denver, Phoenix, Minneapolis, Chicago other metropolitan areas reported no iPhone 4s on hand for walk-in purchases on Friday. And none of the devices were available at Apple stores in at least 11 states, including Pennsylvania, Connecticut and Hawaii.

Only one outlet in North Carolina reported any stock — and that was almost gone, a store employee at Charlotte store said on Friday afternoon. One store in the Houston area and another in San Francisco said they had iPhone 4s available on Friday morning “if you come right now.” Apple has more than 200 retail outlets in the United States.

Wall Street does not think the tight supply will hurt demand for the latest Apple smartphone — although it is likely to dampen early sales figures.

Some analysts estimate the company sold 1 million to 1.5 million of the devices on the first day. The iPhone 4 went on sale in five countries on Thursday, creating a carnival-like atmosphere and drawing tens of thousands of eager fans to Apple stores and retail partners.

The launch was not without hiccups. Some users reported problems with reception due to the iPhone’s redesigned antenna. But few expect such glitches to impact sales.

The newest iPhone — the fourth-generation of the device — boasts a thinner profile, video calling and longer battery life.

Customers can order the iPhone 4 via Apple’s online store. But according to Apple’s website, orders for the iPhone 4 currently ship in 3 weeks.

AT&T Inc, the exclusive iPhone carrier in the United States, will have the smartphone available in its retail outlets starting Tuesday.

Apple received more than 600,000 preorders for the newest iPhone, the largest number ever. The company was forced to apologize when the online ordering system broke down after being swamped.

The shares of Cupertino, California-based Apple fell 0.9 percent to close at $266.70 on the Nasdaq.

Video-editing app LumaFusion to get a Galaxy Tab S8 launch
How to reset Apple AirPods and AirPods Pro
The best tablets for kids in 2022: Fire HD, iPads, and more
Apple AirPods Pro 2 vs. AirPods Pro: What’s new?
Truecaller brings AI-powered spam call filtering to any iOS or Android phone
How to use iOS 16 photo cutout to cut and paste images
The best selfie apps for iOS and Android
Experts say the iPhone 14’s satellite feature may have a dangerous side effect
How the Galaxy Z Flip 4 fixed my unhealthy phone habits
iOS 16’s biggest Apple Pay feature might be delayed until 2023
Best iPhone deals and sales for September 2022
Huawei’s Mate 50 Pro is here with an insane 200x zoom
Best Prime Day Deals: What to expect from the October event