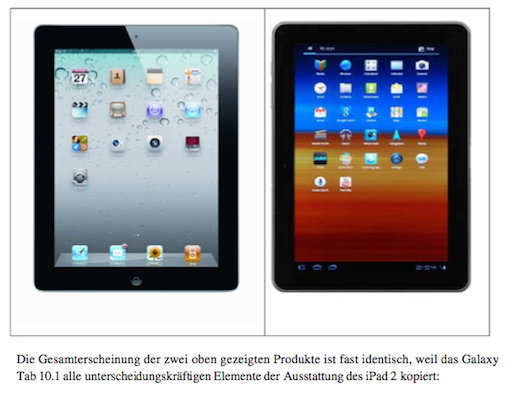 Apple’s case against Samsung is based on the fact that it believes the Samsung Tab 10.1 looks too much like its iPad. In the evidence provided by Apple to a European judge, the company included a side-by-side picture of the iPad and Tab 10.1 that might not be as accurate as possible. The picture in question has both products side by side, and they look strikingly similar in size and shape, which is why the Samsung tablet is currently banned from being sold in most European countries.

We have yet to hear a response from Apple or its lawyers about the issue, but are very interested in what they have to say. We also do not yet know if the same picture was used in Apple’s case blocking the Tab 10.1 in Australia.

It is too soon to know if the picture was altered on purpose or not, but either way it seems as though this situation is far from over. In a case that hinges on how similar two products look, this might be a pretty damaging hole in Apple’s case.