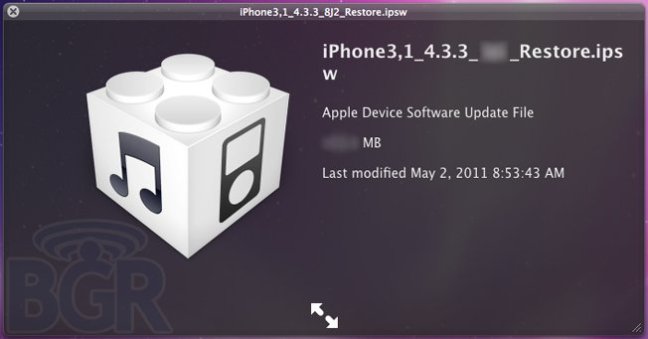 Any lingering trust issues you’re having with Apple post-Locationgate are well justified. IOS devices were recently revealed to have been tracking and saving user location, and despite any reassurance and denial from Apple, many users are wary to say the least.

In response to the accusations, Apple has said the tracking resulted from its A-GPS service and a glitch was saving more information than was necessary as well as continuing to operate even when users turned off location software. And a fix is on the way: BGR reports that its Apple source confirms iOS 4.3.3 is nearly ready for release, and could be coming to iPhones, iPads, and iPods within the next two weeks. According to an insider, iOS 4.3.3 will fix the location tracking bug, stop this data from being backed up via iTunes, reduce the size of the location database, cease the service when users opt out, improve battery life, and work out a few iPod kinks.

The fix couldn’t come soon enough. Apple has taken plenty of heat since the issue broke, and users have threatened to sue (to varying degrees of legitimacy). Cloud storage and consumer data harvesting in general has taken a big hit in the last couple weeks, as major companies like Sony, Amazon, TomTom, and Apple have been found guilty of mishandling mass amounts of their users’ information. Customers are, justifiably, on edge and it wouldn’t surprise us if Apple is pushing the OS upgrade much sooner than scheduled to alleviate its users’ mounting frustration.

We knew the upgrade was coming but we didn’t think Apple would be this quick. Apple released the iOS 4.3.3 upgrade today, far sooner than the speculated “within two weeks” timeline we originally heard. It’s now available via iTunes and “contains changes to the iOS crowd-source location database cache.” As promised, your iOS device will no longer backup the cache to iTunes and will delete it entirely when you turn off Location Services. The size of the cache will also be reduced, so you location history (should you choose to keep it intact) won’t be quite as thorough as before – previously location data was stored for up to a year, and it will be reduced to no more than seven days.