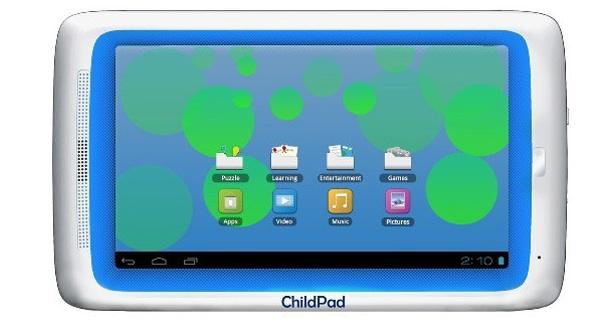 It’s true — give a kid a tablet computer and they intuitively know what to do with it, how to operate it, and unfortunately for some parents, how to spends lots of money buying apps for it.

French consumer electronics company Archos, realizing that there must be a fair few kids out there begging their parents for a tablet of their own, this week unveiled the Child Pad, a compact and lightweight 7-inch tablet powered by Android’s latest 4.0 operating system, otherwise known as Ice Cream Sandwich. It’s also fitted with a 1GHz processor and 1GB of RAM.

The new device incorporates a number of child-friendly features, including direct access to AppsLib’s Kids App Store. The store has 14 categories aimed at kids and 10,000 apps covering a wide range of genres such as games, entertainment, communication, multimedia, books, comics and sports.

In an attempt to make the tablet more appealing to children, Archos have designed an interface with colorful icons and home screen folders with links to games, entertainment and educational apps.

The Child Tablet also has parental controls and filters built into its browser so parents don’t have to waste time worrying about whether little Freddie has accidentally found his way onto an inappropriate website.

In a press release(pdf) about the new device, Archos founder and CEO Henri Crohas said, “We expect this tablet to bring a smile to the faces of kids and parents everywhere.”

The company said it believes the Child Tablet provides a “safe, fun, full tablet experience.” It should be in stores at the end of this month with a $129 price tag.

Archos’s Child Tab will go up against several other child-friendly tablets already on the market, including the Meep! tablet from a company based in Oregon and VTech’s InnoTab. There’s even one aimed at the toddler market, the Vinci Tab.