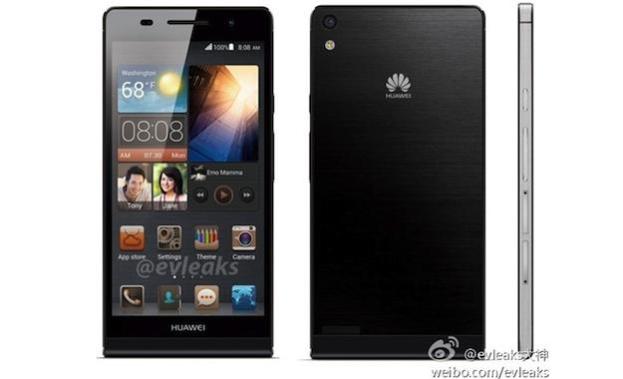 Earlier this month, Huawei sent out invitations to an event which will be held in London on June 18, saying what it had in store for us was not only beautiful, but worth waiting for. At the time, several rumors pointed to the European announcement of the Ascend P2, a device already seen at Mobile World Congress. Now though, another phone has forced its way into the spotlight as the main contender for the event.

The phone is the Huawei Ascend P6, which has previously been leaked as the P6-U06, and touted as the latest smartphone to claim the record of being the world’s thinnest. An official-looking press picture has been published by @evleaks, which you can see above, and according to Engadget, Huawei’s chairman even let slip it would indeed be the star of the show on June 18.

It’s certainly one of Huawei’s better looking phones, with a swish brushed metal effect rear panel, subtle branding, and that very thin profile. How thin? Previous leaks have suggested it will be 6.18mm thick, which beats the current record holder – the Alcatel One Touch Idol Ultra – by 0.27mm. In case you haven’t fondled Alcatel’s sleek phone, it’s 1.4mm thinner than the iPhone 5, and 1.7mm thinner than the Galaxy S4.

Other potential features include a quad-core, 1.5GHz processor, which is likely to be one of Huawei’s own Hisilicon chips, plus 2GB of RAM and an Android Jelly Bean operating system. The screen may measure 4.7-inches and have a 720p resolution, while the camera could have 8-megapixels. A range of body shell colors have been leaked too, including one in pink. What hasn’t been discussed is the battery, which is the most likely component to suffer in a device as wafer-thin as the Ascend P6. In case you’re curious, Alcatel squeezed an 1800mAh cell into the Idol Ultra.

We’ll bring you all the news from Huawei’s event on June 18.