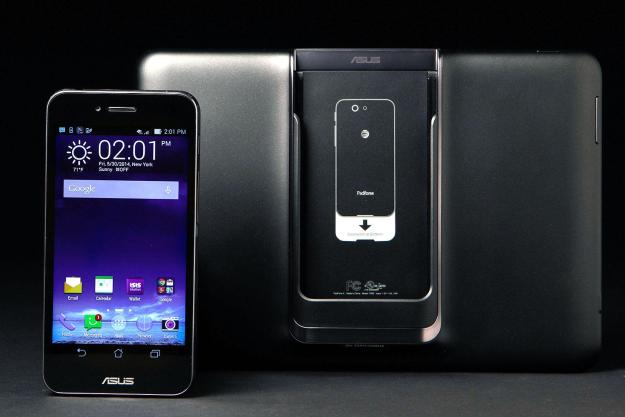 Have you ever had trouble moving files from your tablet to your phone? Have you ever wished that they were better connected? If you answered yes, you should probably check out Asus. The PC maker has been iterating on its PadFone concept of phones that turn into tablets for years, but they’ve never been available in the U.S. until now. AT&T has picked up the PadFone X, a modified version of the latest PadFone concept, and it’s out now for a surprisingly reasonable price of $550 (or $200 with a two-year contract).

But do you really want a phone that’s also a tablet? There are some compelling reasons why you might.

Two decent things … for the price of one: If you’re going to buy the PadFone X, you either don’t yet have a tablet, or the thought of another one makes you happy. If you don’t need or want a tablet, well, you’re in the wrong place. The PadFone X is a phone that ships with an 8.9-inch tablet dock. The tablet has an absurdly large bezel around it (at least an inch) for 2014, but aside from that it works well, as does the Android phone. The tablet is powered entirely by the phone, which snaps into the back of it without hassle.

Together, this package costs $550, or $200 with a two-year AT&T contract. That’s about the price of an iPhone 5C and a good $100+ less than high-end phones like the Galaxy S5. None of those phones come with a full-fledged tablet attachment in the box.

Tablet doubles as a battery: The other big bonus of having a “PadFone Station” tablet attachment is that it also doubles as a 4,990mAh battery, pretty much tripling the battery life of the PadFone. By default, the tablet will charge your phone, and when they’re docked, you can charge both together with a standard Micro USB port. It’s not a bad setup.

Comfortable to hold: Though they are made of plastic, not premium aluminum like the HTC One M8 and iPhone 5S, the PadFone X is built well, and both the tablet and phone are comfortable to hold. The tablet is a little heavy and bulky, looking more like a tablet from two years ago than one from today, but it does the job, and the phone is in good working order, with good power and volume button placement on the right side.

The tablet is powered entirely by the phone, which snaps into the back of it without hassle.

Beautiful screens: Both the Station dock and the PadFone have 1920 x 1080 pixel screens, which are gorgeous and difficult to see pixels on. For its price, we would have imagined Asus would have cheaped out with a 720p display, but it has chosen the premium route here, and both devices benefit from it.

Powerful specs, expandable memory: The PadFone X isn’t running the latest Qualcomm Snapdragon 801 processor like the Galaxy S5 and HTC One M8, but it’s only one generation behind. It’s packed with a 2.3GHz quad-core Snapdragon 800, which was top of the line until spring 2014. This score represents a good amount of processing power for anyone, and coupled with 2GB of RAM, it does the trick nicely.

In the Quadrant benchmark test, it achieved a 20,000 which is up there with the best, and in the 3DMark Ice Storm Unlimited test, it got almost 20,000 as well, which is a superb gaming score for a phone. The phone has 16GB of internal memory with expandable MicroSD, so you’re good there, too.

Decent camera: The 13-megapixel camera on the PadFone X will win no awards, but it does the job better than some competitors (we’re looking at you, Moto X). We’ve had no standout issues with the camera. It focuses, balances light well enough, and produces some stellar shots outdoors and in some close-up conditions.

Tablet screen is oddly small: The PadFone Station tablet attachment has a great screen resolution and battery capacity, but it’s on the heavy side, feels bulky, and the screen is strangely small for its size. Tablets a couple years ago had 1-inch bezels, but not these days. We got used to the bezel, but we still don’t love it. Asus should have shrunk the tablet size, or increased the screen size.

If you pull out your phone while apps are open, you’ll get an error.

Apps crash when you pull the phone out of the dock: Almost any app will run properly in tablet mode and phone mode, but if you pull out your phone while apps are open, you’ll get an error. Asus’ built-in apps are fully compatible with switching orientations on the fly and can make the jump from phone screen to tablet screen, but Netflix, Google apps, and every other app we’ve tried crashes when you pull your phone out of its tablet socket. You’ll quickly learn to close apps before you yank the phone out, especially if you are in the middle of a task.

The other peripherals don’t cut it: We love the PadFone Station tablet dock, but man do we dislike the other two peripherals Asus showed us. There is a keyboard dock, but it doesn’t actually connect to the PadFone Station (there’s a rubber holder and it connects via Bluetooth). The tablet can slide out and the keyboard doesn’t want to stay synced. It’s annoying, and that’s before you consider how insanely (and we don’t use that word lightly) heavy it is. With the keyboard attachment, the PadFone feels downright heavy. Heavier than any tablet-keyboard combo we’ve ever used.

Asus also sells a cover case for the phone and tablet, but this isn’t worth its weight in cheap plastic. It isn’t a smart cover, so it won’t turn your screen on or off, the screen protector is light and flimsy, and though it’s supposed to support the tablet upright with an Apple-like folding cover, it doesn’t support it well enough. Either your tablet will slowly lean further and further back or it will collapse all together.

We don’t recommend you buy either of these accessories.

Easily blockable speaker: No tablet or phone speakers are notable outside of the HTC One M8, but the PadFone has a particularly blockable rear speaker. Set it on anything, and the sound will become muffled, much like older Samsung phones from a couple years ago. The tablet dock at least has front-facing speakers that do the job. This isn’t a dealbreaker for us, but it was an annoyance.

A lot of AT&T bloatware: AT&T has Asus over a barrel. Asus desperately wants to sell phones in the U.S. market but most of the major carriers snub the Taiwanese manufacturer. AT&T is letting it sell the PadFone X, but its services are heavily integrated, right down to a Notifications menu styled in AT&T’s signature blue and white. A lot of other AT&T apps are included, most of which you won’t want. Luckily, you can disable most of these apps in Settings.

Battery life meets minimum requirements: We like that Asus includes a huge extra battery with the tablet attachment, but the standard 2,300mAh battery in the phone portion of the PadFone isn’t stupendous. Because the phone runs on the older Snapdragon 800 processor, it doesn’t benefit from the big battery life improvements Qualcomm made with the Snapdragon 801. It should last you 10 to 12 hours of heavy use, but you’ll need to snap it into the tablet or give it a recharge if you have a long day.

The Asus PadFone X is a winner. It’s not the best phone, and it’s far from the best tablet, but for the price, it’s hard to beat it. At $550, you get a very good phone and a decent tablet attachment that lets you use your apps in a new way. We did have some issues with apps crashing if you yank the phone out of the dock while using them, but we got used to closing our apps before disconnecting.

Even if you dislike the tablet and don’t use it much, for the price, this is a good phone by itself. We can’t wait to see what Asus comes up with next.