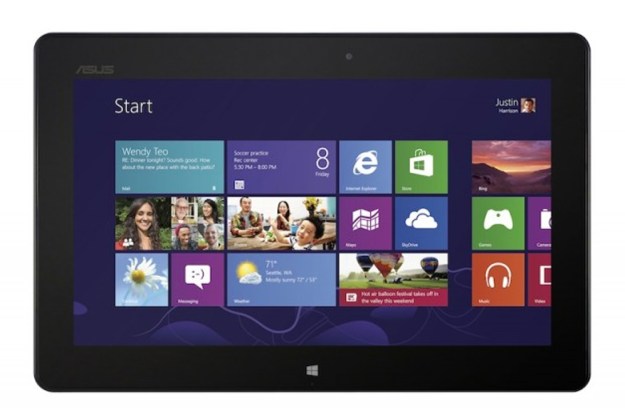 “Until the apps are there and Microsoft is able to patch up some of the bugs in Windows RT, we can’t recommend the Vivo Tab to any except the hardiest early adopters.”

With the Vivo Tab, Asus joins more than two dozen other cutting-edge laptops, tablets, and hybrids running some version of Windows 8 this holiday season. (It’s actually the first model sporting Windows RT that Digital Trends has reviewed.) With Windows 8, Microsoft is boldly reinventing its Windows operating system, and to mark the occasion, most device manufacturers are rethinking the idea of tablets and PCs as well.

In the hybrid tablet game, Asus has a leg up. In the last two years, it has been one of the only successful manufacturers making Android tablets, thanks to its Transformer line. The Vivo Tab is essentially the next generation of the Transformer series. It runs on the same hardware and a limited version of Windows 8 called “Windows RT.” Can Windows 8 match Android? Does the Keyboard dock turn this tablet into a full-fledged PC? Find out below.

Asus has been making tablets with snap-on keyboard docks for a year and a half now, and it shows. The Vivo Tab RT is as thin and sleek looking as any tablet you’re going to find in today’s market, which is dominated by the iPad. It follows the familiar 10.1-inch widescreen format that seems to be popular (though we prefer tablets more in the 8-inch range), but is actually a bit thinner and lighter than the newest 9.7-inch iPad.

Though some may not like the grayish purple brushed-metal look, the hardware of the Vivo Tab appears relatively sturdy, and hasn’t shown any major defects when we tried to flex and test the strength of its metal exterior. We don’t do drop tests, but we think there’s a good shot this might survive. Just don’t drop it on concrete.

The one nagging issue we’ve had with the hardware is the haptic touch Windows button, which is supposed to take you back to the Start screen. Haptic buttons are common on smartphones, but relatively new to tablets, and it shows. The Windows button does work, but you have to really press on it firmly to get it to register, sometimes more than once. Luckily, when the tablet is docked, the keyboard has its own Windows button.

Asus has a mixed history with its keyboard docks. Some of them have worked okay, but others have been tipsy, fragile, and flimsy. The keyboard dock sold alongside the Vivo Tab RT is one of Asus’s better designs. Unlike the Transformer Pad Infinity, the Vivo Tab is not prone to tipping over and seems to have a more stable hinge mechanism. When you snap the tablet in, it still lacks a good reliable snap to let you know that you’re good to go, but giving the tablet a tug will tell you whether you’re a winner in the game of docking or if you need to try again.

Overall, the metal dock is a bit cramped (like any 10-inch keyboard), but gets the job done. So far, we haven’t had issues with accidentally tapping the mouse trackpad constantly while typing either – another problem of earlier designs. The keyboard dock does what it needs to do. You can snap it in when you need to type a Word document or get something done, and it doesn’t add too much bulk to the overall tablet. Unless you’re going to be doing heavy typing though, you may not need it.

I’d like to say a lot of positive things about Windows RT, but this is the third time I’ve started to write this review. The first two times, I tried to write it on Microsoft Word on the Vivo Tab, but lost all of my work when Windows RT decided to randomly shut itself off. This has been a common occurrence during the days I’ve been testing the Vivo Tab.

For those who need a refresher: Windows RT is the tablet-only version of Windows 8. And Windows 8, if you don’t know, is Microsoft’s big attempt to remake its famous OS to behave more like smartphone operating systems. Instead of windows, you now have a Start screen full of Live Tiles, which are like icon shortcuts that can display information. Everything is built for touch.

Windows RT has been designed to look and act identically to Windows 8 with one key exception: It is not backward compatible with any Windows 7 or Windows Vista software. That means that Spotify, Photoshop, iTunes, Chrome, or any other applications that you use will not be compatible with this tablet. Instead, Microsoft is relying on developers to make all new Windows-8-style apps, which you can get through its new Windows app store. Currently, there are about 5,000 or so… not a lot. Few of these are noteworthy. Video fans may be happy to hear that Hulu Plus and Netflix are now available, but they may be the two most notable apps right now. Games are now being sold through a separate Xbox store, and are similarly thin in numbers.

Four Microsoft Office applications are included with every Windows RT device: Word, Excel, PowerPoint, and OneNote (2013). These apps all work, but they run in the classic desktop environment, meaning they’re not touch friendly and run slower than other apps.

We’ll be writing more about Windows 8 and Windows RT in the future, but so far, we can’t recommend an RT tablet like the Vivo Tab to anyone who isn’t prepared to live on the bleeding edge. This is a brand-new operating system. It has bugs and won’t have a robust app ecosystem for a couple years. Buy at your own risk. While we like many aspects of the new Windows and it is quite touch friendly, it’s a fraction as useful and solid as an iPad, and there are portions of the interface that are downright baffling. Read our top complaints about Windows 8.

Though it may look like a laptop, the Asus Vivo Tab RT has more in common with a smartphone than you may realize. This device runs on a mobile ARM processor and compares well to other top tablets, but its power can’t match a full PC. It runs on a 1.3GHz quad-core Nvidia Tegra 3 processor backed by 2GB of RAM and 32GB or 64GB of storage. The 10.1-inch screen has a 1366 x 768 pixel resolution, which isn’t quite top of the line, but looks good enough. Viewing angles could be better, as images do get significantly harder to watch as you tilt the screen, but they aren’t worse than your average tablet. Just, again, don’t expect an iPad here.

The Vivo Tab does, unfortunately, charge with a proprietary port, but it makes up for this deficiency somewhat due to its easily accessible microSD slot and hidden Micro HDMI port on the upper left side.

There are front and rear cameras on the Vivo Tab, but much like other tablets, this is not a device you should buy for its camera. The 8-megapixel rear camera with LED flash is good enough to use in a pinch, but we aren’t big fans of either of the two (yes two) camera apps included. Microsoft’s app doesn’t even have a proper shutter button (missing buttons and navigation seems to be a recurring theme in Windows RT), and Asus’s camera app is incredibly slow at focusing. The 2-megapixel front-facing webcam does its job adequately.

Asus is claiming “all day” battery life on the Vivo Tab, and because it runs on ARM architecture and the Tegra 3 processor, it should perform consistently with most tablets. From our best estimates, we’ve been getting roughly 8 to 10 hours per charge without the keyboard dock, which roughly doubles the battery life of the unit.

Asus has made a great tablet with a decent keyboard dock, but it’s hampered by Windows RT, which is just too new of an operating system to be of great value to most of you. There just aren’t enough apps or software that can run on this tablet, leaving you to mostly use the Web browser, which is also harmed by the fact that RT can’t install browser plugins. If it were backward compatible with anything – Windows Phone, Windows 7, Zune, anything – then at least there would be some catalog of software to fall back on, but there just isn’t.

Until the apps are there and Microsoft is able to patch up some of the bugs in Windows RT, we can’t recommend the Vivo Tab to any except the hardiest early adopters. At $600 for the tablet and keyboard dock, it’s also quite expensive. Though you’re getting a keyboard dock, you’ll still be paying more than $100 more than the entry-level iPad 3, which is a far more capable machine at this time.

Video-editing app LumaFusion to get a Galaxy Tab S8 launch
Best Prime Day Tablet Deals: What to expect on October 11
Best Samsung Galaxy deals for October 2022
Best tablet deals for October 2022
The best iPhone games to play in October 2022: Lord of the Rings and more
Best Amazon Fire tablet deals for October 2022
The best Apple iPhone 14 screen protectors for 2022
Apple comes clean with what it really thinks about iPhone 14’s Dynamic Island
Waiting for Touch ID on a new iPhone? This report has some bad news
Is the Apple Watch UItra too big? We took a bunch of photos to show you
Samsung Galaxy Watch 5 Pro vs. Galaxy Watch 4 Classic
Xiaomi’s new phone has a 200MP camera — and its photos are stunning
It’s official: Apple is required to make a USB-C iPhone by 2024