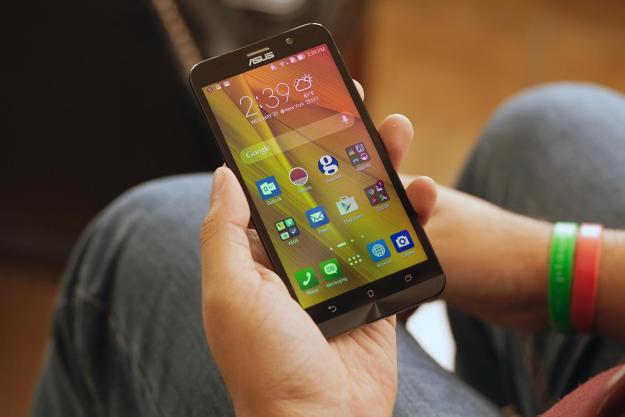 Most people recognize Asus from its laptops and a smattering of Android tablets, but outside the United States, it also sells a lot of phones – 10 million to date, in fact.

Its ZenFone smartphone lineup promises solid performance and a well-rounded feature set at an affordable price, and the ZenFone 2 is the latest addition. It brings some pretty impressive specs to the table for its reasonable $300 price tag. But alongside established budget favorites like the OnePlus One, does this dark-horse contender bring enough features to warrant a second look?

Powerful hardware inside of so-so design

At $300, you wouldn’t expect an extraordinary design from the ZenFone 2, and Asus obliges with palatable mediocrity. The phone has a relatively straightforward and boring look, though the satisfyingly-clicky rear-mounted volume buttons imbue it with some much-needed personality. Unfortunately, the same can’t be said of the power button, which is inconveniently mounted on top of the phone and mushy feeling. I’ve actually had to do double takes in order to make sure I actually pressed the power button.

A 5.5-inch phone will never be easy to grasp in one hand, but the ZenFone 2 feels big even in this size class. If only Asus would trim the sides a bit, we could have something more along the lines of the LG G3 and its successor, the LG G4, in terms of ergonomics. Fortunately, the grippy brushed feeling of the back cover makes it easier to wrangle.

The display, a 1080p LCD, certainly impresses. It won’t deliver the punchy colors you’ve seen on Samsung’s OLED-powered Galaxy S smartphones, but the ZenFone 2’s display is far from bad at this price. Since it’s an IPS panel, it delivers wide enough viewing angles, but we do wish it got brighter.

Our review unit is powered by a quad-core 2.3GHz Intel Atom Z3580 CPU and a PowerVR G6430 GPU, along with a whopping 4GB of RAM. Asus also makes a cheaper model ($200) that cuts the RAM in half and lowers the clock speed to 1.8GHz. We can’t speak for that one, but the top-tier model has plenty of power. Going through menus, opening apps, and playing games is a breeze on the ZenFone 2. It gets quite warm under duress, but you won’t need oven mitts to handle it.

Software stumbles, but ever so slightly

Even though the ZenFone 2 runs Android 5.0 Lollipop, it does so with Asus’ ZenUI on top of it all. This interface favors simple colors and shadows, which looks good without completely breaking Google’s Material Design guidelines.

But that doesn’t excuse the software bloat. The ZenFone 2 comes with basic utilities, such as Flashlight, Mirror, and Setup Wizard, that for some reason have their own apps. The worst offenders, however, are the pre-installed virus scanners and utilities, such as Clean Master and Dr. Safety, which stumble over each other trying to make sure your ZenFone 2 is threat-free. Thankfully, most of these can be uninstalled, and for those that can’t, you can always disable them.

One area where the ZenFone 2’s $300 price tag really shows is in the camera, which includes none of the fancy optical image stabilization, laser focus, or phase detection you might come to expect on powerful Android smartphones.

Still, it performs adequately, especially with plentiful lighting. Details were relatively sharp, and colors like the pink of the flower were captured accurately. Moving things inside, however, exposes a noticeable drop in quality, as digital noise silently creeps in.

Asus’ highly-touted Low Light and Night modes do their jobs, producing slightly better shots when in dim environments. However, you will need a very steady hand to take anything close to an acceptable image with them. Most of the images I took in Low Light mode ended up blurry.

Video turned out decent, though the lack of physical stabilization hurt the overall quality. The settings could also be confusing for newcomers: What’s the difference, for instance, between “performance” and “quality”?

The ZenFone’s 3,000mAh battery kept it ticking the entire day, but only just. With several email accounts pushing emails, my standard array of social-networking apps, and several sessions of Implosion and Sky Force, along with texting and phone calls, I usually ended my day with 15 to 20 percent battery life. For me, that’s a job well done, though I’d be lying if I said I wasn’t expecting just a little more, given the large capacity.

It may look bland. It may be slightly unwieldy. It may have an average camera. But these negatives start to soften once you notice the $300 price tag on the ZenFone 2. And if you opt for the cheaper $200 variant, you could probably excuse a lot more.

The main threat to the more expensive ZenFone 2 is the $350 OnePlus One. It has similar performance, but comes with stock Android, which will appeal to anyone who cringes at the bloatware crammed onto the ZenFone. At the same time, it is $50 more expensive, which will easily net you a 64GB microSD card to pop in the ZenFone 2.

Ultimately, the $300 price tag of the ZenFone 2 makes it a fantastic deal and one we would recommend to anyone looking for an unlocked smartphone with punch.

Video-editing app LumaFusion to get a Galaxy Tab S8 launch
Can’t stand using Instagram in 2022? This app fixes everything you hate about it
Google wants you to know Android apps aren’t just for phones anymore
The best ad-blocking apps for Android in 2022
Nreal’s Air AR glasses head to the U.S., ready to rock with iPhones
Pixel Watch design video reveals what Google doesn’t want you to see
The best wireless keyboards for 2022
The best wireless earbuds for 2022
Apple rolls out iOS 16 update to fix frustrating camera-shake, paste bugs
Hey look, the iPhone’s Dynamic Island has come to … Android?!?
Why I stopped wearing my smartwatch — and why I haven’t looked back
How to transfer your SIM from an Android phone to an iPhone 14
Google Pixel Tablet leak reveals key specs about the mysterious device