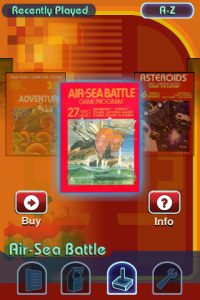 Atari has dusted off 100 of its classic titles and released them in Apple’s App Store as a Greatest Hits collection app. The app is free to download and includes a complimentary copy of Pong. The 99 additional games, however, must be purchased as part of an in-app payment system.

The collection includes 18 titles from Atari arcades as well as 92 Atari 2600 titles (there’s some overlap in titles covered by the two gaming systems). Games are sold in packs of three or four for $0.99 or users can opt to purchase the entire collection for $14.99. Some of the games include BlueTooth support to enable multiplayer modes.

Gamers old enough to feel nostalgic for Atari can look forward to a healthy collection of titles ported on to their iPhones or iPads. Highlights include Missile Command, Space Raiders, Super Breakout, and Centipede 2600. Some retro-game enthusiasts will be disappointed to find some notable absences, namely Pitfall and Pac-Man. Atari also made sure to include multiple versions of some titles,  to be sure and satisfy the Atari-connoisseur.

It’s not Atari’s first venture into the iOS. The former gaming powerhouse has released updated versions of Centipede, Missile Command and Super Breakout as individual apps. Retro-gaming has become something of a fad in Apple’s App Store. Last year, a developer released an MS DOS emulator that included versions of Wolfenstein 3D, Duke Nukem and Major Stryker. There’s also a Commodore 64 emulator that includes the titles International Karate, Super Pipeline and Space Taxi.

Video-editing app LumaFusion to get a Galaxy Tab S8 launch
The best iPhone 11 wallet cases and covers
Best tablet deals for September 2022
Best iPhone deals and sales for September 2022
Experts say the iPhone 14’s satellite feature may have a dangerous side effect
The best Samsung Galaxy Tab S8 keyboard cases
Apple AirPods Pro 2 vs. Samsung Galaxy Buds 2 Pro
How to add multiple wallpapers and change your home screen on iOS 16
The best touchscreen laptops for 2022
Which $1,000 phone has the better camera — iPhone 14 Pro or Galaxy Z Flip 4?
How to change the time font on your iOS 16 lock screen
How to use iOS 16 photo cutout to cut and paste images
The best selfie apps for iOS and Android