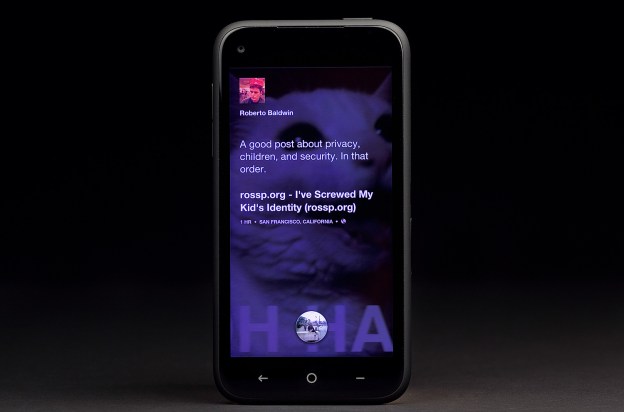 A month after its official announcement, the very first device to feature Facebook Home installed as standard has been reduced in price from $100 with a two-year agreement, to a mere $1 with the same contract. That’s right, AT&T has decided the three-figure price tag attached to the HTC First was a little excessive, and now asks for a single dollar in exchange for the phone.

The HTC First is a vessel for Facebook Home, the social network’s answer to the problem of how to make a Facebook phone without actually going to the trouble of producing and selling one. The app has received lukewarm reviews, with our own Molly McHugh calling it, “Beautifully designed and ambitious,” but certainly not a replacement for Android.

Facebook Home can be downloaded from Google Play, but only for a select few Android phones, forcing those who didn’t own one of them to consider the HTC First. Except, sadly, the First doesn’t have much tech appeal, primarily due to the 5-megapixel camera. However, as we noted in our review, the 720p, 4.3-inch screen is good, as is the dual-core, 1.4GHz Snapdragon processor.

When companies drastically reduce the price of a product, it’s rarely the sign of it selling well, and that’s certainly not what HTC needs at the moment. Although the HTC One has been attracting plenty of fans, the firm is still reporting borderline disastrous financial results, and despite the glitter of Facebook Home, the HTC First may not be helping.

However, the price drop does make the HTC First more attractive; not because of Facebook Home, but because it can be turned off. This reveals stock Android 4.1 Jelly Bean underneath, and that’s great to use. It may not get all the upgrade benefits of the Nexus 4 in the future, but it’s hard to ignore a $1 phone with a clean install of Android.