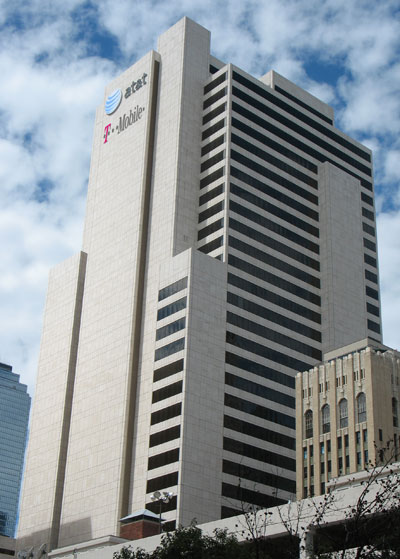 AT&T massively reshaped the US mobile industry landscape Sunday with its planned purchase of T-Mobile USA. The stunning $39 billion acquisition will merge AT&T, the second largest wireless carrier, with T-Mobile, the fourth largest, to create the biggest mobile company in the county. This pushes Verizon back to number two and makes Sprint’s number three seat seem even more distant.

If federal regulators approve the deal — and they most likely will — the corporate union will consolidate 90 percent of the wireless business in America down to only three companies with 43 percent to AT&T alone. This likely means big changes for subscribers of both AT&T and T-Mobile (but especially T-Mobile) and they’re not all good. Here are the seven best, worst and ugliest outcomes from AT&T’s purchase of T-Mobile USA.

1. Expanded coverage
Through the purchase of T-Mobile, AT&T gains both additional cell towers and wireless spectrum. This is great news for both AT&T and T-Mobile customers as coverage should increase for all areas. For such benefits to become reality however, AT&T must first enable T-Mobile towers, which transmit a 3G signal at a different frequency than AT&T, to work with current 3G-enabled AT&T phones, and vice versa.

More importantly, AT&T-T-Mobile will sit at the forefront of the 4G movement — the future of wireless. T-Mobile already boasts “the nation’s first 4G network” with its HSPA+ offerings, although it must be said that this is not technically considered 4G to some engineers. AT&T — which also offers HSPA+ but does not advertise it as a 4G connection — has announced plans to launch its 4G LTE network sometime this year. According to AT&T President Ralph De La Vega, the merger will bring LTE access to “95 percent of the U.S. population,” which includes “not just major cities but [also] rural America.”

This is one of AT&T’s best arguments to the US government for why the deal should be approved, as President Obama recently announced the expansion of 4G wireless access nationwide as one of his administration’s top priorities.

2. Higher prices for everyone
Fewer companies means less competition. And despite what AT&T wants you to believe, this always results in higher prices for customers. By swallowing T-Mobile USA, AT&T has killed off a fierce rival — one that has consistently offered better value plans that AT&T couldn’t bend far enough down to hand out. It’s possible that AT&T could hang on to T-Mobile’s budget offerings to keep a hold on the lower-end market, but don’t count on it. T-Mobile is in the no-mans-land area of wireless. One step up from Boost Mobile and Cricket Wireless, but considered a challenger brand when compared to the big three – AT&T, Verizon and Sprint.

Regardless, if the plan is approved, anyone who wants to sign with a major wireless carrier is left with three choices: AT&T-T-Mobile, Verizon Wireless and Sprint Nextel. Unfortunately, Sprint (which came out firmly against the deal) would be roughly one third the size of an AT&T-T-Mobile conglomerate and much less competitive overall. Because of this disparity between carriers, the prices of the US mobile market will be essentially controlled by the top two largest cellular companies: AT&T-T-Mobile and Verizon — not exactly the kind of business environment that results in good deals.

3. T-Mobile users get the iPhone — in a year
Yes, it is a near certainty that current T-Mobile subscribers will eventually have access to Apple’s iPhone without having to switch wireless providers. Seeing as the deal is estimated to take a year to finalize however, access won’t be immediate. As T-Mobile explains in the mandatory set of FAQs released after news of the deal hit the press: “T-Mobile USA remains an independent company. The acquisition is expected to be completed in approximately 12 months. We do not offer the iPhone. We offer cutting edge devices like the Samsung Galaxy S 4G and coming soon our new Sidekick 4G.”

4. Customers will have fewer phones choices overall
While T-Mobile customers should expect to have access to a greater number of phones, the overall number of handsets available to US customers will likely shrink. Rather than continue to offer T-Mobile’s entire phone lineup, AT&T will probably pick a smattering of the most desirable devices to add to its arsenal. (Which phones AT&T chooses depends on how it handles its array of 3G/4G technology choices.)

Also, as the fourth largest carrier, T-Mobile could take chances on untested handsets, like the original Android smartphone, the G1. T-Mobile also allows customers to use unlocked phones, and even offers up unlock codes. AT&T’s careful, lumbering ways will probably prevent all of this, which adds up to less choice for mobile users, not more.

5. Billing cycle changes and higher fees for T-Mobile users
Right now AT&T charges customers for the upcoming month, whereas T-Mobile charges for the month that just passed. Since the AT&T method gets the money in the bank sooner, expect that option to prevail. Also, T-Mobile customers pay less in fees than AT&T customers. Those fees, we believe, will go up.

6. No more “unlimited” data plans
T-Mobile still offers unlimited data plans, while AT&T does not. Or, rather, T-Mobile’s “unlimited” plan give users the ability to use up to 5GB-per-month, for $30. Data usage past the 5GB threshold is throttled. AT&T’s data plans cap out at 2GB, with extra charges for additional data usage. Expect AT&T to offer its 34 million new subscribers the latter.

7. T-Mobile customers get rollover minutes
Despite its reputation as the “worst carrier” in the US, AT&T does have at least one attractive feature: rollover minutes. T-Mobile users, whose minutes currently expire at the end of the billing cycle, can now look forward to the endless build-up of minutes that AT&T subscribers currently enjoy.

Obviously, these will likely not be the only changes. And the exact details should begin to become more clear as the deal reaches its close. In addition to the effects felt by customers directly, this merger stands to significantly alter the US mobile phone industry for years to come. For now, however, the fate of America’s wireless industry rests on the federal government, which must decide whether or not all this is a good idea.