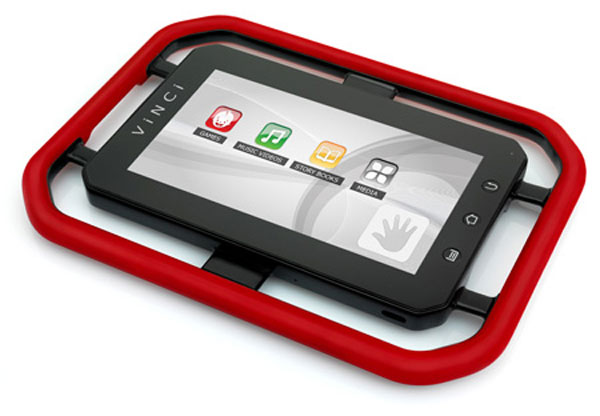 With the way things are going, it can’t be too long before we see the unveiling of a curved tablet with straps attached, designed to fit snugly around the protruding bulge of an expectant mother. Such a device would be pre-loaded with an assortment of educational apps designed to give little Johnny or Jane a brainful of useful knowledge prior to their arrival in the big wide world.

You see, according to an LA Times report, Amazon has started taking pre-orders for the Vinci tablet, a 7-inch device aimed at babies from zero to four years of age. Newborns tend to do little more than babble and bowel movements, but now we’re supposed to believe they’ll be able to engage with a selection of games, books and music videos. Maybe they will.

The tablet incorporates a special soft-cornered handle, making it easy for those tiny little hands to grip. It has no Wi-Fi facility, so parents needn’t worry about their six-month-old toddler – who won’t know the value of money at that age (unless an app teaches them) – emptying their bank account by filling up the hard drive with costly downloads.

Under the hood, Vinci is likely to impress many. The Android-based device uses a Cortex A8 processor, has 4GB storage space and a 3-megapixel camera. It also has a slot for a MicroSD card, a built-in speaker and a built-in microphone.

Vinci’s website explains that the tablet was “invented by our founder, Dr. Dan D. Yang, who is a mother and world-renowned telecom entrepreneur.” Yang came up with the idea for a baby-focused tablet when she noticed how much her young daughter liked to play with her smartphone and computer.

There’s no doubt that a great deal of thought has gone into the design of the Vinci tablet, but it might leave you wondering – whatever happened to those more traditional kinds of toys. Rattle, anyone?

How to replace lost or broken AirPods, AirPods Pro, or cases