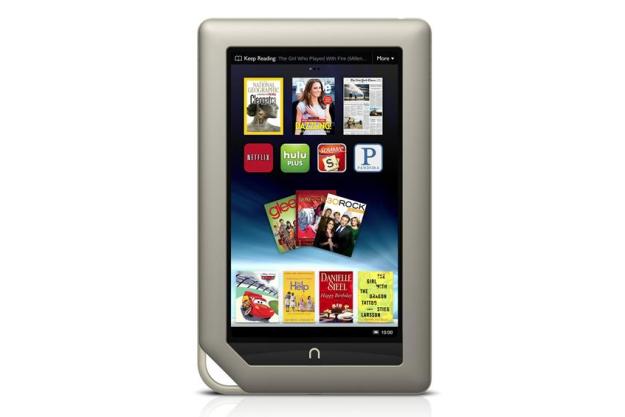 “If you're looking for a tablet hand-built around reading, but want access to some extra features like email, kids books, magazines, comic books, a Web browser, apps, Hulu, Netflix, Pandora, and some games, then this is for you.”

The Barnes & Noble Nook Tablet is definitely not an e-reader, but it’s also not a proper tablet. Like the Kindle Fire, it’s in a bit of a class of its own. Still, this reading-focused tablet is likely the third best-selling tablet out there for good reason: It’s cheap. But is it worth the $200 to $250? Find out in our full review below.

How it looks and feels

The Nook Tablet is one of the better looking 7-inch devices on the market, but we’re not sure if that’s a huge compliment or just a statement of how weak the competition is today. Regardless, it definitely has its own distinct design: a sandwich of gray surrounding lighter silver tubing. It also has that distinct “n” where the iPad home button would be and a giant lanyard hole in the lower left corner, which gives at least one corner of the tablet a Battlestar Galactica flair.

We’re not huge fans of the 7-inch form factor (it’s just a bit too small), but this is certainly one of the more comfortable tiny tablets. The front and back of the Nook Tablet have an ever-so-subtle rubbery, almost suede-like feel to them, which makes it quite comfortable to hold, and the screen is easy to touch and manipulate. The volume buttons and power are a bit hard to find and locate if you have a bad memory or are operating in the dark, but once you do find them, they do their job just fine.

There are really only two negative points to the Nook Tablet’s design: The rear speaker gets muffled if the device is set down on a soft surface, and the paint eventually begins to wear off the corners and edges of the front panel of the Nook, which end up looking quite bronzed after a while. It’s not a horrible look, but definitely not the look you paid for.

How well it works

The Nook runs on a modified version of Android, but it’s been customized so heavily that it’s hardly recognizable. If you’re hoping to use Gmail, Maps, Places, Calendar, or other Google-specific services, let us just crush your dreams right now: The Nook, like the Kindle Fire, does not connect to Google services. They both run , but only we geeks even know that. The Nook has its own proprietary app store, book store, newsstand, and magazine subscription service. If you want music, you’ll have to settle for Pandora. If you want movies or TV shows, Netflix and Hulu are your only great options. More than the Kindle Fire even, the Nook’s entire interface seems centered around e-books.

The bright color screen works great for magazines, comics, and children’s books, but all of the other tablet features are mostly a bonus. Sure, you can load some MP3s on the Nook, browse the Web, and check your email, but at all times there will be a little button in the left to let you jump right back into The Hobbit or whatever book you happen to be reading — a great feature. When you’re on the home screen (accessible by pressing the ‘n’ button), another button up top gives you even easier access to return to reading.

Don’t get us wrong, there are thousands of apps for the Nook and it can be used for many multimedia, tablet-like purposes, but you cannot compare its app library to the iPad. Apple just wins. The Nook Tablet is for someone who, above all else, wants a tablet for reading. If you keep that in mind, the interface and features of the Nook Tablet are quite impressive, as is its price.

Technical specs aren’t for everyone, but since some of you are dying to know, we’ll lay out the basics. The Nook Tablet has two variations: the original $250 16GB version (this is the one we reviewed) and a $200 8GB version which also has half the RAM (512MB). The 16GB version has a 1GHz dual-core TI OMAP 4 processor, 1GB of , 16GB of internal storage, a microphone for interactive books, one external speaker, runs on 2.3 (Gingerbread), and has a 1024 x 600 pixel 7-inch IPS display which is quite vivid and bright compared to other tablets. It also has a microSD slot if you want to add more memory.

We find the 16GB Nook Tablet to be superior to the Kindle Fire in performance (we’ll get more into this later), but these advantages are mostly lost if you take the $50 savings and buy the cheaper 8GB model, because of the reduction.

Finally, like the Kindle Fire, the Nook Tablet has no cameras on the front or back.

How it compares to Kindle Fire

As we just said in the specs section, the 16GB $250 Nook Tablet runs much faster than the Kindle Fire, but those advantages are mostly lost in the 8GB version. In addition, both tablets lack cameras or Bluetooth support.

Neither of these tablets have robust app stores, and neither can connect up to any Google services. But the Nook Tablet is better optimized to favor reading. If you’re more interested in buying content – like MP3s, movies, or TV shows – then the Kindle Fire is more for you. The Nook Tablet has decent access to many streaming services like Pandora, Grooveshark, Rhapsody, MOG, Netflix, and Hulu, but Barnes & Noble doesn’t operate its own music or movie download service (for better and worse). As with the Kindle Fire, app selection is a bit limited beyond the big services and games. Amazon’s app store does seem to have a better selection of games. Both of these app stores charge a bit more for content than you will find on the Google Play store, which is available on any standard tablet.

Did we mention that all tablets with Google services can also download the Nook and Kindle apps for book reading? Something to consider before committing to one of these tablets just because you want to read.

As far as actual book selection, both stores seem fairly even, but Barnes & Noble boasts a bigger store overall. The Nook has access to more than 2.5 million books, thanks to a partnership with Google, while Amazon boasts slightly more than 1 million e-books. Both tablets require Wi-Fi to access the Internet.

Neither tablet has a price advantage, as both sell for $200, but if you care about performance, we recommend you bone up and pay the extra $50 to get the 16GB Nook Tablet.

Here is a comparison of specs between the two tablets, just in case we missed something.

Amazon boasts 8 hours of battery life for the Kindle Fire without Wi-Fi turned on. Ever the competitor, Barnes & Noble claims to get 9 hours of battery life with Wi-Fi and 11.5 hours of “reading” time, assuming you turn off Wi-Fi. We don’t perform strict battery rundown tests, but our experience with the Nook’s battery has been fairly positive. It appears to last at least 9 hours, a bit more than the Kindle Fire. We don’t have any big complaints here, but if you want impressive battery life, getting an E-Ink e-reader is still the way to go. The Nook Simple Touch with GlowLight (the screen lights up) will get as much as a month of battery life on a single charge.

If you’re looking for a tablet hand-built around reading, but want access to some extra features like email, kids books, magazines, comic books, a Web browser, apps, Hulu, Netflix, Pandora, and some games, then this is for you. The Nook Tablet 16GB is a much better tablet than the Nook Color and outshines the Kindle Fire in performance. For $250, you currently can’t do better. Things always change, but right now, Barnes & Noble’s Nook Tablet is still a compelling, competitive e-reader tablet.

Topics
Video-editing app LumaFusion to get a Galaxy Tab S8 launch
Wi-Fi not working? Here’s how to fix the most common problems
The best phones for kids in 2023
The best grocery list apps for iPhone and Android in 2023
Samsung Galaxy S23: release date, specs, price, rumors, and news
Yes, we really are completely spoiling the OnePlus 11 and Buds Pro 2 launch
The best rugged smartphones for 2023
The best iPhone games in 2023: 31 games you need to play right now
This Apple leaker just revealed tons of changes for iOS 17 and iPhone 15
Beats Studio 3 headphones are $120 off today at Amazon
How to cheat in Words With Friends
Trading in your iPhone with Apple? You’ll get less than yesterday
The best QR code scanning apps for iPhone and Android in 2023