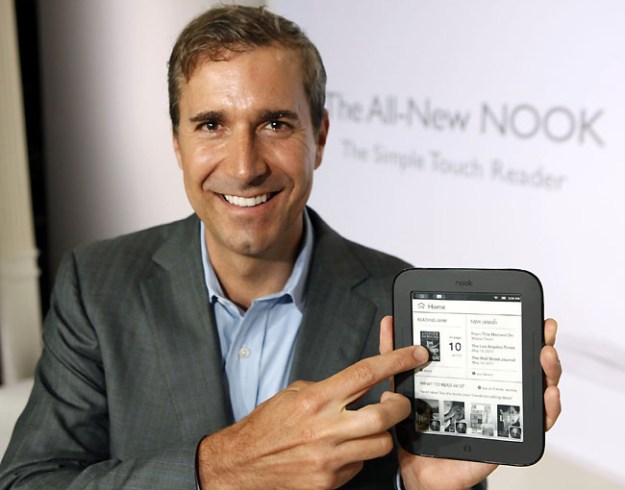 William Lynch (pictured) resigned from his position as chief executive of Barnes & Noble on Monday after failing to make a success of the bookseller’s move into the digital market with its Nook tablets and e-readers.

Battling against established giants in the space such as Amazon, Google and Apple, Lynch’s mission, which he accepted three years ago, was always going to be an uphill battle.

Just a couple of weeks ago, the New York-based company announced grim financial results for its latest quarter that saw losses with its Nook digital business double to 34 percent, destroying profits from its bookstores. At the same time, Barnes & Noble said it would no longer manufacture its own range of tablets, including the (heavily discounted) Nook HD and Nook HD+.

Determined not to give up on the digital space just yet but looking for ways to cut costs, the company said it has plans to launch a new tablet “co-branded with yet-to-be-announced third-party manufacturers of consumer electronics products.” It’ll also continue to sell its Simple Touch and GlowLight e-readers.

While its Nook Book Store continues to trade, the bookseller has also said it’s currently developing a number of Nook apps for various mobile platforms.

The company has not named a replacement for Lynch. Instead, Huseby, Mitchell Klipper (CEO of the retail division), and Max Roberts (CEO of the college division) will for the time being report directly to Leonard Riggio, executive chairman of Barnes & Noble’s.

Early reviews for Barnes & Noble mobile hardware were promising, but faced with increasing competition from the likes of Amazon and Google with their competitively priced Kindle Fire and Nexus tablets, the company has found it increasingly difficult to compete. Lynch was never going to have it easy, and unless the company changes tack, neither will his eventual replacement.