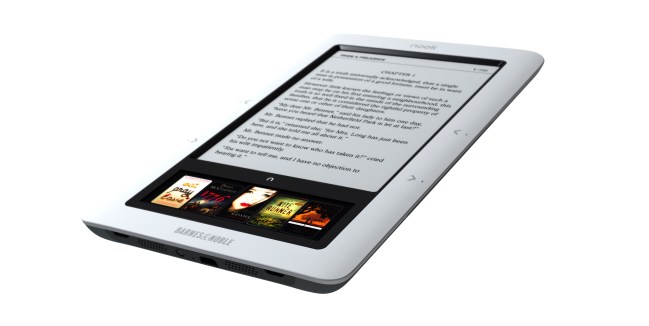 With news earlier today that owners of Amazon’s Kindle e-reader are now buying more digital downloads for their device than hardback and paperback books combined, it’s little wonder that bookseller Barnes & Noble wants a piece of the pie.

On Tuesday, the New York-based company is expected to launch a new e-reader to rival the Kindle and other similar devices.

It’s no coincidence that the launch will happen in the same week when the annual booksellers’ convention is in town. That event brings together publishers and retailers from around the world, so Barnes & Noble will have a captivated audience right on its doorstep when it unveils its new device. The introduction of the new e-reader is an indication of how serious the company is about getting deeper into the digital download market.

Talking to the Wall Street Journal, the company’s chief executive, William Lynch, said, “We’ve gone from zero to north of 25% of the digital books market since July 2009.” He continued: “We’ve also sold more than 1.5 million magazine subscription orders and single copy sales on the Nook newsstand.”

According to Lynch, Barnes & Noble have been looking to exploit gaps in the e-reader market. “We launched Nook Color last October because there wasn’t a digital product that let people read everything, including children’s books, in full color,” he said.

Another area of growth for the company is the self-publishing market. The old adage that “everyone has at least one book in them” has allowed people with access to a computer to get that (digital) book out there – and Barnes & Noble have been helping would-be authors to do just that since October last year with the help of its PubIt! platform.

Speaking to the WSJ, James McQuivey, an analyst with Forrester Research, predicted that by the end of 2011, 25 million adults will be using e-readers compared with nine million at the end of 2009. “The amount of money readers spend on e-books has risen more than four-fold since 2009, growing from $300 million to more than $1.3 billion by year-end 2011,” he said. Barnes & Noble will certainly be hoping that its new e-reader will be used by many of those 25 million people, though it is of course up against some tough competition with Amazon’s Kindle offerings and Apple’s iPad.

Barnes & Noble already has two devices on which digital books can be read – the Nook Color tablet and the Nook e-reader. Last year, the bookseller hailed Nook Color as the “biggest bestseller” in the company’s history. The specs of the new device are not yet known.