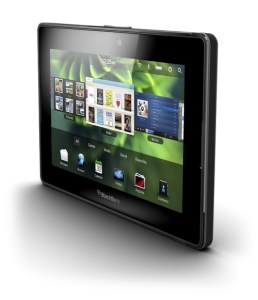 BlackBerry developer Research In Motion has arguably been the hardest-hit following the arrival of the iPhone and the growth in the global smartphone market that followed. Still, if you are going to bet on any company to successfully compete with Apple in this post-iPad world, RIM is your best choice. The tech firm is still a dominating presence in the business world, and that’s the angle it is taking with its soon-to-arrive PlayBook tablet, which is now officially priced, dated and open for pre-orders.

Best Buy and Future Shop are the first retailers to get the tablet, but RIM further confirms that you’ll eventually be able to find it pretty much anywhere that deals in tech goods, including Staples, Office Depot and Radio Shack. The PlayBook will also be available from three of the top four wireless providers in the country, AT&T, Sprint and Verizon. T-Mobile is notably absent from the list, though that won’t exactly matter in another 12 months.

The 7-inch PlayBook is both priced and built to compete with Apple’s newly released iPad 2. While the device won’t have access to any 3G wireless data plans, it sports a 1 GHz Cortex-A9 dual-core processor (read: powerful), 1 GB of RAM, 1080p HDMI output, Wi-Fi and Bluetooth, front- and rear-facing cameras (3MP and 5MP, respectively) all of the usual support for various audio and video formats, built-in GPS, an accelerometer, a gyroscope, a compass and browser support for both HTML5 and Flash.