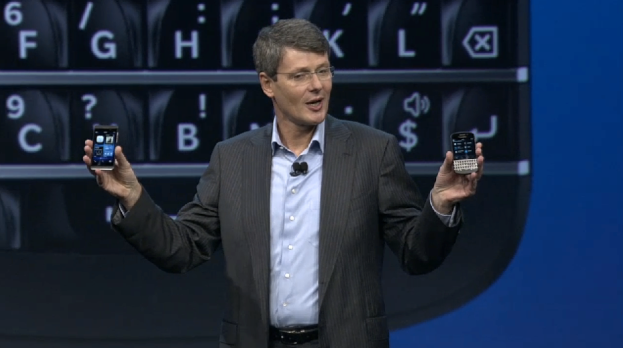 The dust has now cleared following BlackBerry’s successful BlackBerry 10 launch, giving us all the chance to examine the new phones, compare them to the competition, and have a good read of all the hands-on reports. Perhaps due to it being the first to go on sale, or because it’s the cool full touchscreen device, it’s the Z10 that has attracted the most attention. But that’s no good.

The Z10 appears to be a solid phone, but it’s a little bit faceless and could easily get lost among the Apple, Samsung, Motorola, Google, and HTC smartphones of this world. That’s OK though. BlackBerry has a secret weapon: the unassuming, late-arriving BlackBerry Q10. Not convinced? Here’s a few reasons why if anything is going to stop (or at least significantly slow) BlackBerry’s descent into oblivion, it’s the Q10.

We’re always calling for smartphones to be different or to stand out from the crowd, and bizarrely as it sounds for a phone which could be viewed as staid, the QWERTY Q10 is the different phone we’ve all been harping on about. Here are some of the current choices for those who want a physical keyboard on which to type: The Samsung Galaxy Chat, with its single-core 850MHz processor, the Nokia Asha 302 which runs Series 40, or the HTC ChaCha, which is now two-years old (and has one of the world’s stupidest names for a smartphone).

Using one of these just to enjoy a physical keyboard would mean quite a sacrifice, as would returning to BlackBerry’s Curve or Bold; which is something we know nobody wants to do, as otherwise the firm wouldn’t be suffering. “We know there are a lot of physical keyboard lovers out there,” said CEO Thorsten Heins during the launch event, and luckily for BlackBerry, they’ve got almost nowhere else to go.

The Q10 looks familiar, but it’s all-new inside

By choosing the Q10, the physical keyboard – which just happens to be made by the QWERTY masters, don’t forget – is only part of the package. It’s accompanied by a dual-core, 1.5GHz processor and 2GB of RAM, a 3.1-inch Super AMOLED touchscreen with a 720 x 720 pixel resolution, an 8-megapixel camera and 16GB of storage space. As you can see from the above examples, that’s light years ahead of anything else on the market.

Anyone put off by the Q10 because of the unholy mishmash of touch and keyboard that was the last Bold 9900, should remember BlackBerry 10 has been designed to be operated by touch, and there’s no trackpad or any other way to bypass the touchscreen, leaving the keyboard only for typing messages. The Q10 runs the same version of BlackBerry 10 as the Z10, so the user experience won’t be diluted down or crippled by the presence of a keyboard, plus the design is a modern interpretation of the Bold, complete with a glass weave rear cover to funk it up a bit. If you’ve been holding out for a QWERTY phone, or have been struggling on with a Bold or, shudder, a Curve; the Q10 must surely be at the top of your shopping list.

Is the Q10 BlackBerry’s dark horse?

So, that’s all the physical keyboard faithful taken care of, but how difficult is it going to be to draw in users from iOS and Android? Very difficult is the answer, but then it’s the Z10 that’s aimed at that crowd, while the Q10 will fish in the pool of those yet to make the jump from a feature phone like the Asha. We shouldn’t forget how hard BlackBerry is pushing the new software in developing markets – China will get BlackBerry 10 before the U.S., remember – where there are still a lot of users in this situation.

If the Q10 is BlackBerry’s unique product, why the delay in its launch? The Q10 isn’t expected to go on sale until April and previously, Thorsten Heins said this was primarily due to carrier testing, but it also comes down to marketing and public perception. Everything is about the touchscreen these days, and if BlackBerry had sent BB 10 out on the Q10 instead of the Z10, it would have been accused of not staying with the times. No, it’s far better to get the Z10 out to push BlackBerry 10 into the public’s consciousness, before getting on with promoting the dark horse Q10.

In an interview with Bloomberg late last year, Heins estimated a three to one sales split in favor of the Z10 following launch. While it’ll almost certainly be this way to start, we wonder how those figures will look 8 to 12 months from now; as all those who abandoned the hateful BlackBerry OS 7 hardware for a touchscreen phone, suddenly remember how much they love a physical QWERTY keyboard, and realize there’s a decent one on sale again. The Q10 could be a real surprise. We think it has a lot of potential.