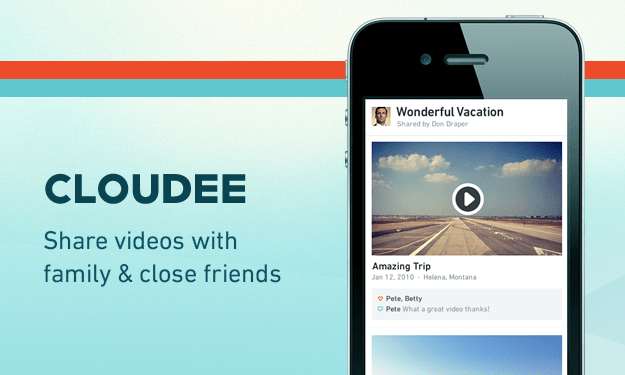 A surprising contender has introduced itself to the thickening social video market. Boxee, makers of the Boxee Box, have launched Cloudee, a video saving and sharing app. Cloudee is mobile-first, but users can access content via PC as well.

At the moment, Cloudee is available for iPhone for free (it will eventually be a paid app) and comes with unlimited storage. Currently, however, it’s restricting new users. If you download the app, you’ll be able to connect Cloudee with your Facebook account, but then will see the message at right, explaining you’re on a waiting list.

We are anything but wanting for another social video app. The last year has been brimming with new additions, like Viddy, Socialcam, and Chill. They all fit within different niches (creating your own content as well as a community around it versus sharing out viral videos) and have experienced various levels of success. But a handful of these new apps have been christened as racing for the “Instagram of video” title – whether they like it or not.

So while Cloudee is certainly entering a crowded market and could easily fall victim to claims it’s jumping on the bandwagon, there are a few things it could leverage over the competition. For one, the Boxee service. The company is seeing beyond your computer, smartphone, and tablet screens, and wants to help more seamlessly connect your own video content to your TV. “For a while now, it’s been painful to get our personal videos to the TV screen – our Road Trips, Boxee Meetups, family videos with our kids, concerts and the occasional weirdness on NYC streets,” the Boxee team writes on its blog. “Some of these videos were on our phones, others on our laptop or network storage, and the ones we really wanted to see were always taken by our friends.”

“This new iPhone app lets users upload videos to Cloudee, organize them into collections and share them with their family and close friends. During the beta period the service is free, but we will later release a paid version with unlimited video storage in the cloud, which you will be able to access from your Boxee Box and any browser.”

Generally speaking, most of what currently falls in the social videos app category is part of the second screen experience. Sure, you could access them via connected TVs or a streaming console’s Facebook app, but it’s not a native experience. And there’s been something of a disconnect between user-shot video and the TV: YouTube’s been trying to gain some footing here; and while it’s probably one of the best efforts available at the moment, it’s still a process of trial and error.

Cloudee isn’t trying to create a public video community that revolves around Facebook or the smartphone. Instead, it’s spinning itself as a way to help us easily, seamlessly, put video where it belongs: on the TV. Of course, the option for mobile or desktop consumption is there, but the connection to the TV and the Boxee service is what distinguishes Cloudee, as does the fact that it errs on the side of privacy with a focus on controlled sharing. And that integration with the Boxee Box is forthcoming, but will be available in the near future — I’m told before the beta is over.

“We believe the cloud will play an important role in the future of TV and plan to continue to develop in that space,” Boxee’s marketing communications manager Liz Dellheim tells me. “Cloudee will become an integral part of the Boxee experience and we hope every Boxee user will be an active and engaged user of Cloudee as well, using it to store and share all of their videos (rather than keep them on drives and computers as they do today).”

The launch is interesting for a handful of reasons, but two in particular come to mind: For starters, this suggests that Boxee is becoming increasingly interested in the cloud, and seeing this as a better or complementary means for its streaming service. Second, Cloudee is maybe one of the most encouraging video-meets-social offerings to date.

For the time being, Boxee doesn’t want you to consider Cloudee and backup service for your video projects – it is a sharing service. Eventually, Cloudee will have a subscription, multi-tier service that will tie in with the Boxee Box. For now, pricing and storage limits are unknown, but it’s safe to assume there will be a “no storage restrictions” option.