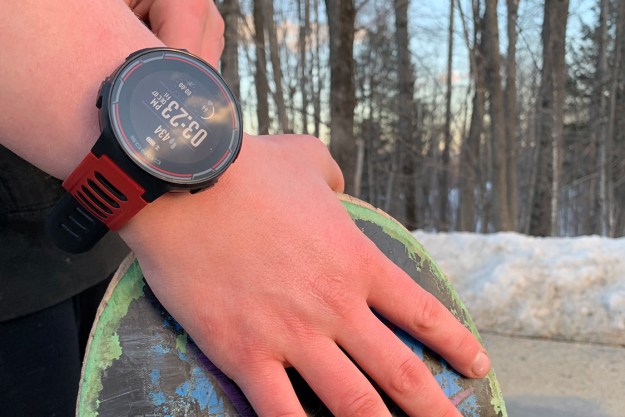 “With multi-sport tracking, the Coros Pace is perfect for triathletes.”

The Coros Pace is a fitness watch that attempts to fill the niche between high-end multisport GPS watches like the Garmin Fenix 5 Plus series and consumer-oriented trackers like the Fitbit Versa. The Pace falls squarely in between the two both in functions and features, but it’s not going to be a tracker for everyone. It’s targeted at a niche audience of people training for triathlons, and considering its price, the Pace has a lot going for it.

The Coros Pace looks like it rolled off Garmin’s production line. Sure, it has with four buttons instead of five, but if the Coros branding on the watch wasn’t present, you could easily mistake the watch for Garmin’s Forerunner 735XT or the Forerunner 235. It even uses a similar clamp-style charger.

That doesn’t mean it looks bad. On the contrary, we think Coros nailed comfort and design. It’s sporty appearance suits the gym — though you might want something classier for the office — and the screen is big enough for a quick glance at metrics while exercising, but not so big that it becomes uncomfortable. It’s also lightweight thanks to Coros’ choice of materials: Plastic for the case, and a silicone band that is soft to the touch and ventilated to minimize sweat.

While it is plastic, the Pace has a solid build quality much like the Garmin watches it mimics. The housing is durable and the glass face is resistant to scratches. The buttons require just the right amount of effort to press so you don’t have to worry about accidentally starting or stopping a workout. The design and fit of the Pace is on par with the competition — equally as comfortable and almost as durable.

The Coros Pace is designed for triathletes and it shows. The three available sport profiles include running (indoor and outdoor), swimming (indoor and open water) and biking (indoor and outdoor). There is an “other” category, but the watch clearly is geared for those competing in triathlons. Coros may not offer every activity under the sun like some of its competitors, but it excels with the activities it supports. GPS accuracy was spot on and the heart rate monitor compared favorably to Garmin and Suunto’s top watches, the Fenix 5X Plus and the Suunto 9.

There was some variability between the watches we used for comparison testing. The Suunto 9 and Coros Pace almost always measured runs with slightly more mileage and slightly lower heart rate than Garmin watches. The differences were small — 10 to 20 beats per minute and less than a quarter of a mile — but worth mentioning.

Triathlon mode allows you to switch between different workout modes in the middle of a training session.

When it came to open water swimming, we preferred the Coros over the Garmin and Suunto, both of which struggled to log an accurate distance and GPS track in the water. The Coros uses GPS, GLONASS, BDS and allows you to switch between three GPS modes (GPS, GPS+BDS, GPS+GLONASS) to improve accuracy. We primarily used GPS+GLONASS and never struggled to get a lock. GPS stayed consistent on long runs, even those in the woods.

By far, our favorite feature on the Coros Pace was the triathlon mode which tracks all three sports – run, swim and bike – in one session.  It allows you to switch between different workout modes in the middle of a training session and view the total time for all workouts. It’s the ultimate tool if you are training for a triathlon.

Though it is great at tracking workouts, the Coros Pace is limited in its health and wellness features. The Coros Pace monitors daily steps, heart rate at 10-minute intervals, and calories burned. It does mash up those numbers to provide a fitness index, which is comparable to the VO2 max, as well as a stamina level which ranks activity level on a sliding scale that ranges from beginner to elite. These are helpful to gauge fitness level, but there is no option to add in food you eat, water you drink, or log weight. The metrics are targeted towards the athlete who wants to focus solely on performance.

There is also now sleep tracking, so you can track your shut-eye and monitor how it affects your performance. It was added in December 2018 so you may have to update your watch if you purchased the Pace with an earlier firmware version. Enabling sleep tracking requires no user intervention. Just wear your watch to bed and the sleep data will appear on your dashboard.

Like most smartwatches, the Coros Pace connects to your smartphone and allows you to view incoming notifications. The text is easy to read on the 240 x 240 screen resolution, and you can scroll to read more than the first few words.

It’s promising to see continuous commitment to the product, months after it launched.

It’s just as easy to dismiss notifications on the watch, and answer or reject phone calls. Syncing between the phone and the watch is almost instantaneous, with the watch buzzing almost simultaneously. The Pace syncs to third-party services like Strava, but there is no support for apps on the device, a feature offered now on most smartwatches.

Coros is a relative newcomer to the fitness tracker space, having made its start in smart helmets for cyclists. It has its work cut out for it compared to the likes of Garmin or Fitbit, but the company is up to the task. When we first received the Pace earlier this year, it was a barebones watch with several notable missing features like interval training and support for ANT+ devices. This dearth didn’t last very long, though, as we’d get updates every month adding new features and improving existing ones. These weren’t little features that were added or improved, but big ones like indoor cycling support, customizable data screens, and interval training.

It’s promising to see a continuous commitment to the product, months after it launched, though these features should really have been available at launch.

Battery life is where the Pace shines. The watch lasted almost a full day when continuously tracking in full GPS mode as compared to the half-day provided by our Garmin Forerunner 235 watch.

On a daily basis, each hour-long run only drained the battery by 5 percentage points. This boost in efficiency comes not from a huge battery in a bulky casing, but software that is optimized for fitness tracking and is not bloated by extra features. When used in watch mode only, the Coros Pace lasted almost a month. We went so long between charges that we actually lost the charging cable. Oops.

The $299 Coros Pace is available now online from Coros and Amazon. Coros’ warranty will let you repair manufacturer defects from its fitness products two years from the original date of purchase.

The Coros Pace has all the core metrics you need to improve your running, swimming and biking without any extras that you don’t need. It’s this singular focus and an affordable price tag that sets the Pace apart from other multi-sport trackers. It doesn’t try to be one watch for everyone, but a watch dedicated to one sport — the triathlon. If you are a runner who bikes or a biker who swims, the Pace is the watch for you.

Feature-wise, the Garmin Forerunner 645 gives the Coros Pace a run for the money. The Forerunner 645 has the same size and screen resolution, a barometric altimeter, and the same core sensors as the Pace. But at $399, the Forerunner 645 is a good deal more expensive than the Pace, though the extra cash also offers a stainless steel case, multisport support, and access to Garmin’s app repository.

The Vivoactive 3 Music is another excellent watch with a similar feature set and pricing as the Pace, but with a stronger focus on health and extras including music.

But if you’re a triathlete, the Coros Pace is one of the few watches with a dedicated triathlon sports mode that lets you easily transition from one sport to the next.

The Coros Pace has a lightweight plastic build, but it has held up well in our testing. We used it hiking, biking and other everyday activities without issue for several months. The band and housing are in excellent shape, but the screen has a few light scratches consistent with normal use. We expect to get at least two to three years out of the watch.

Yes, but only if you are a triathlete. The Coros Pace is great for people that want to track running, biking, and swimming in one session. Athletes who practice a variety of sports or want other features like music or weight tracking should look elsewhere.