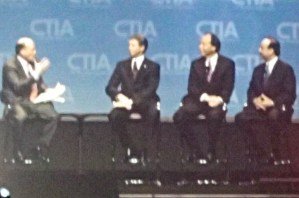 News of AT&T’s purchase of T-Mobile is rippling through CTIA. Though the mood was generally light at today’s carrier forum, moderator Jim Cramer (Mad Money) didn’t hesitate to ask the heads of Sprint, AT&T Mobility, and Verizon Wireless some tough questions about the costs of wireless access, the wireless spectrum, and the impact the purchase of T-Mobile will have on innovation in the U.S. market.

Noticeably, T-Mobile was absent from the carrier lineup. When asked about the purchase of T-Mobile, AT&T Mobility’s Ralph de la Vega was pretty brief, but defended the carrier’s $39 billion decision, saying that the added wireless spectrum that T-Mobile owns as well as the new customers and added infrastructure will help AT&T bring 4G services to the market quicker. In a witty retort, Sprint’s Dan Hesse said “wait, I thought you and T-Mobile already had 4G,” commenting on the claim T-Mobile and AT&T have been making that their HSPA+ networks are actually 4G. Hesse was not shy about his discomfort with the deal, reiterating claims that it basically gives Verizon and AT&T an 80 percent market share and hurts the competitive growth of the industry in the long run. Verizon’s Dan Gaul was mostly neutral on the matter, saying that Verizon is monitoring the situation closely, but doesn’t necessarily think it is a bad or good thing. Verizon believes it is in a very competitive position.

Toward the end of the discussion, Cramer asked the carriers whether a series of companies were friends or foes. AT&T claimed that Facebook and Twitter are both a friend to it and Verizon’s Gaul believes Netflix is a friend, but has no interest in owning content companies. Finally, Hesse (Sprint) said that he hopes the Nokia/Microsoft Windows Phone partnership is successful because a fourth operating system would make for a healthier operating system market. Overall, throughout the morning Hesse painted himself as the most reasonable and likable CEO of the bunch, getting quite a few laughs and cheers from the crowd. Speaking about metered usage, Hesse said Sprint will stick with its unlimited plans for now: “…if you look at broadband at home, it’s not metered. We look at tonnage and usage immensely. We try to focus around simplicity and value. Consumers will pay a premium for simplicity,” said the CEO.

Other topics discussed included the tragic events in Japan, the need for more wireless spectrum, the growth of video, Jim Cramer’s children, and the iPhone launch on Verizon (AT&T has “no comment” on how it impacted sales).

Video-editing app LumaFusion to get a Galaxy Tab S8 launch
T-Mobile promises free 5G for first responders if Sprint merger goes through
Sprint follows T-Mobile’s lead with new unlimited data plan for seniors
AT&T and Verizon’s speeds start to recover after launch of unlimited data
T-Mobile is faster than Sprint, Verizon, and AT&T, according to Oookla Speedtest
Nothing teases its next wireless earbuds with photos of a lipstick-like case
How to see which apps are draining your iPhone’s battery life
The iPhone 14 gets a stunning transparent back with this new mod
Have a Fitbit? You’ll soon be forced to link a Google account
Samsung Galaxy S23 leak teases a disappointing charging spec
The iPhone 14’s car crash detection might be a little too good
Best Apple deals and sales for September 2022
Make your fortune with the best stock-trading apps for iOS and Android