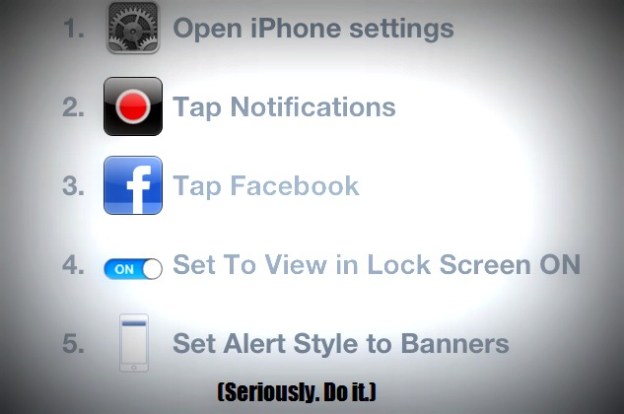 It’s no secret that Facebook has largely refocused its efforts on mobile development. Look no further than the features developed only for phones and tablets – not seeing any Camera or Nearby functionality for the desktop, are we? Or observe the platform’s dogmatic approach to getting its engineers to think of it like a mobile-first (or as the case may be, only) network to prove this.

But now, Facebook’s getting pushy about it – literally. The social network is now alerting users who have their Facebook push notifications turned off to go ahead and turn them back on.

The alert is even followed by this handy guide walking you through the process.

Is Facebook feeling the pressure from the mobile-only market? The platform has sent a pretty clear message to mobile apps that want to piggyback off its network – and that message is “stay away.” A handful of rising apps have lost their access to Facebook recently as it continues to try and find its mobile footing.

This anti-competitive stance (or ultracompetitive, depending how you look at it), combined with a recent push by Facebook to send messages to our smartphones reminding us it … uh … exists, are making it look desperate.

Facebook is trying to recreate the kind of engagement that apps like WhatsApp, Instagram, and Snapchat have all been able to corner with no desktop presence (with the exception of Instagram’s recent browser-based launches). It wants to be the app you immediately pull up and interact with when you grab your phone. But that sort of user behavior is difficult to manufacture, especially working in reverse; we’ve already been very conditioned in our Facebook use. There are Facebook users out there who are nearing their 10-year anniversaries with the site – that’s a lot of history to rewrite and a lot of habits to reform (or move to a phone).

It’s sure to be an uphill battle to get users who’ve abandoned push to get on board with the auto-updates from Facebook. Push notifications have been abused in the past, and as much as developers are trying to win us back, we’ve been scarred by their past, very intrusive ways. Using push notifications to tell us to use push notifications isn’t a terribly encouraging method.

The road from browser-based to mobile-first, though paved with good intentions, clearly remains a struggle for Facebook.

The Kindle Paperwhite just got a rare discount