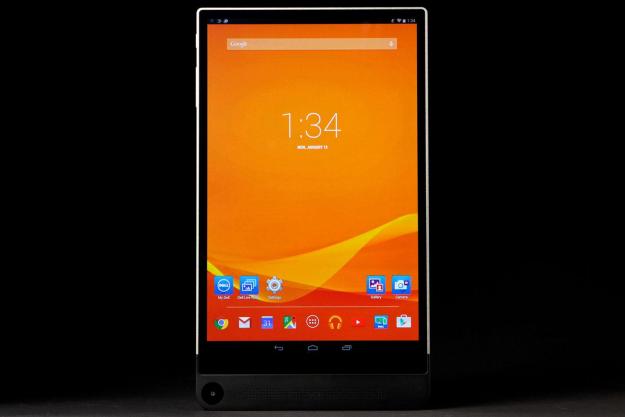 “Dell’s latest Venue easily lays claim to the title of best Android tablet, and even challenges the iPad Mini.”

When you think of high-end tablets, your mind probably jumps to the iPad first. Most Android tablets target the low end, with generic, plastic-backed slates for $100 to $200. Those dreaming of a powerful Android with a premium design were left with shockingly few options — up until now.

Dell’s attractive Venue 8 7000 series tablet all-but matches the power of the Nexus 9, with the sharp looks of an iPad Mini. The new Venue also showcases Intel’s RealSense depth-measuring camera software and a zippy Atom processor. The end result is a device that can easily lay claim to the title of best Android tablet — and even challenges the iPad Mini.

It’s the most beautiful Android tablet you’ll ever hold

Typically, Android tablets look as cheap as they feel, but that’s definitely not the case with the Dell Venue 8 7840. It’s hands-down the most beautiful tablet I’ve ever held. At first glance, it looks and feels like a Space Gray iPad Mini, because of its machined aluminum body, svelte profile, and gorgeous screen. Then you notice its incredibly thin bezels, the speaker grill, and a nice big camera in the bottom left corner. That’s when you know you’re looking at something different.

The Venue 8 7840 measures just 6 millimeters thin, making it the thinnest tablet around — it’s even 0.1 millimeters thinner than the iPad Air 2. A few key buttons and ports sit along the edges of the tablet, including a power button, volume rocker, Micro USB, headphone jack, and MicroSD card slot. To top it all off, this gorgeous tablet weighs only 306 grams.

Although there’s virtually no empty black space at the top of the tablet, there’s a wider ledge on its bottom half, which wraps around onto the back of the device. That bottom corner isn’t aluminum, and instead has the glossy look of the glass implants on the back of the iPhone 5S. That’s where Dell popped in an extra depth-sensing camera.

Needless to say, the Venue 8 7840 leaves a lasting impression, which isn’t something most Android tablets can say. It stands out from the pack of plastic slates and delivers a truly distinctive design. The Venue 8 7840 is the first truly high-end tablet. Looks aren’t everything, of course, but this tablet gives the iPad Mini a run for its money in terms of power, too.

It also portrays colors with far more accuracy than its closest Android competitor, the Galaxy Tab S. Samsung’s screens often suffer from semi-psychedelic color distortion, but I didn’t see any oversaturated colors on the Dell tablet’s screen. The blackest blacks looked crisp and deep, even while watching dimly lit scenes from the Vikings.

It’s hands down the most beautiful Android tablet I’ve ever held.

I found myself using the Venue 8 7840 the same way I use my iPad Mini: as a place to stream shows and movies or read a good book. The Venue is comfortable to hold, thanks to its narrow bezels and light weight. In fact, I found it easier to handle while reading than the iPad Mini, which is 10mm wider, even though it has a smaller screen. The wide bezel at the bottom also rested easier in my palms.

Dell popped just 16GB of storage into its latest Venue tablet, but you’ll be able to expand that amount up to a whopping 512GB, so that should be more than enough room for most people.

Since a 2.3GHz Intel Atom Z3580 processor and 2GB of RAM power the tablet, things run pretty quickly. I didn’t notice any delays while streaming video from Netflix or browsing the Web, or any other common tablet tasks. The only times the tablet had a delayed response was during screen rotation and image processing, due to the complex calculations of depth that are going on inside. The Venue 8 7840 was also a bit slow to start sometimes, and took a few seconds to warm up to speed. The lag was minimal, although the screen rotation delay was irksome.

Tablet cameras are notoriously bad, but Dell’s Venue 8 7840 has a slew of cool camera features that you’d normally expect to see on a camera-focused smartphone. In fact, some of its ideas draw from earlier projects by HTC and others. Remember HTC’s UltraPixel camera with depth-sensing technology, which let you adjust images to give them a sense of depth? Well Dell’s gone and done the same thing — only better.

The depth-sensing cameras on Dell’s latest Venue set it apart from every other tablet on the market.

The Venue has what’s called an Intel RealSense Snapshot Depth camera system, which includes one 8-megapixel camera and two 720p stereoscopic cameras on the back of the device, which all take images simultaneously to record detailed depth data. Thanks to that info, you can edit photos from the device to show depth in a number of ways.

I took a bunch of photos around NYC to see how well it worked on buildings and such. Although there are an impressive number of filter options to choose from, the most striking one was decidedly the black and white one. When I moved my finger up the image, a tool popped up, showing distances ranging from 3.7 to 11 feet. As I moved my finger towards 11 feet, the front part of the image turned black and white, while objects in the background stayed in full color. The opposite occurred, as I moved towards the number 3.7.

This effect looked particularly cool when I photographed a bright red apple in front of a cityscape in the distant background. It also worked best when the differences in distance were more extreme.

Dell’s tablet occasionally misjudged distances, however. For example, the apple was less than 3 feet from me, yet the software couldn’t tell — at least not in that shot – colorizing incorrectly as I adjusted distances. In the next photograph I took, it got the calculation right, and colored the whole apple and nothing else (except a bit of the nearest building).

The tablet also took its sweet time processing depth data and melding the photos together into one shot. It was the only time the tablet truly lagged — except on start-up, which took a while. Nonetheless, editing photos to show depth is undoubtedly fun, and Dell’s Venue 8 7840 does it better than the HTC One M8.

All that cool depth-sensing technology isn’t just for fun and games, though. Dell also built in a measuring tool (it isn’t available to consumers just yet, while Dell makes some adjustments) that lets you measure lines and calculate the area of the space you photograph. I’m currently in the process of moving, and I used it to gauge furniture and wall space to see where different things would fit. The measurement tool was extremely useful and fascinating.

Of course, sometimes Dell gets the actual measurement wrong or can’t calculate it at all, but usually it’s pretty darn accurate if you take the picture straight on from 3 and 15 feet away. The only issue is holding the tablet correctly, so as to avoid covering up the cameras.

The image quality of the shots is also quite good, and you can take regular shots without depth of course, as well as panoramas. There’s also the obligatory 2-megapixel front-facing camera for you crazy tablet selfie snappers (please stop doing this).

Overall, the depth-sensing cameras on Dell’s latest Venue set it apart from every other tablet on the market. If you’ve always laughed at people who take pictures with tablets, as I do, the Dell Venue 8 7840 may change your mind. If you need to measure anything, or just want a really cool effect for your photo, Intel’s RealSense technology will take care of it. I ended up using the camera way more than I expected.

The only thing Dell needs is Lollipop

If the Dell Venue 8 7840 had Android 5.0 Lollipop it would be even more attractive. Until I saw Google’s latest refresh, looked dark and cluttered to me. While KitKat is the least guilty, it’s not up to snuff with Lollipop, which is bright, fresh, cheerful, and stylish. Material Design pulls together into an attractive package that makes you want to use Google’s apps for everything.

The last tablet I tested was the Nexus 9, which runs Android 5.0 Lollipop in all its glory. It’s clear that Dell didn’t add much to stock on the Venue 8 7840, but it sure would look and work even better with Lollipop onboard. Dell will probably update its Venue 7000 series tablets with Lollipop sooner rather than later, but it’s too bad this tablet didn’t ship with 5.0 installed.

Battery life on the Venue 8 7840 was a solid 10 hours. The 5,900mAh battery pack kept the tablet going through video streaming and other typical tablet activities without a problem for long periods of time. While 10 hours is decent battery life, it’s pretty standard for tablets at this point.

In the past, Dell has made average tablets for very low prices. The Venue 8 7840 is a wonderful exception to the rule, and a truly amazing tablet. It’s the best-looking Android tablet I’ve ever used, and second in performance only to the Nexus 9. It could easily replace my iPad Mini, as it’s actually more comfortable to hold than Apple’s smallest tablet and has a sharper screen.

Its standout feature isn’t just the sleek design — it’s also the amazing depth-sensing cameras Dell included. Most tablets cameras are both useless and terrible; the Venue 8 7840’s is neither. I found myself using it more often than I’d expected, and I imagine most others will too.

Deciding between an iPad Mini and the Dell Venue 8 7840 is a tough call, as both have gorgeous looks and strong specs. The iPad Mini delivers a smoother experience, but you’ll miss out on the cool camera tech of the Dell tablet.

If you’re really into pure Android and are drooling for Lollipop, the Nexus 9 is your best alternative, despite its shoddy plastic back. Who’s to say when or if Dell will finally update? But if you’re an fan seeking a tablet with looks as premium as its performance, the Dell Venue 8 7840 is the one for you.