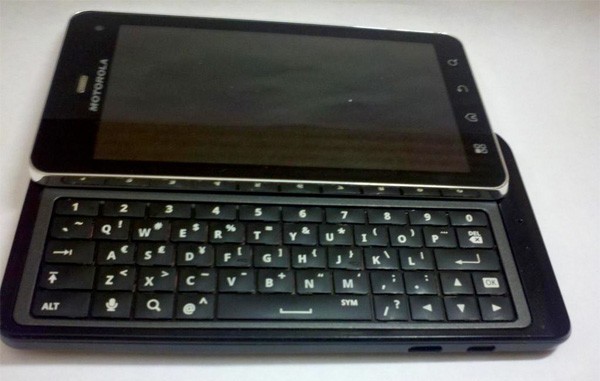 To the delight of Droid X fans everywhere, the Droid X2 will land in stores this week. Now, we don’t expect news of a Droid 3 leak to overshadow the Droid X2’s launch in the slightest, but it’s still worth noting for Android loyalists who can’t get enough of the brand and their mega-sized screens.

“Leaked” photos of the Droid 3 allegedly surfaced over on Howard Forums a week ago, revealing a slideout QWERTY keyboard with the minor adjustment from the original of including five rows instead of four (meaning there are now dedicated numerical buttons). Otherwise, the phone looks largely similar to the Droid 2. But over the weekend, TechnoBuffalo was able to come up with some details on what’s going on under the hood. “Thanks to a reliable tipster with a history of providing us with confirmed information,” the site says the Droid 3 boasts a 4-inch qHD (quarter HD) and a dual-core processor, most likely a NVIDIA Tegra 2 processor or “potentially” a Texas Instruments OMAP processor.

The device will have an HDMI output, a front-facing camera, and rear-facing 8-megapixel camera. LTE support is highly unlikely – a strange choice considering the progress Verizon’s been steadily making on expanding this technology – but it should be available sometime next month.

The Droid 2 was marketed as a GSM-capable business-class handset, and while it was a popular device, the more efficient touchscreen and improved power will undoubtedly make it more attractive to its serious users. The choice to not make the phone LTE-equipped eludes us, however. Otherwise, it sounds like the Droid 3 is shaping up to be an impressive addition to the line.