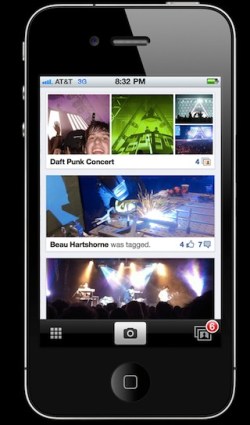 Facebook has a secret iPhone app in development, and it’s totally “killer,” reports MG Seigler at TechCrunch. The new app from the social network kingdom is like nothing anybody’s seen before — at least not all in one place. And with any luck, it’ll be on your iPhone or other iOS device sometime in nearby future.

According to Seigler, who received “roughly 50 MB of images and documents outlining the entire thing,” the app is like a combination of a bunch of other popular photo-sharing apps all thrown together. “The best way to think about it,” says Seigler, “appears to be Path meets Instagram meets Color meets (Path’s new side project) With — with a few cool twists.” Whew!

That description may be more than most people can process. But unfortunately, that’s the best Seigler can do at the moment. And since he’s still sifting through the massive cache of data he was handed on this classified project, we don’t yet know a ton about the specific features. But let’s make a few guesses based on what we do know, shall we?

For starters, Facebook’s app seems to only include photo-sharing functionality (though Seigler says it’s possible that it could be later integrated with the full Facebook app), which is similar to the picture-centric social network of Path. Chances are this app will, like Path, make it extremely easy to share photos with friends. And the photos will likely appear in a linear fashion, like they do in Path. The best part of Instagram is, of course, the ability to quickly and easily edit photos to look cool. This is also a hot feature in the popular Camera+ app. So we expect some sort of in-app photo editing. The Color connection could mean that photos taken by anyone around you appear in a public stream in the app — a feature that could, once again, outrage privacy advocates. And With, which is all about taking pictures with other people, basically stole its idea from Facebook’s tagging, so it’s no surprise there are similarities there.

As the app is still very much in development, so there isn’t yet a release date, or anything else even close to a concrete fact. But Seigler says there is “a lot more” to come, so stay tuned.