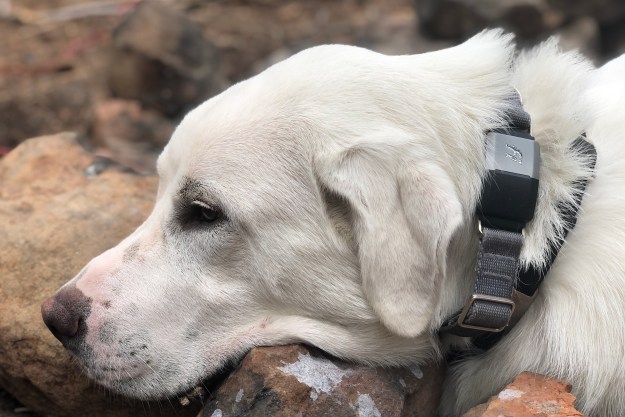 “Set it and forget it. Fi is the GPS dog collar you'll almost forget needs charging.”

We hadn’t spotted any tire tracks crunched into the snow on the way into Wallowa-Whitman National Forest. Fat, wet flakes were parachuting down so fast, we likely wouldn’t. There was no sign of anyone, or anything, else nearby.

Our Great Pyrenees mix, Marty, had walked off into the woods. In the middle of desolate Central Oregon. In a snowstorm.

My girlfriend and I hoofed after him in snowshoes. As his curly white tail disappeared over a ridge, she called his name with a tinge of panic in her voice, and I grimly contemplated his odds. Last night he curled up next to the fire in our rented A-frame. Tonight, he’d be alone and shivering in the woods.

Luckily, Marty returned. After what felt like hours, but was probably just minutes, Marty wandered back in our direction. Clipping the leash on his collar felt like catching a fumbled wine glass. Still, his solo adventure made me realize that Marty, a dog who eats his own eye boogers, is too stupid to be left to his own devices in the woods.

As it turns out, there’s a gadget for that.

A new kind of collar

Search for a GPS collar, and you’ll find two varieties. There’s burly hunting collars from Garmin, and sleek trackers from Whistle. The former last about 24 hours on a charge, and the latter about a week. I already have to recharge an armada of gadgets from bike lights to video doorbells, so I opted for Fi, a game-changer that promises up to three months of battery life from a single charge.

Just a bit bigger than a box of matches, the Fi practically disappears in Marty’s curtain of neck folds. He didn’t seem to know it was there. He’s also slept on a pile of Ikea screws, though, so he’s a poor test subject.

Besides serving as an emergency beacon for your pooch, the Fi tracks steps like a Fitbit. I’m not interested in tracking my own steps, and even less interested in Marty’s, but it’s gratifying to see the number after a long stroll.

Like a Scandanavian escape room, the Fi app looks gorgeous, though it’s clean to a fault. You’ll need to randomly tap and swipe on things to discover every function because the usual visual cues have been swept under the rug in the name of tidiness. For instance, the main screen shows a map of where your dog is right now, and his step total for the day. Want to see a map of yesterday’s walk? It’s not obvious how you’d do that. I learned quickly, though, and the app’s sleek presentation does put the most important information — where your dog is — front and center.

I stopped short of intentionally setting Marty loose, but I did activate the “Lost Dog” feature while my girlfriend was walking him without the app installed, which Fi perceives as a runaway. You can also set up safe zones to trigger this automatically when your dog leaves home. After activating it as she left the house, I waited. And waited. The Fi app told me it was still hunting for a GPS lock. By the time it located Marty, he was blocks away.

Those are excruciating minutes when your dog might be darting under the wheels of the UPS truck. Why can’t the Fi find your dog as quickly as your phone’s GPS? The collar has a smaller antenna than a phone, a smaller battery, and it can’t use Wi-Fi to assist. Though future software updates could shorten the lag, the delay after an escape isn’t likely to change soon.

Hikers and campers should also take note. The Fi requires both LTE and GPS signal, so it won’t work off the grid. That’s an understandable limit of the technology, but even on a hike when my cell phone showed two bars of LTE signal, the Fi app could not connect to Marty’s collar. Using AT&T cell towers means you’ll need to pay $99 a year for a Fi subscription, as well.

Battery life, however, is fantastic. I forgot I had to charge it at all. You can get at least two months from a charge, and three seems doable depending on your dog’s activity. We made a habit of taking it off to charge whenever we washed Marty, but we didn’t need to. It’s waterproof. His jowls just dry faster without a collar.

Naturally, that’s when Marty escaped. I forgot to close the garage door, and as Marty moped around in his post-bath angst, he found his way outside and vanished. I found him rooting around my neighbor’s pear tree, scarfing down rotten fruit. Sans collar, I had to scoop him up like a forklift to get him home. Another neighbor walking her dog gave me an understanding laugh as I ambled across the street with 90 pounds of annoyed dog.

There’s a lesson here. They say the best camera is the one you have on you, and the same could be said for GPS dog collars. Though Marty escaped in the narrow window I took his Fi off, that’s on me. Class-leading battery life means this is a collar that’s always on and always ready.

Nothing else lasts this long. The new Whistle Go Explore comes closest with 20 days of battery life, and costs a little less at $130. The popular Findster Duo+ needs charging every week, but it works off-the-grid, and has no subscription fees, so depending on your priorities, it may be a better alternative.

Marty’s tracker has sustained the superficial scratches you’d expect from living on a dog’s neck, but it shows no signs of dying. Like all devices with a lithium-ion battery, you can expect its life to fade with use.

Yes. The Fi delivers peace of mind without the nuisance of weekly charging.

If you are looking for more, check out this collection of the best GPS collars.

Topics
Video-editing app LumaFusion to get a Galaxy Tab S8 launch
The best Bluetooth trackers for 2023
The best rideshare apps in 2023: top 11 apps to check out
iPhone 14 safety features alert rescuers after canyon plunge
The best Samsung Galaxy S22 Plus cases and covers
The best rugged smartphones for 2023
The best iPhone games in 2023: 31 games you need to play right now
This Apple leaker just revealed tons of changes for iOS 17 and iPhone 15
Beats Studio 3 headphones are $120 off today at Amazon
How to cheat in Words With Friends
Trading in your iPhone with Apple? You’ll get less than yesterday
The best QR code scanning apps for iPhone and Android in 2023
3 reasons you should buy the Google Pixel Watch today